In a Kindle free zone


We honestly couldn't help it!
We were so close, we had to go.
We went to Hay on Wye, the town of books. A kindle free zone!
We've made the trip to Hay on Wye every trip to UK, usually though we are shipping a car back to Australia so baggage weight is not a consideration. This time we each have a 30kgs allowance, so will bear that in mind.
We drove around town until we spotted a big old house with a B & B sign in the garden, we rang the bell but there was no one home. I rang the phone number and was diverted to a mobile (as I'd hoped). I was told Yes we have a room, the door's unlocked, just go on in, have a look and if you like it take the room key and we'll see you later.With that hospitality how could we not take it? It was right at the top of the house, on the 3rd floor and had twin beds but it had a big parking area and from our previous visits we knew that parking could be an issue in Hay.  On our very first visit we drove into a town, and Michael went into the Information Centre and asked,"Where are all the books?" The ladies behind the counter said in unison,"In Hay on Wye, this is Ross on Wye!" Oops - but a common error apparently with around 80% of visitors to Ross on Wye really wanting Hay on Wye.
We were settled in the B & B by lunchtime so spent the afternoon book hunting. I bought 2 and Michael bought 6! He assures me that he won't be taking them all back home, at least 2 will be left behind.  Then with aching feet we climbed the stairs and had a rest before going out for a curry - a very good one it was too. 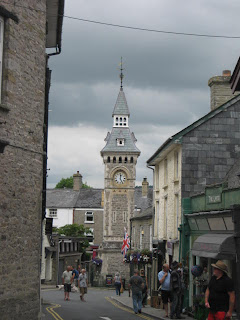 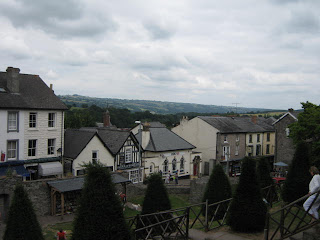 Next morning we awoke to look out on shiny, wet streets - not so much from rain but the clouds had descended in the night. As the sun got stronger the mist lifted a little.
We left Hay on Wye for our Top Ten road. We got on the road at Talgarth and although it was a nice road it was not a spectacular road; we could both think of better roads travelled on this trip alone.
Then just south of Bwlch the road zigzagged through the tiny village of Coed-yr-ynys, over a very,very narrow,'weak' bridge. This bridge had warning signs and restricted width notices all over it, and for miles as we approached. We saw why, it was an ancient gem, and one large truck or bus could demolish it.
After the next village of Llangyndir the scenery was truly splendid, we climbed up onto the high plains of the Brecons and just had to stop and get out of the car. This was stunning. National Geographic have got it right, this IS one of the top ten drives in the world. 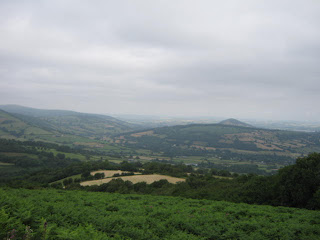 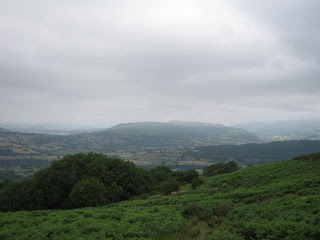 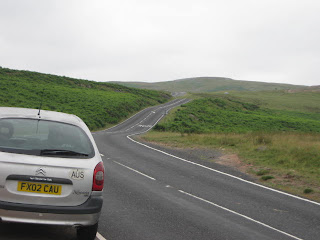 We carried on, winding our way down into Rassau near Ebbw Vale in South Wales - Coal Country.
The scenery changed so suddenly and so dramatically it was as if someone had changed channels on us! No more green hills, no sheep, no winding roads, all replaced suddenly by busy highways, industry and housing.
We turned eastwards and headed to the town of Abergavenny, which is in the countryside not industrial. It was not an exciting town, the usual country town on a quiet Sunday morning, but we spotted some activity and found a small 'antique fair' in the old market hall. Nothing caught our attention on the stalls until Michael spotted some very interesting, unusual model cars - a Citroen H Van, a Chenard Walkcer van and an early Renault van. Very nice until we saw the price - 37 pounds each (approx. $60 EACH), so nothing bought at all.
The decorations hanging from the market hall roof were very nice. 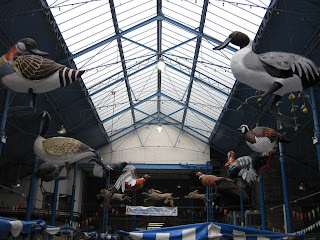 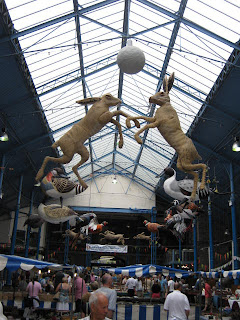 After Abergavenny we carried on east to Monmouth on the Welsh border; another sleepy, Sunday country town. Monmouth has a lovely Medieval gateway over the River Monnow. We stretched our legs, taking a walk around town and having lunch then left Wales and turned into Gloucestershire and the Forest of Dean. 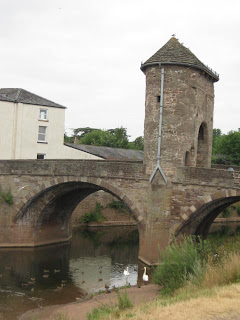 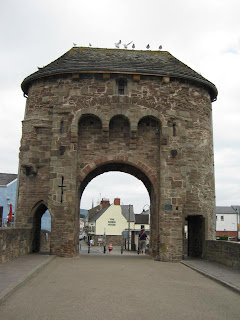 Mistakenly I had conceived the Forest of Dean to be a little rural idyll. Wrong - Michael explained that it is an ancient forest area but has a large mining industry. Instead of quaint villages we drove through utilitarian housing estates. (I should have paid more attention to the background in those Dennis Potter plays).
We decided not to continue through the Forest of Dean all the way south to Chepstow and over the River Severn. Instead we headed up to Gloucester and used the bypass around the city and drove south towards Bath.
We were on the lookout for a B & B in one of the villages but didn't see any accommodation at all on the outskirts of Gloucester or Stroud. Cotswold village names like Tetbury, Badminton, Malmesbury and Chipping Sodbury appeared and I began to think that the budget would be exceeded tonight.
Before reaching the outskirts of Bath we turned off the main road and headed towards Chipping Sodbuy. We passed through the village of Old Sodbury and as we passed the village pub - The Dog Inn, we saw a sign advertising accommodation from 37.50 pounds (obviously per person). We turned around and went in to ask. A lady sitting in the pub said, 'Accommodation for tonight? I'll show you a room, it's across the road" It turned out that she owned the pub, a house across the road that she used for B & B, (and where breakfast was served even if you stayed in the pub), and she lived in another house in the village. It all seemed a bit chaotic but the price was right and the room was large and airy.
We were staying in the Cotswolds without breaking the budget.
Although tired I decided to sit in the garden whilst Michael had a nap, the weather was just lovely.
The only drawback was that there was no wifi in the house, it was available in the pub but I wasn't inclined to move from my spot in the garden.
The way I write our blog is that I write it all out in a notebook each evening, whilst the facts are fresh and then when we get cover I log on and 'publish a new post'. Call me old fashioned but I still find it easier to scribble on a pad than to sit typing, especially at the end of the day, (often with glass in hand).
We wandered across the road for a pub meal. Earlier on the lady had said that things were chaotic and she was short staffed, that should have been a hint - we waited 55 minutes for our meal! 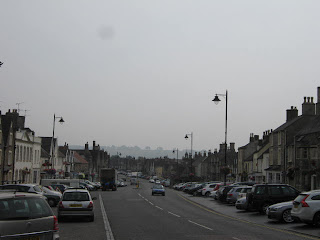 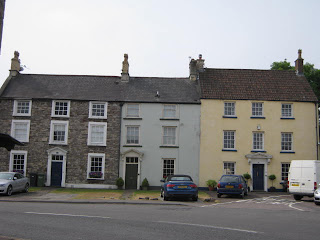 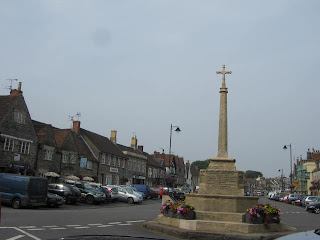 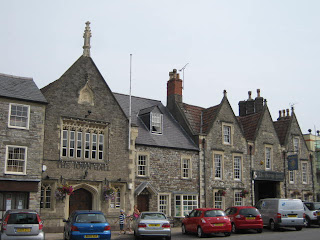 The next morning we reviewed our schedule and decided to spend another night at the Dog Inn, if we could, and have a day touring around some of the local villages. We got to stay another night despite the room being regularly booked Monday to Friday by a business man. He lives in Notting Hill in London, works near Old Sodbury and has been using the Dog Inn B & B during the week for the last 18 years! (Yes, that's right years, not months! You'd think that he could have bought a second house with the money). The landlady was going to put him up in her own house for the night!
A canny lady, not willing to let any money go by.

So with that settled we set out after breakfast and drove into Chipping Sodbury. What a nice little town. I suppose that if you lived locally you would tire of it and wish for more choice but Bath and Bristol are a short drive away. We were particularly struck by the parking notices - parking can be a nightmare in English towns, with some very draconian rules. But in Chipping Sodbury one side of the street is privately owned and there is free parking all day.
The other side, there are restrictions - 4 hour parking only.
The notices say:- Please do not park illegally.There is free parking available.
What a nice attitude, and no one was parked illegally or even slightly at an angle or in anyone's way - we went into the tourist centre to tell them how much we liked their attitude.

Then we drove down towards Bath but detoured to the tiny hamlet of Bathampton, on the Kennet and Avon canal, before heading out through Bradford on Avon to the market town of Melksham. We had lunch by the river in Melksham before heading through to Calne, where the road works in the high street caused traffic chaos, and we carried on through Wootton Basset up to Malmesbury. 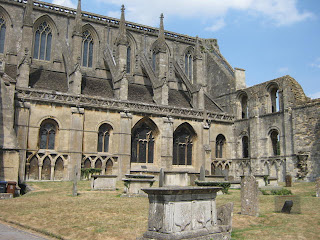 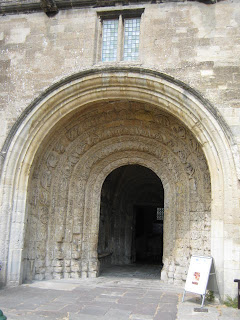 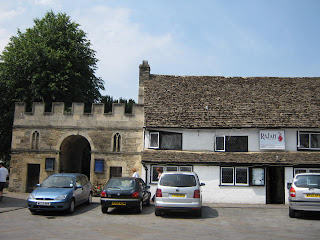 Here we got out and strolled around this lovely town. The old Abbey and the Market Square were delightful. Michael particularly liked the juxtaposition of old and new - the old Abbey entrance and an Indian restaurant.
Then it was time for a little rest before going into Chipping Sodbury for dinner at the local Thai restaurant. 'Siam Thai' - isn't that Thailand Thai?
On the way back to base we detoured further into the village of Old  and walked around the 13th Century Norman Church of St John the Baptist. Built between 1200 and 1225 on a knoll overlooking the village. The views were stunning, we could just make out both Severn bridges in the distance.
A lovely end to the day, and supposedly an end to the heatwave as thunderstorms are forecast for the next 2 days. 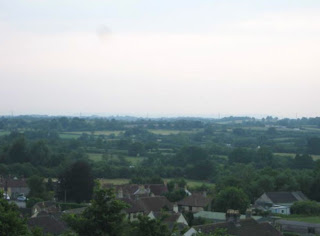 Early next morning we thought the heatwave had finished with a bang as we did have some thunder and lightning but there was barely a trace of rain. (some areas in Northern UK did get storms).
The B & B had filled up yesterday and someone started work very early, because the floorboards above us were creaking from 6.30am, then there was the 'Good Morning' jolliness in the dining room (near our room) before the Goodbyes and then the washing machine (in the laundry behind our bed heads) started up. So no more sleep for us.
After breakfast we resumed our touring - more picturesque villages on narrow roads.
We stopped in Devizes to specifically see the Caen Hill Locks on the Kennet and Avon Canal.
The Devizes flight consists of 29 locks - from locks 50 to 22. Caen Hill is from locks 44 to 29.
But we were to be disappointed as the first lock out of Devizes was under repair so there was canal traffic. We walked a short distance along the tow path but to be a 'gongoozler' you have to have canal traffic to watch going through the locks. 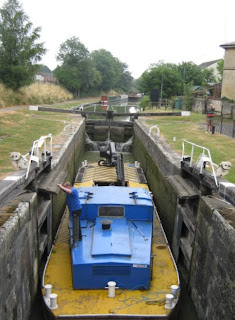 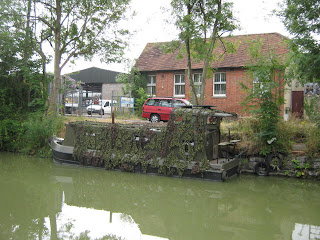 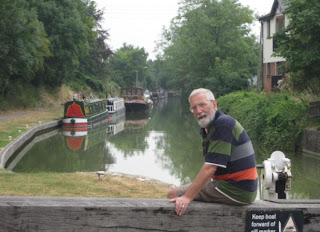 So it was time to hit the road again, we drove through Marlborough, Hungerford and Wantage. None of these towns appealed as an overnight stop so we decided that as we were quite close to Reading, and had only seen Michael's sister for a short time, that we would drop in and see her. (We phoned her and got an invitation for a couple of nights stay). On the way to Reading we visited Newbury again.
After a snack and coffee we carried on to Reading, detouring to a little place on the canal, called Woolhampton. It is a little further along from Sulhampton where we had visited previously. Woolhampton also has a swing bridge, and it has a nice pub with a large grassed area to sit and watch boats go by.
What a water-related trip this has turned out to be. River Cruises, car trip on a Lake, Norfolk Broads and in just over a week we'll have a ferry trip to Ireland.

Posted by Big trip almost around AUS at 09:51