Monday morning and our 'serfdom' was at an end; Jim had started referring to us as his slaves so it was time to slip the chains and move on.
We always prefer to travel on 'roads less travelled' using B roads and minor A roads (the more numbers after the letter the smaller the road eg A 1015 is a lot narrower and winding than the A10, which may only be a dual carriageway in sections whereas the A1 would be dual carriageway with limited access roads.B roads are narrower still.)
We skirted the town of Stevenage, travelled trough some picturesque villages, bypassed Ipswich and stopped for lunch at a roadside van - anyone having seen The Catherine Tate show will recall Neville and partner at their lunch van. There are hundreds of these vans along the highways now - they used to be popular in 1960s and 70s, then seemed to disappear as fast food chains took over, now they're back.
We travelled through some really beautiful Suffolk villages, pink cottages with amazing thatched roofs. We stopped in Woodbridge, 'an amazing market town with a remarkable amount of activities to take part in'. Well ignoring the bad grammar they were a little off the mark. It is a lovely quiet rural town and is on the estuary of the River Deben, the edge of the Norfolk Broads, close to the Saxon burial mound of Sutton Hoo and near Bawdsley Radar Museum; but a 'remarkable amount of activities', I do dispute.
We drove into the town, found the tourist info centre, got accommodation leaflets, chose a B & B and gave them a call. As it was after 2pm and we wanted a room for that night we got a 10 pound discount and drove out to check in. We drove back into town in the evening for a stroll around,
the main street in town is called 'Thoroughfare' - nice! 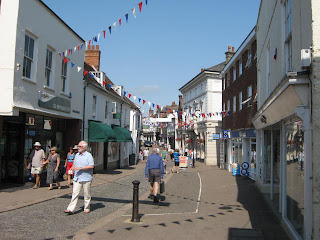 It's a cobbled street with vehicle access and parking only between 8-10am and 4-6pm (parking for 30mins only) just enough for the locals to carry on business. The rest of the time it's a pedestrian precinct - a good idea. One thing missing from the ambiance of the place was the cry of seagulls! Maybe because it's on a tidal river and the tide was out. We drove down to the Tidal Mill, one of a very few Tidal mills still working, but there was no parking and the tide was out -we drove back to the hotel to eat - a good choice, it was very, very good, really fresh food, well cooked.
Pre dinner I enjoyed a little glass of Argentine Pinot Grigio whilst Michael had a well earned nap. How he drives those narrow lanes (B roads) so confidently I don't know. Following a 3 tonne truck helps I suppose, when he brakes you brake!
The only slight drawback to the whole place was the creaking floorboards and somewhere, someone was in bed early and was snoring by 9.30pm! The staff could not have been more helpful and the whole place was very nice, very well run. It's called Grove House Hotel if you're ever around Woodbridge in Suffolk.
Breakfast was very nice and then making sure that we hadn't forgotten anything we were on the road by 8.55am.
We headed south down to the coast, passing Sutton Hoo - but it didn't open until 11.00am, so we drove on.We were looking for the Bawdsey Radar Station and spotted some old buildings, then found a small sign saying that it was on Private Property, and only open a few days each year, next day would be July 28th.  So we turned around, and headed North East to the coastal town of Southwold. 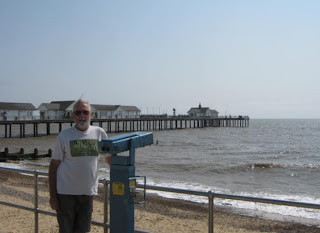 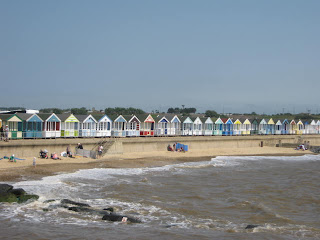 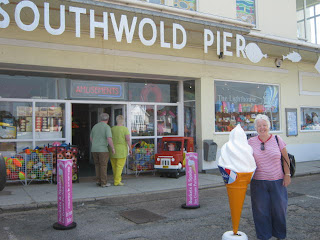 What an absolutely delightful town! It has a pier! With an amusement arcade and shops! A step back in time to our childhood! The temperature was around 19 degrees C (15 C in the water) but the wind blowing in from the sea - from Russia - made it feel much colder. 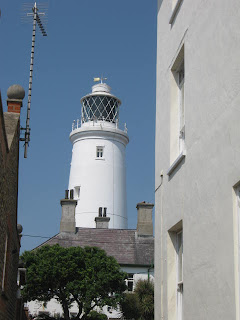 We walked around the streets near the beach, even I must admit, admiring a little bungalow near the seafront that was For Sale! (that moment has passed now). Then we drove around the rest of the town, surprised by how big it was, before continuing north into Norfolk and "The Broads".
The shallow lakes and waterways of The Broads were thought to have been naturally formed but it has now been shown that they are in fact medieval peat diggings which flooded around the 13th century.
Wroxham is at the centre of the Broads and that was our destination. We found the information centre but there seemed a distinct lack of enthusiasm, all we got was a printed list of accommodation properties.
We walked to the closest one, but it was all locked up and when we phoned there was no reply.
We drove to the second one - a No vacancy sign up and it was locked up too.
Onto the next one, this was the Old Coach House, it looked rather splendid and the host, Martin, showed me this beautiful large room with a king size bed and an equally huge and spotless bathroom.
We had planned to spend two nights here in Wroxham but Martin only had a vacancy for tonight, not tomorrow. We took it - it was too good to miss.
(Wroxham is the settlement on one side of the bridge, on the other side is the commercial settlement of Hoveton and woe betide you if you get it wrong.)
Whilst Michael napped I checked out the brochures looking for a boat trip the next day. 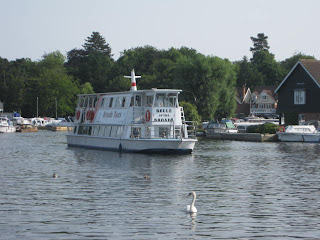 There was a huge company offering trips on large boats, taking around 150 people each trip or there was a trip on a replica wooden, Edwardian gentleman's launch, electric powered. This trip travelled up the River Bure to quieter spots and there was a chance to spot an otter - that was the one. 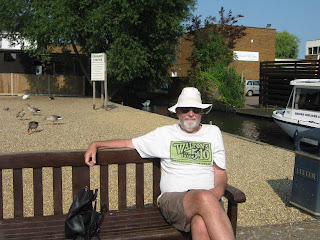 Later in the afternoon we walked into town, booked the 11.00 am boat trip and then sat and enjoyed the afternoon sunshine watching the rental boats returning from their day on the water. Some people had a better grasp of mooring than others, the very worst was the man in the white and gold braid Captain's hat (naturally). 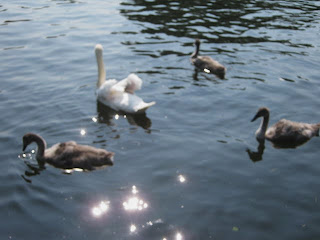 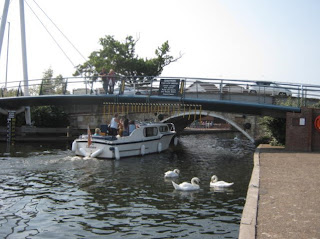 Rather than walk back and then come out for dinner later we decided to eat early - and at 6.00pm when the restaurant opened we were in the door of The Star of India. Another good choice. The food was excellent, we had a feast for less than 20 pounds.
The next morning we woke to grey skies and drizzle! We were assured that it 'would burn off'.
By the time we'd had breakfast it had indeed stopped raining but it was still very cloudy and we had to get our jackets out of the car. We spent our time before the boat trip wandering around town, bought rolls from lunch from Roys supermarket. This supermarket is opposite Roys department store, next to Roys cafe, across the road from Roys clothing shop. There is also Roys hardware, Roys garden centre, Roys baby shop and I'm sure that I've forgotten a couple. (The original Roy ran a bakery in nearby Coltishall).

We were ready and waiting next to the boat, The Liana, by 11.00 am, there was only one other couple on the trip (max is 8 passengers), they were an American couple from Manhattan.
Our captain was the 'less than enthusiastic' tourist info man from yesterday, but obviously sitting in the office is not his thing because this morning he's very chatty and knowledgeable. 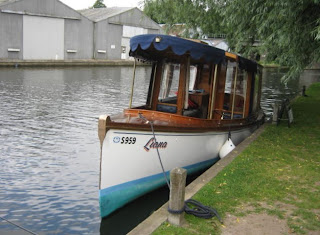 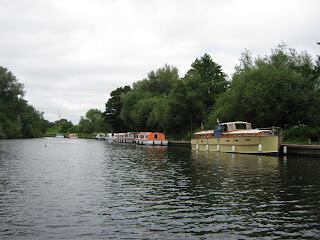 Michael was quick to spot the flash of electric blue as a Kingfisher flew ahead of us.
We were amazed at how vast and quiet the Broads are, especially when away from the main tourist hire boats. 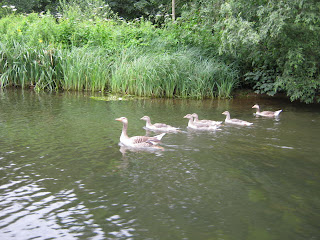 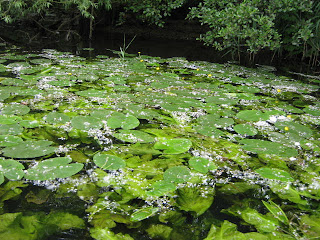 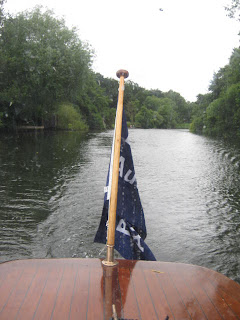 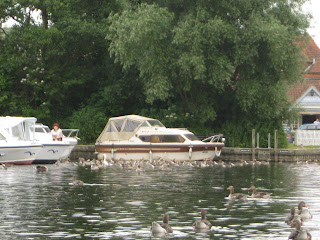 The trip was only just an hour long and so before long we were back in the car and heading up to the coast at Cromer. We parked on the cliff top and had lunch before following the coastal road westwards. 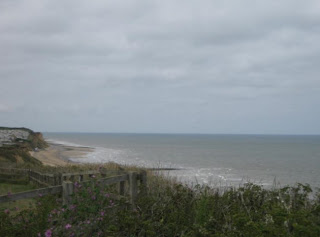 The villages of northern Norfolk were not as picturesque as those in southern Norfolk, they were built using a mix of round 'field' rocks and bricks. Neither of us found this particularly attractive, it was a little too 'in your face' for me.
On the outskirts of the little town of Weybourne we spotted a sign for the Muckleburgh museum. There was a drawing of a tank on top of the sign - that got our interest so we turned in.
The museum was the Muckleburgh military collection with over 150 tanks, guns and vehicles as well as extensive light weapons, ammunition and other exhibits. It also has a Medmenham Collection exhibit - about aerial photography. 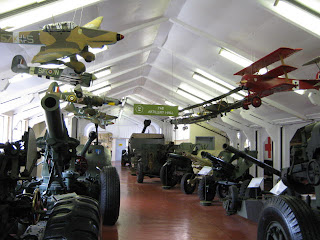 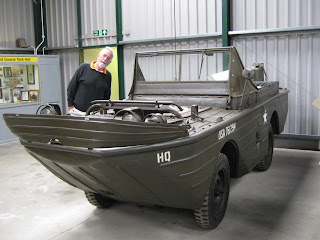 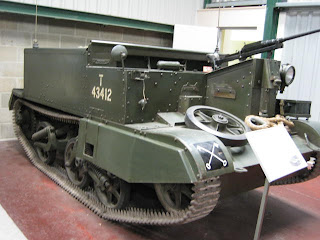 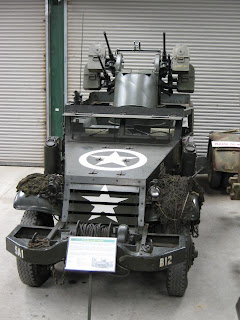 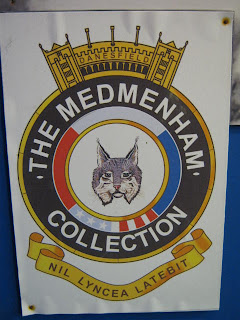 It was really good, glad we didn't miss it - especially the Medmenham exhibit.
It was almost 4.00pm by the time we left to continue westward. We stopped in Hunstanton and called into the Tourist Info centre. The lady gave me a leaflet, marking 3 B & Bs that had vacancies for tonight.
First one, the nearest, had a No Vacancy sign in the window but I knocked anyway - No vacancy. I suggested that he notify the Tourist office and we tried the second one.
This time there were 3 No vacancies signs on the property - I didn't bother to knock.
Next I rang the third one - they too had No Vacancies. When I suggested notifying the tourist office I was assured that they had been notified, they had know for two days that they were full for the next two day! We drove back to the Tourist office in disgust but it was now 5.05pm and the door was shut! Having a bad feel for Hunstanton we drove out of town ( our few pounds for accommodation and meals will not affect their economy but if we all spread the word.......).
We drove through some more quaint villages including one called Stiffkey (prononced Stookey?).
The streets were really, really narrow and on the outskirts of town a rubbish skip was being collected - traffic in both directions just had to sit and wait for 10 minutes.
We arrived in Kings Lynn amid the evening rush hour, no sign of anything touristy - a rather grey, busy town. We headed out to a major road intersection where there were 'services' as we needed the loo.
We were going to use McDonalds, as they always have clean toilets. When we pulled into the carpark we spotted in the background a Premier Inn. Not our first choice of accommodation as we prefer the more intimate atmosphere of a landlady and a Bed and Breakfast, but they are very clean and the beds are comfortable (we had stayed in one up in Shrewsbury). It was now almost 6.00pm so the choice was made if they had a vacancy - they did and we were in.
Next door to the Inn was a 'chain' restaurant - Brewers Fayre. They say that they do 'basic pub grub'.
Well, most pub meals we've had have been really good - we were both tired and hungry so gave it a go.
It's not on the top 100 list of places to eat!

Breakfast is not included in Premier Inn tariffs (an extra 5 pounds 25 pence for a continental breakfast, or 8 pounds 25 pence for a cooked breakfast) so the next morning there was only one choice - coffee and a bagel at McDonalds. Then it was on the main road for a direct drive to Lincoln.
We plan to spend 2 nights here enjoying the tourist sights before hitting the Transport Museums north of here at the weekend.

Posted by Big trip almost around AUS at 13:32