After a little walk around Bakewell the previous evening and a great breakfast we decided to spend another night in Bakewell, that left us free to explore the town and market without having to drive on and find another bed for the night.
We only had a 2 minute walk into town and got to the market nice and early (in UK early is 9.00am not 8.00am). There were the usual stalls - clothes, knick knacks, books, watches, etc, etc and a good selection of fresh farm produce and some excellent bakery foods. The locals were out in force and the buses were full bringing in 'locals' from further afield. We finally learnt what 'the famous Bakewell pudding' was, but as it was sweet not savoury we didn't indulge. (This is not to be confused with Bakewell Tart - which although sweet, we did indulge in - yummy!) 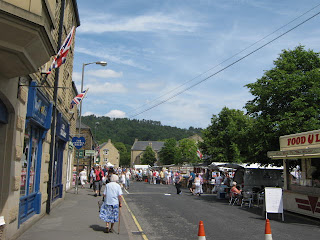 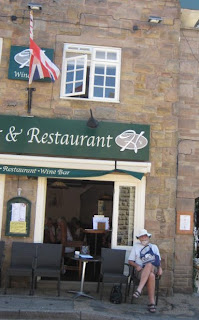 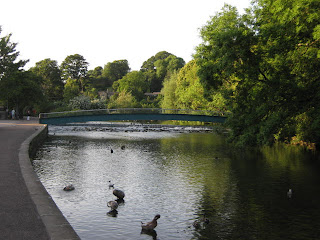 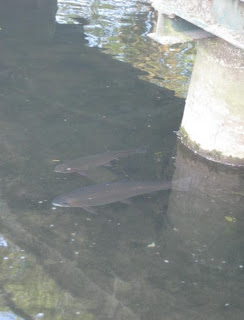 We strolled along alongside the River Wye,  and counted about 8 large fish. Were they trout?
Michael went back to the B & B after lunch but I carried on 'shopping', I found a fantastic needlework shop. I bought one item, but have their card as they dispatch worldwide.
The evening's aperitif was a nice Italian Soave ( 3 pounds, from the Co-op). Dinner was a choice between pub grub or an Indian - no choice really, it's Indian. Another good choice, another great meal. 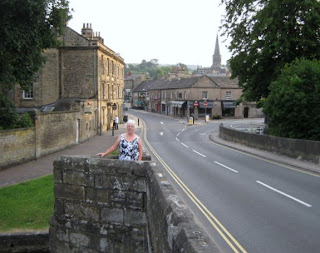 Next morning and it was off to tick another off 'the list'. We visited the Plague Village of Eyam.
I wanted to visit Eyam after reading the book The Year of Wonders by Geraldine Brooks. (one of my favourite authors).
First port of call was the Museum, a very good, little museum, with cheap entry but they didn't allow photographs, maybe I would have photographed a couple of exhibits (plague Dr ?) but didn't have to make that decision.
When the Plague arrived in the village in 1665, in a bolt of cloth from London, the village's two religious leaders led the villagers and the whole village was quarantined.  No one travelled out of the village, and they didn't allow anyone in. Food and supplies were delivered to the Boundary Stone, on the village outskirts, and the villagers left money in holes bored into the Stone.
They buried the dead as quickly as possible to avoid contagion, often without ceremony, in their gardens. In fact the church was closed and services were held out in open with the congregation standing at least 3 feet apart, to try and limit contagion.
The only plague victim who is buried in the churchyard is the vicar's wife - Catherine Mompesson.
Some of the cottages have plaques detailing who lived and died there, and one has to presume that all of the cottages that date from that time have a sad story attached. Some families lost all but one family member. 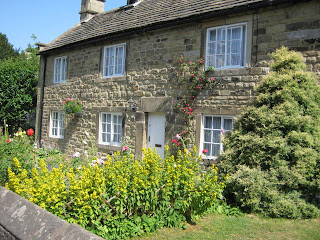 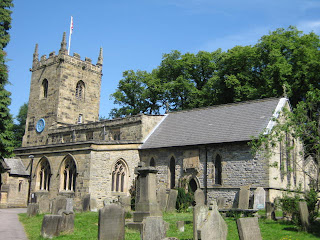 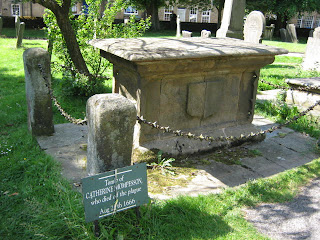 We left Eyam and drove to a tiny village, Litton, where amazingly immaculate dry stone walls form all the field boundaries. Fields large and small, no matter what size, have dry stone walls. Quite a sight.

Then we drove back across Peak District National Park to Congleton. This road was a lot quieter than the previous road had been, and perhaps it was even more stunning. We were both very pleased to have included this area on our little tour.

Then we drove south into Shropshire the little town of Wem - noted on my Birth Certificate, it's where my birth was registered. There was a large hotel and a little B & B - guess what, the B & & had No Vacancies. I asked anyway, it was true and they couldn't think of another one in town. Oh well.

We drove further on and were back in Shrewsbury, pronounced Shrowesbury remember.
The road we approached the town centre past a couple of  B & Bs that we'd stayed in in the past, one on our wedding night, (yes it was a long time ago, but Shrewsbury is a medieval town remember, so 1977 isn't that long ago here).
But it seems that it is too long for this particular property - it's closed because it's been deemed unsafe. The second place didn't have a vacancy, but gave us a list of phone numbers for alternatives. We rang around and the third one that we phoned (are we falling into a rhythm) had a vacancy and even paying extra for breakfast it was the cheapest so far. We drove there straight away.
It was just over the Welsh Bridge, close to town and on the road that we will be using to go into Wales tomorrow. It's our first pub room this trip. We've stayed in pub rooms in the past and the one big, no make that huge, drawback was the smoke that filtered through everything. That's a thing of the past now with No Smoking everywhere.
We ate early, to take advantage of the 2 meals for 8 pounds deal (between 5.00pm and 7.00pm)
It wouldn't challenge the Boar's Head in Long Preston but it was adequate, and cheap.
Then we took a stroll, crossing into the Quarry, (the town park), over the suspension bridge.
As youngsters we always used to bounce on the bridge and make it sway and creak - it still does it! 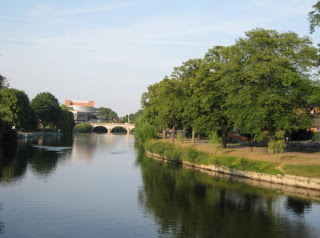 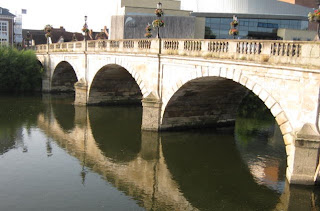 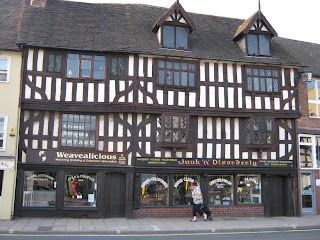 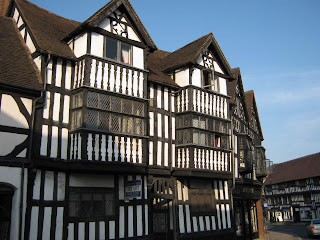 Next morning and we're off to Wales. Not 'Land of my Fathers' but land of my maternal Grandparents.

The first town in Wales that we came to was Chirk, not an exciting town but it has a large castle. We didn't visit the castle but found the northern gates too spectacular to ignore. 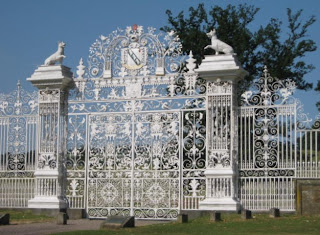 We carried on to Llangollen, home of the International Eisteddfod but our visit was to tick another one off the list. A canal boat cruise on the Llangollen Canal, across the Dee river and valley, on the Pontcysyllte Aqueduct.
Built by Thomas Telford in 1805 it's an amazing feat, and it was an amazing trip.The famous aqueduct is cast iron and sails  over the valley of the river Dee at a height of 127 feet, it's 1037 feet long. It was a wonder of the world when built and is now a World Heritage Site . 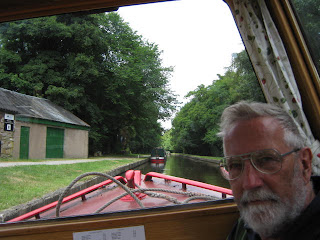 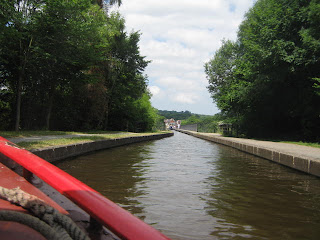 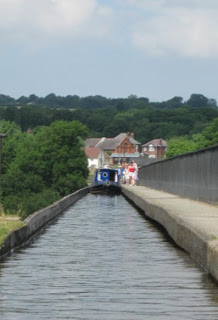 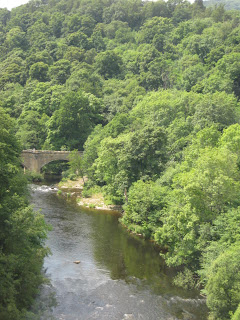 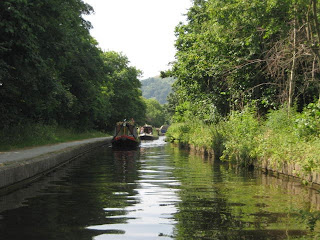 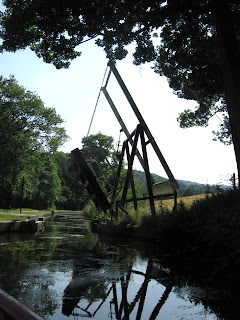 (If you make the trip, on a cruise, a tip is that when travelling from Llangollen the walkway and railings are on the left hand side of the boat, the uninterrupted view is therefore on the right. But if travelling in the afternoon that right hand side will be in the sun. If UK has another heatwave this will be relevant.) 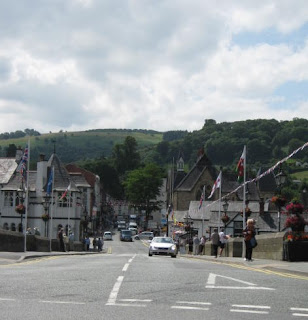 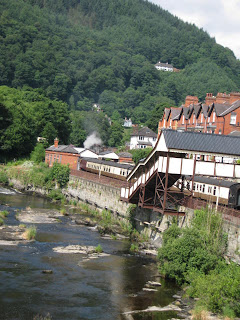 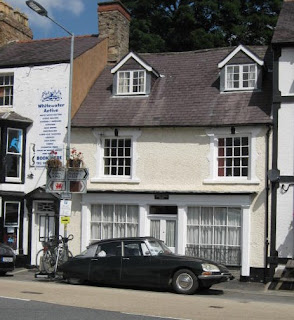 Back in Llangollen, after the cruise, we bought food for dinner and headed back for a quiet night in.
The next part of the tour starts tomorrow - heading for the mountains.

Posted by Big trip almost around AUS at 13:24