Reunion time!
We drove back to St Albans for a planned small family reunion. Organised so that the 'newly found' cousin from Sydney, Imelda, could meet some more of the family based in UK. Unfortunately due to some illness down in the Bournemouth side of the family this was cancelled.
Reunion number 2 was for me and my two best friends from high school. Cheryl (and Bob) live in St Albans and we were going to stay with them for a few days. Gwenda (and Rob) live in Bromley and were coming up to join us for dinner at Brasserie Blanc (Raymond Blanc is apparently a famous 'tv' chef here in UK). It was fantastic to all meet up again, and the venue was excellent. The only down side was that the chips were apparently worse than McDonalds fries, but as only one person (Michael) had chips that didn't spoil it for everyone. Gwenda is the only one out of the six of us who is still working - silly girl! Cheryl retired from teaching just a week earlier, at the end of term. It was all over much too soon and another date was quickly organised before we head home in September.

Three days later and it was time for Reunion number 3 - Michael's old mates.
We were all going to meet up in one of the 'old pubs' - this time St George's Tavern, in Victoria. (Handy for the station). We decided to drive into London as the train fare was dearer than the congestion charge! The day arrived and we set off - but we didn't get very far as the car just would not idle, it kept stalling. It was too dangerous to drive around to the garage so we returned to Bob and Cheryl's and called the AA. 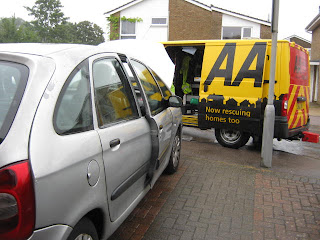 That took a while because the young people in the office did not understand about the international agreement with RAC WA and told us that we had the wrong organisation. Then we were put through to their international office. Eventually a very pleasant young man found us, he'd been dispatched by their Lyons office. In no time at all he had diagnosed and corrected the problem. (Dirt and dust gather in the butterfly valve in the idle valve and when damp and wet this clogs, a quick blow with an air hose and a tap with a blunt instrument fixes it).
Then we were off, in the constant rain, into central London. Michael didn't need me to navigate, he knew his way around. Me, I was lost. I sat there stupefied, amazed that Michael could look around and see how things had changed as well as keep an eye on the traffic!!
We drove all around town - Park Lane, Oxford Street and down to Battersea and Clapham, as the sun came out in the afternoon it was a lovely day out. 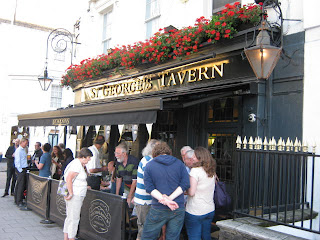 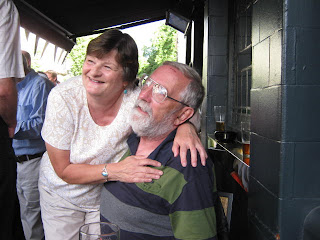 We got to Victoria in plenty of time and went along to meet the lads and lassies. We all managed to recognise each other despite the years and had a great night. In the old days it was down the road for a curry afterwards - things have changed a little, in that we went for the curry a couple of hours before last orders. We then went back to the pub for another little drinkie.
The drive home was much quicker, some areas being almost deserted but the southern part of the Edgeware road was really busy with late night restaurants and night clubs, this is 'little beirut', and as it's ramadan it's buzzing. Once north of these we had a lovely drive in the country side  through Elstree and Radlett before getting 'home' around 1.00am!

We left St Albans and headed back to Reading - trying to travel on different roads each time, we went into the little town of Wendover and then across familiar roads to get to my brother's house.
We wanted to take John and Pauline out to dinner and as we'd enjoyed our meal at The Cunning Man we decided to take them there.
We didn't drive the direct route there because that entailed going through Reading City and there were roadworks causing chaos enroute. We took the scenic, country route. We all seemed to think that we knew the way, but then the road we wanted to take was closed. We didn't have a detailed map or a GPS so 'winged it'. We aimed for the canal but drove in and out of one little village 3 times, each time taking a different road. Eventually we did find the canal but it was some way from where we wanted to be, but - there was a pub there.
So having set off for dinner at The Cunning Man we had a lovely meal at The Fox and Hounds.
I definitely made the right meal choice - Goats Cheese parcel with herbs, salad and couscous.
Washed down with a couple of pear ciders - yum! 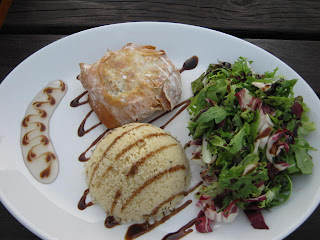 The pub was either very popular or a lot of people were lost because the car park was full.
There were 4 Lotus' in the carpark when we left - one each. I wanted yellow, Michael picked the orange one, John like the blue which left a red one for Pauline. 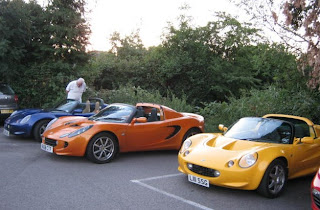 Then it was Reunion number 4 - this time we took the train into London to meet another cousin from Sydney. (We knew we'd never find a parking spot in Mayfair).
Helen, Imelda's sister, was only in London overnight before setting off on a round GB cruise. She had landed at 6.00am and was determined to spend time with us. She was waiting with her friend, Frances, in the hotel lobby when we arrived. (We met up with Michael's sister at Reading station and travelled in together). A short time later Jim arrived. Helen wanted to see things so we set off on a little local tour. Michael used to work around the area so was an excellent guide. We stopped for a light lunch before carrying on. Helen was enthralled with it all, red buses, red phone boxes, huge ornate buildings, old pubs, colourful parks and even a peaceful haven of a quiet church, all within a short distance. 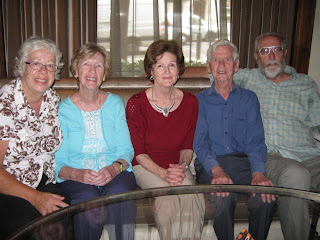 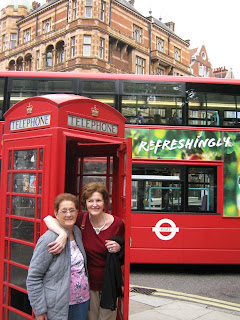 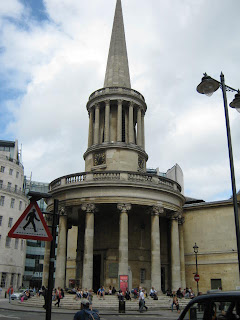 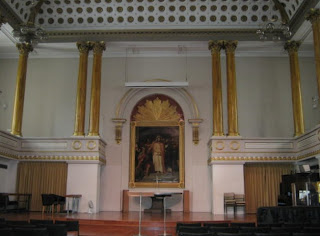 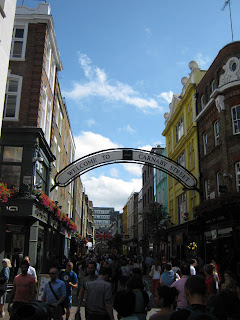 By 3 o'clock we were all getting tired so we took Helen and Frances back to their hotel to rest for a few hours before their 'welcome dinner'.
So we had done it - after 60 years the cousins from Sydney had met some of their mother's family.
Their mother had died in 1953 and the family had lost contact until we discovered each other last year.
Helen, unfortunately, will not be able to meet any of the cousins in Ireland as she's on her cruise but Imelda is off to Ireland soon, as we are, and there will be a gathering in her mother's home town.
So 3 out of 4 ain't bad!!!

Reunions over for a while - time for us to hit the road again.
Once again we headed north out of Reading, angling across country bypassing Cirencester, Cheltenham
and Gloucester heading towards Wales. We travelled through some more gorgeous Cotswold villages and headed for Ross on Wye. Deliberately so this time, no mistaking it for Hay on Wye.
BUT for some unknown, un signposted reason the roads into the town centre were closed off, the traffic was at a standstill. We turned around and headed north to Hereford. We found free street parking near the Cathedral, got a leaflet from the Info Centre on accommodation, found a cafe. Over a coffee we chose a B & B, made a phone call and booked in for 2 nights.
We are having a weekend in Hereford, getting a bit of culture,seeing a Magna Carta,and the famous Mappa Mundi.

Posted by Big trip almost around AUS at 13:50