The internet appears to be spoiling the art of travelling. I don't mean travelling as in Gypsies but travelling the country freestyle as a tourist. People are now expected to search and book accommodation online rather than, as we are doing, drive enjoyably around the countryside, find a spot you like and knock on a door. (One person I rang gave me a price but then told me that if I went on line I could get the same room for 10 pounds less - I found that odd as I wasn't enquiring about a room in the future, it was for that night, a couple of hours later!)
Tourism centres are changing too - they are no longer on the outskirts of towns, accessible for motorists as they enter cities.
Lincoln is a case in point, their tourist info centre is right in the heart of the city, in the centre of a pedestrian precinct, in the Cathedral Quarter. It's great for souvenir purchases but not too good when looking for information about how to get around the city or find accommodation.
(I know, people are supposed to check everything out on line first, download apps and maps etc.)

We managed to find ourselves in the centre of Lincoln shopping quarter and grabbed a street parking bay (30mins only). Then we followed sign for i and found ourselves walking up one of Lincoln's most famous streets - Steep Hill. A very steep cobbled street which leads up to the Cathedral and the info centre. When I got my breath back I asked about B & Bs and was handed a leaflet. It was actually a very good leaflet as all places listed were numbered and there was a map showing the numbers.
Aware of the minutes ticking away I decided not to pay the 3 pounds booking fee and we began our descent of the hill.
On the way back to the car, halfway down the hill I spotted a lovely, quaint, very old fashioned tea rooms. A delightful establishment - Bunty's Tea Rooms. The decorations were from the 50s 60s and 70s, and there were copies of the girls magazine 'Bunty'.
It was 12.30, we were hot and tired.
Michael needed no persuasion to risk a fine and so we stopped for lunch.
The sandwich came with a small bowl of coleslaw and some potato crisps, it was really very very good. Stopping there was the right decision food wise. And the news got better, we hadn't got a fine.
As there wasn't a warden in sight we sat in the car and phoned a few B & Bs on the leaflet...
1st one - no vacancy, 2nd one - no answer, 3rd one - yes we have a room for 2 nights and it's in the Cathedral Quarter, in the high part of town and has parking. Within minutes we were there and checked in.  Minster Lodge and Rachel our host were both very lovely.
After a rest, when it was a little cooler outside (summer is here with today's temp 28 degrees C) we walked around the Cathedral Quarter, staying up at the top of the hill so that we didn't have to climb it twice in one day! 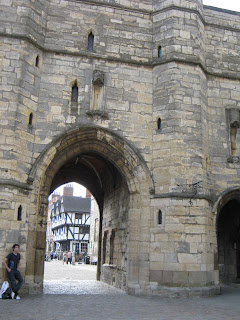 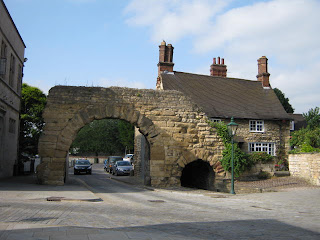 The Cathedral is undergoing some major restoration works, by the state of some of the stonework it's long overdue, but a mammoth task. 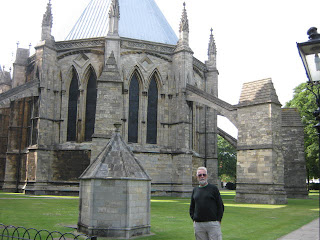 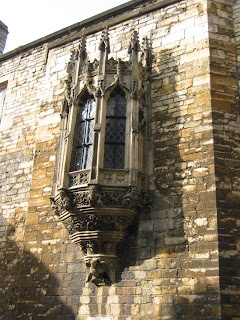 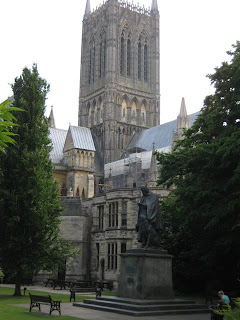 In the Cathedral close was a lovely group of Georgian houses, apparently they were the first houses to be numbered in UK. They are numbers 20 -23, but I presume when they were first numbered they were actually 1 - 4!? 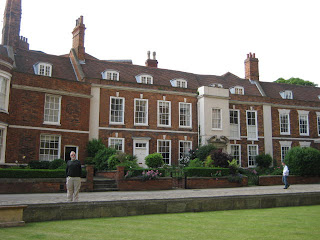 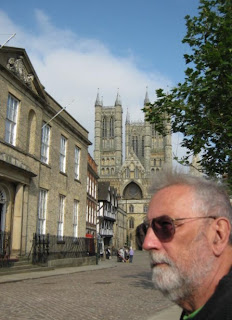 We sat in the Cathedral Square, between the Cathedral and the Castle, enjoying the cool of the evening, listening to a nice acoustic busker. Until BBC (tv station) arrived to film some item for something, first thing they did was blast some awful Brit Pop music all over the square (and neighbourhood).
Having caught our attention, they immediately lost it as we exited the square, away - in the opposite direction to which the speakers were pointing. Luckily that was towards the B & B not down the hill.
Dinner that night was Mexican - a  Special deal of 2 courses for 9.95. 2 great courses they were too. 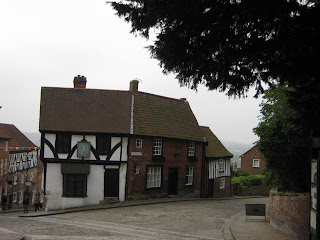 (The street on the left disappearing down hill is Steep Hill) 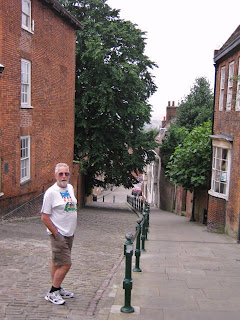 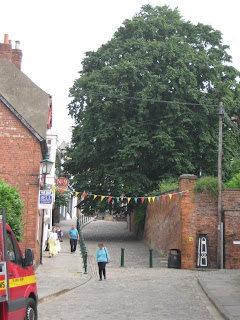 (The bottom of Steep Hill)


The next day we explored down the hill. We roamed the streets and shops stopping for a 'Pensioners Special' lunch of fish and chips in a tiny back room of a tiny shop. So that we wouldn't have to come out later and then maybe have to climb the hill twice in one day, we bought rolls, fruit and drinks to have for dinner. It was late afternoon when we did trek back up to the B & B, quite exhausted, but having enjoyed a great day out. Lincoln is a very nice town, but we suggest checking out accommodation before you arrive. 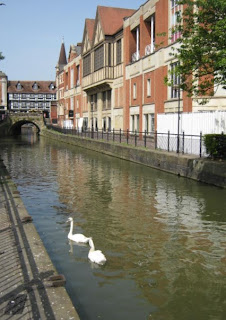 Next day was the start of the weekend - our weekend of Transport Museums.
We drove the short distance north from Lincoln to Sandtoft, near Doncaster. The Trolleybus Museum didn't open until 11.00am and we drove up just as the gate was being opened, at 10.54am.
This weekend the museum was having a 'special event' - a Teddy Bears Picnic. (Any child arriving with a teddy bear gets in free, there's a teddy bear hunt, and a picnic too). We didn't have a teddy  bear, so paid admission.
There were 2 birthday parties going on, lots of kids running around having a great time. There were lots of teddy bears around the museum too, on trolley buses, in trees, in all sorts of places. 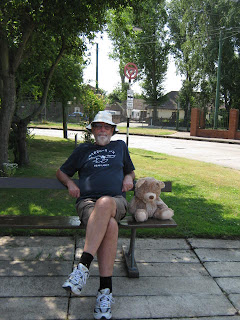 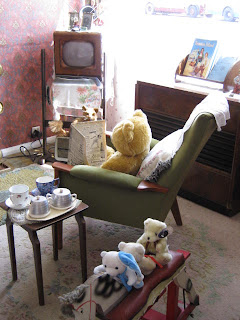 It was quite a small museum and the ride on the trolley bus was only short, but on the hottest day of the year so far (32 degrees C) the top of the buses was really very hot - after one trip we sat downstairs for the others. 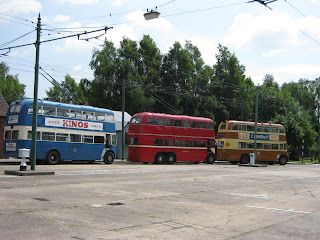 We rode on all three of the trolley buses out that day and we walked (squeezed) around those in the garage. 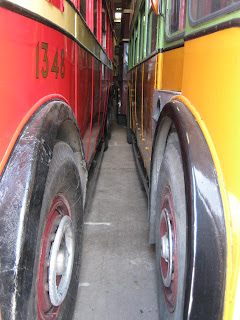 We had lunch at the museum before leaving, Michael treating himself to a 'chip butty'! 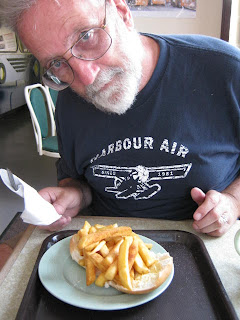 We took the motorway north to circumvent the cities of Doncaster and Leeds then we headed west through the Yorkshire Dales and some small English towns with familiar names - Ilkley and Skipton.
We were surprised to see both of these towns bulging with people and therefore not surprised to find all B & Bs full. We travelled on west but were starting to get a little worried as it was around 5.00pm and we thought that we might have to forego a family B & B and stay in a 'chain' motel.
In the village of Gargrave we spotted a B & B sign, and not a No Vacancies sign. We stopped but unfortunately the room on offer was an attic room with restricted headroom and no shower only a wash hand basin. But what a house, it was off the road and the back garden ran down into the river - when we stopped the lady of the house was paddling in the river. The house and location were stunning but none of us (landlady and her husband included) thought the room suitable. They did however have a friend in the next village along who ran a B & B and they knew that she had vacancies.
We were back on the road - along to Long Preston. The B & B was 'The Barn' and was converted from an old barn by the landlady's husband 26 years ago. Their back garden had been the cattle yards of the market. 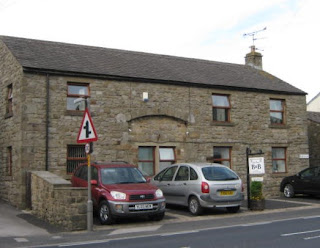 Unfortunately the bedrooms were at the front of the house (top right is our room) and it faced a very busy main road - fortunately they did have double glazing but it was hot and stuffy - solution was at hand, turn the fan on.
Across the road from the B & B was the Boar's Head pub, serving food all day. We went over, found a table and were very pleasantly surprised by the meal. This was no 'Brewers Fayre' pub grub. The meal was excellent, one of the very best in UK, 11 out of 10. (Will have to have a go at a pork, blue cheese and apple casserole, in a creamy mustard sauce when we get home.)

Next morning another culinary delight - black pudding included in the breakfast, and it was locally made, lovely.
Then we continued west heading for The British Commercial Vehicle Museum in Leyland, on the outskirts of the city of Preston. We used the motorway for the last few miles because the motorway exit was almost right next to the museum. The museum opened at 10.00am and we were their first customers, arriving at 10.10am. This was another museum that charged for photography, so no photos folks. (do they charge to make a few extra pounds, or is it because with photoshop etc, people can use the photos of exhibits to make something on line etc.?)

Michael had long chats with the volunteers about engines, gearboxes and the merits, or lack thereof,  of Leyland buses over A.E.C. buses. After soup and a roll for lunch, in the cafe at the museum, we were back on the road. We again used the motorway, heading south, to avoid the cities of Manchester, Bolton, Wigan and Warrington before heading east again.

We drove through the Peak District National Park. Neither of us had been to this part of the world before - what a truly beautiful part of the world. The scenery was spectacular, rolling green hills, dry stone walls, sheep and dotted through it all - walkers!
We were on the lookout for a B & B and in the town of Bakewell we spotted one, on the main road - 'The Melbourne'. They had vacancies, the room was nice and large, so was the ensuite and it was very quiet - we were in. Tomorrow is market day in Bakewell - we'll have to investigate.

Posted by Big trip almost around AUS at 12:43