Having visited the Transport Museums at weekends (not open during the week) and crossed the aqueduct it was time to slow down and meander through 'The Heart of England' (and Wales).
This really is beautiful country and I'm not just saying that because it's quite familiar and peaceful for me having spent my formative years in the area.
We left Llangollen and drove west and then south into Snowdonia National Park at Bala. We drove down alongside Bala Lake (Llyn Tegid) and into Dolgellau. Here we stopped to stretch our legs, use an ATM, and ask about which roads to take for some stunning mountain views. The ATM was so slow that Michael thought that it had refused our request and was about to walk away when the money appeared - everyone in the queue thought that was very funny!
The girl in the Tourist Centre confirmed that the road eastward to the village of Dinas Mawddwy (no, that's not a spelling error - and the names get better - or worse!) was stunning and went through some 'mass- siff' (emphasis on the second s) mountains. She didn't know anything about the small road / track that I'd read about leading from Dinas Mawddwy over the highest pass in Wales down to Llanwddyn.
We didn't spend more time than necessary in Dolgellau, as it's tall, dark grey stone buildings and narrow streets were quite depressing, even on a sunny day. 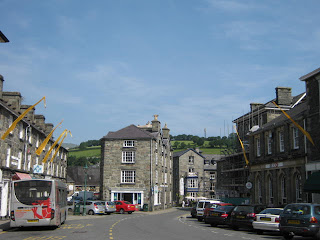 By now we were used to the road signs being in Welsh and English. Welsh was always first on the signs which caused some confusion at first, as reading from the top of the sign down we wondered why we couldn't make any sense of the letters. Were we going mad or were all the signs now written as anagrams?
We have learnt that Araf means Slow, and that Arafawch Nawr means Reduce Speed Now. (That's what the written English translation said, I think a more literal translation would be Slow lots Now!)
We left Dolgellau and drove through the 'really mass-siff' mountains on a very good road down to Dinas Mawddwy, there we turned onto a much smaller, un-numbered road to Llanmawddwy (11 letters, only 2 vowels). This was a narrow, windy road but really no worse than others and the views were fantastic. 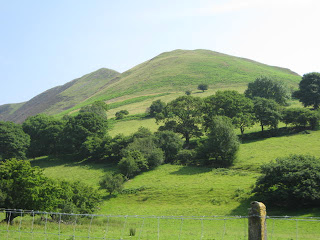 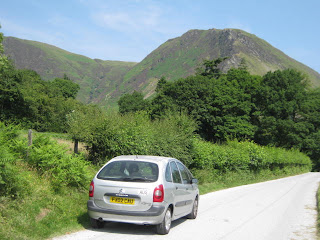 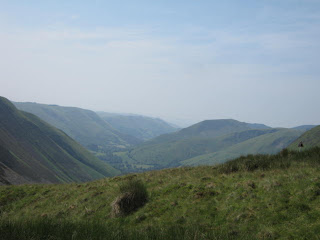 Then we rounded a true ninety degree hairpin bend, up hill, and the road became a track!
It was so narrow and rough that for a moment we thought that we'd turned off the road and were going to end up in a farm yard. The views changed from spectacular to gobsmacking - absolutely incredible. Our little car (and driver) performed very, very well as we edged our way down to the western tip of Lake Vrnwy. 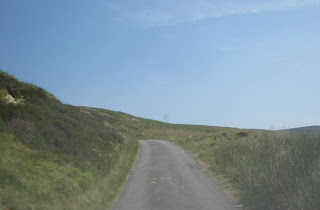 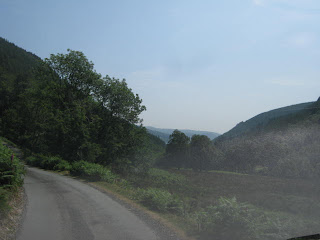 We shared the road with a few sheep, (a couple of which were so happy basking on the side of the track that they refused to move and we had to drive around them.
There were 2 cyclists at the top of the pass, catching their breath before the descent and we met 3 cars going the other way, each time we were at a 'passing place', there were no cars in front or behind us.
It was a really amazing drive, similar to a track that we once took in Devon when we were looking for a Bronze Age Village Site. Similar to the road across the Gap of Dunloe in Ireland. The Dunloe road is a gazetted road but has signs up 'not recommended for vehicles'. When we were there some years ago we saw the local postman come through from the opposite direction and thought we'd give it a shot too. The road is used by locals who do a roaring trade in horse rides through the Gap, and they were not very pleased about us driving past. On both of those previous tracks we had been in a 2 CV - this was a first in a car with air conditioning. 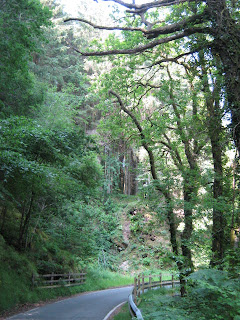 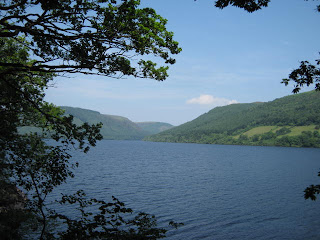 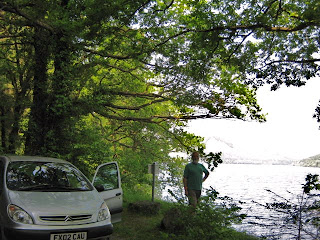 We followed the road down the side Lake Vrnwy (a reservoir, made in 1964 by flooding a small lake, the valley and a village) to the village of Llanwddyn (9 letters, 1 vowel). Here we stopped to have lunch, those cyclists from the top of the pass rode in as we were having lunch. After lunch we took a walk along the dam wall, before heading off on more side roads, not tracks, across country to the town of Welshpool. (about 16 miles west of Shrewsbury). 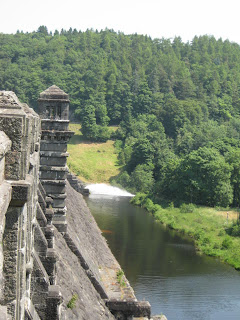 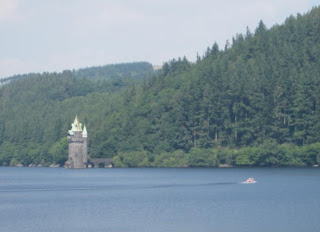 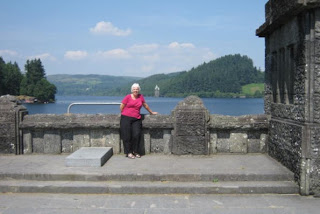 After driving around the one way system, twice, we found the car park entry and called into the Tourist Centre for info on B & Bs. It cost 2 pounds for them to make a phone call and book us in. Initially the price was just above our limit but as it was 2pm, the price dropped 5pounds and we took it.
Before heading out to the B & B we found the laundrette in town and put through a load. The clothes were still a little damp when I took them out of the dryer but it was too hot to hang around anymore, we had outstayed our parking limit and we needed to rest so I folded the clothes and we set off.
The B & B selected was in the quiet village of Guilsfield about 4 miles out of Welshpool. the landlady was out until 4pm and we were a little early so we found a shady spot and sat in the car to wait.
The  (4 star) B & B was 'Red House Cottage' and was a separate cottage to the main house, initially a small barn it had been converted for the previous owners' mother and the present owner had only been operating as a B & B for a year or so. The cottage had 2, tastefully decorated bedrooms, with exposed beams, a lovely breakfast room and beautiful, cool, comfortable sitting room.  Fortunately there were plenty of coat hangers provided and the bedroom soon looked like a laundry, but it the heat, with a fan on, they soon dried. 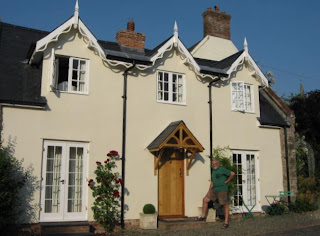 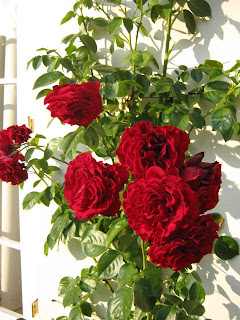 In the evening we walked up the lane to the Kings Head pub for dinner. We arrived just in time to take a 'meal-deal' (2 courses for 9.95 pounds) The food was very, very good - how can some little places get it so right and yet others are awful. Why do people put up with Brewers Fayre (sticky carpets, sticky, food splattered menus, sloppy service and bland food)?
It shouldn't really have come as a surprise when I heard yesterday that Jamie Oliver's plans to provide better school meals for kids has failed - mothers and fathers were going to the schools and passing packets of crisps, chips, chocolates and other junk food through the railings to their kids.
We're just grateful for these quality pubs.

That night we had a lovely uninterrupted sleep - no noise. No trains, no trucks, no people, no alarms.

After a late breakfast (9.00am) we drove back into Welshpool and taking our favourite B roads went back into Shropshire - England. We stopped in Bishops Castle and gave our legs a good stretch as the main street in a steep one. Not as steep as Lincoln's Steep Hill, but still a climb. We rested halfway up for coffee at a sweet little tea room (can't call it tea rooms, as it was so tiny), and enjoyed a chat with the proprietoress. 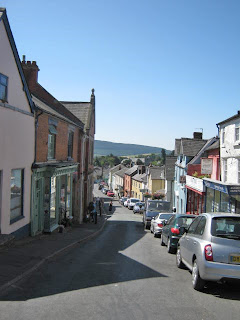 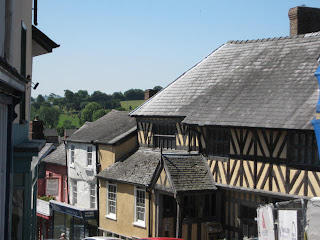 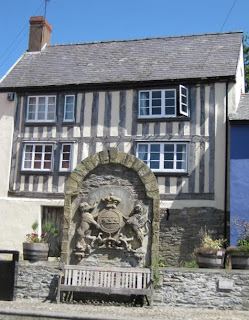 Then we drove through Clun and Craven Arms before heading north and the town of Church Stretton.
This nice little town is on the edge of 'Long Mynd' hill range. We walked around town, applying the Aussie lifestyle rule of crossing the street to walk in the shade - it was hot.
Finally UK is having a summer heatwave. 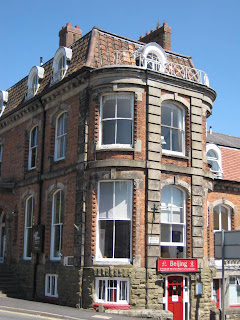 The previous evening I had gone on line and searched for a B & B (as everyone had kept telling us to do!). I had enquired about a Farmstay B & B but had not had a reply so we once again called at the Tourist Office. The nice lady recommended a B & B just out of town (on the outskirts of the village of Leebotwood). The 'Little Dingle' B & B was quite new, so was not yet relying on repeat business - but all the reports given back to the Tourist centre has been very positive. It was in the price range so we took it. Before going out there we stopped at a supermarket to buy some salad and meat for dinner at night so that once settled in we could stay in.
Our hosts Beryl and Tony Smith were delightful, and the room (or rather, rooms)  were top quality - 4 star again. 12 months ago their B & B accommodation was their 2 car garage, but they've got a little lean to for the cars now and this exquisite 2 unit, guest accommodation. Each unit has an ensuite, it's own sitting room (with sofa bed, table and tv) aswell as a large bedroom with plenty of space, and another tv. One unit has twin beds, we took the double. Although it's on the main Shrewsbury to Hereford road, it is set back from the road and with double glazing it really quiet. From the bedroom window there is a view across the road to the local mountain - Caer Caradoc. 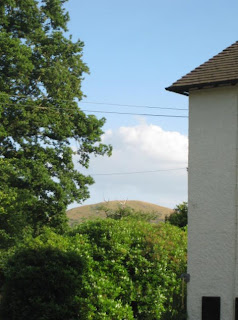 I had thought of a Farm B & B for something different and a nice peaceful relaxing time away from city traffic but these last two B & Bs have shown that that's not necessary; they have been very relaxing and peaceful. Hopefully by deciding to not go out to the coast we can have 4 star quality without breaking our budget.

We decided to travel through the middle of Wales partly to visit places that we'd not been to before, to travel through Snowdonia and the Brecon Beacons but also because it was now school holidays, the weather was good and lots of people were heading to the coast. Apparently lots of people who often take last minute breaks abroad (cheap deals in Sicily, Spain, Turkey etc) are taking their breaks at UK/ Welsh seaside towns. Good for the local economy, let's home the heatwave lasts!
Our plans - such as they are because we're drifting around the countryside, are to slowly travel south through the smaller towns and villages to a little place called Talgarth on the edge of the Brecon Beacons National Park and then take the B4560 south to Ebbw Vale (Glynebury). This road is one of National Geographic Magazine's top ten drives in the world, alongside routes in Alaska, Arizona and Atlas Mountains. I wonder if they've ever driven from Dinas-Mawddwy to Llanwddyn.

Posted by Big trip almost around AUS at 08:46