Next morning was a little milder, it was still windy but not actually raining so I was able to take a photo from the room window. 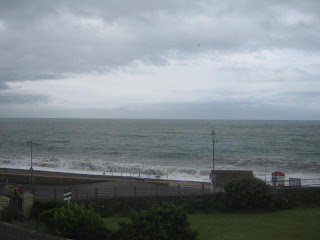 We enjoyed a lovely 'full English Breakfast' and then drove through town to the town to the Seaton Tramway.There was no car park at the Tram 'station' we had to pay and park at the town car park (parking is a contentious issue in Seaton, local businesses are against it as trade has suffered but the current council persists in it's belief that it's a good thing). 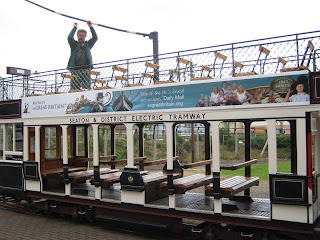 We got the tram out to Colyton via Colyford, travelling along the side of the river Axe, through farms and marshlands.

We travelled inside the carriage on the journey out to Colyton, passing through Colyford which is notable for it's T E Lawrence (Lawrence of Arabia) connection - Lawrence used to buy fuel for his motorbike at the local garage. There is a fine Victorian  iron and concrete mens toilet on the station platform, no longer in use but not yet decrepit. 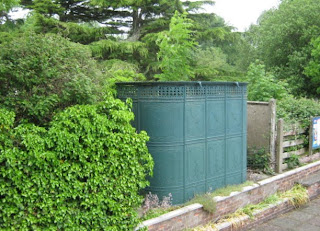 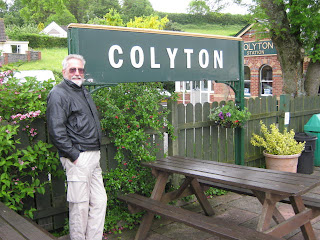 At Colyton we disembarked and perused the merchandise (no purchases) before re-boarding the tram. For the return trip we braved the elements and rode upstairs!! 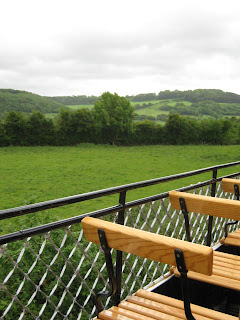 There was lots of birdlife on the river and marshlands, egrets, ducks and ducklings, seagulls and lots of pheasants including one who almost got run over so reluctant was he to leave the track. There were lots of rabbits around too - Michael wished he had a gun! The trams ran every 20mins so we passed others on the track. 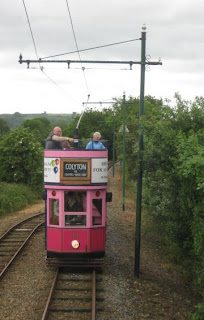 If you think the trams look small - you're right, they are actually 1/2 (half) scale.
The Tramway is one gigantic model railway, one man's vision and probably Seaton's greatest claim to fame.
The council, of course, vigorously opposed it. 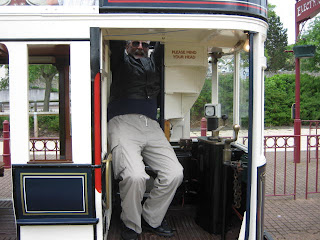 Back in Seaton we extricated ourselves from the upper deck and then got the car and drove along the coast to the village of Beer. Another lovely Devon coastal village with steep narrow streets and lovely cliff views. We then continued west towards Sidmouth stopping off at the Donkey Sanctuary. 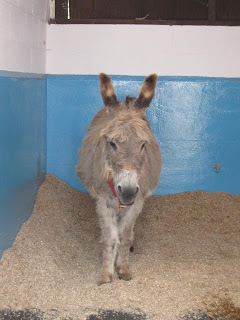 The Sanctuary was started in 1969 by Elisabeth Svendsen with 38 donkeys, in 1973 it was registered as a charity and it was in that year that they were bequeathed 204 donkeys. To date over 14,500 donkeys have passed through the sanctuary's various farms. It has grown into an international enterprise with sanctuaries in many other countries including Ireland, Egypt, Kenya, Mexico and India. 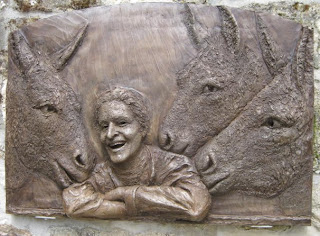 Entry and parking are free! Naturally we made a generous donation and bought some merchandise. 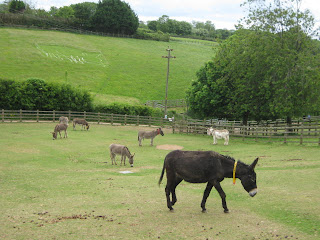 We had lunch is the very nice Hayloft restaurant and were amazed at the English attitude to dogs (an anagram of the word gods). Dogs were welcome at the sanctuary, on a lead, but their welcome inside the restaurant shocked us. 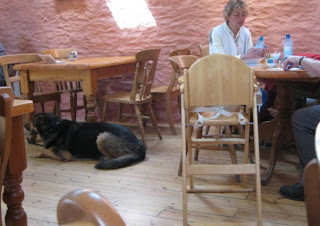 After the shock and the lunch we walked to the outer paddocks and the Poitou donkeys. Poitou are French donkeys used to breed mules but the advent of motorised commercial transport saw their decline and Poitou were placed on the 'endangered' list. This has now changed and Poitou are safe, the Sanctuary has successfully bred Poitou. They are really beautiful, big creatures. (We miss our donkeys!) 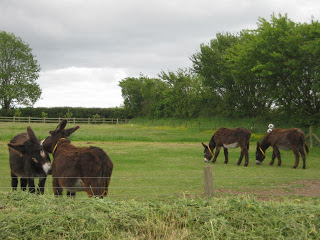 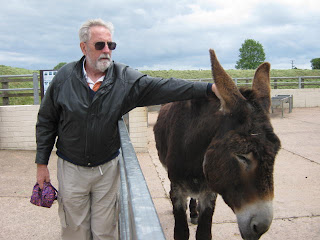 We reluctantly took our leave of the Sanctuary and carried on westwards into Sidmouth.
We took the easiest option to find a B & B - went to the information centre and asked them to find one that fitted our criteria, (free parking, ensuite and available for 2 nights). This service is free, you just pay the information 10% of the total bill. We then paid for 30 minutes parking and took a stroll along Sidmouth Esplanade. It was what you might call - bracing! 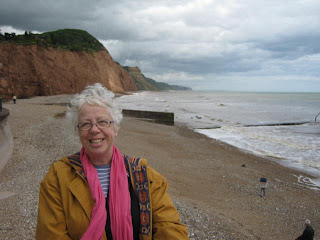 We were pleased to see that we were not the only ones rugged up for the UK summer. 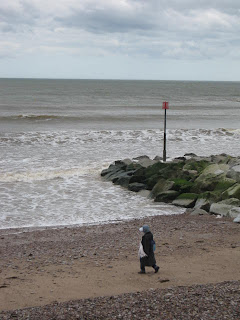 Then we drove out to the B & B where we were welcomed with a pot of tea and a chat by our hosts Stan and Julian. On their recommendation we ate at the Swan Inn that evening. Great food and huge portions; we took another stroll along the Esplanade and wandered back via some lovely streets. We were delighted to find a 'ford' in the town and Michael was itching to get in the car and drive through himself. (another day). 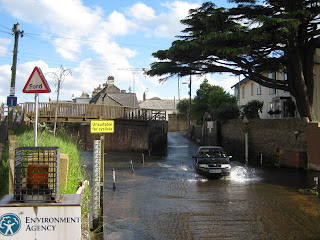 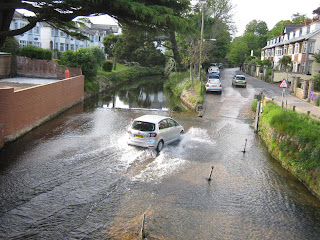 We had time to wander and window shop as there were few people around and even fewer cars.
In UK at the moment one of the most popular tv programmes is "Springwatch". It features hidden cameras in a bird sanctuary showing birds' nests and the progress of birds nesting and the eggs hatching. The current shows show the chicks 'fledging. As we walked through the Sidmouth streets the noise of the seagulls was really loud, we looked up and spotted a pair of gulls attending their nest on the roof of Lloyds Bank, then we saw 4 little heads appear. Our very own Springwatch - then one of the chicks walked up the tiles of the roof, gettting ready to 'fledge'. Who would have thought that you could make a popular peak time tv programme about birds - it's more popular than Coronation Street (Neighbours)? It really has placed nature back on people's agenda, what a change from the UK of our last visit.

After another good night's sleep we headed off after breakfast, a few miles further west to 'West Point Arena' just outside Exeter and the 'Camping and Motorhome Show', but that's the next blog.