So we were off to a UK camping show. We were on the road by 9 am and followed the extremely clear and well posted signs to the show ground. We parked in the first line of cars, near the gate and were buying our tickets at 9.31 (the show opened at 9.30).The first vans that we saw gave us a bit of a shock, 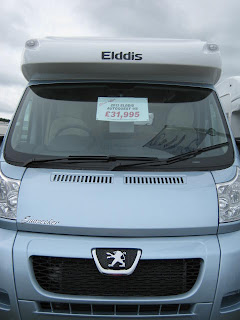 'How much is it?'
Then we realised that all the vans were second hand. Turns out that these shows are where the dealers showcase their stock, no the manufacturers, they have a bigger national show later in the year.

We enjoyed looking into these English vans, with their carpets, large windows and roof vents, ovens and the
lack of an electric hot plate - only 3 gas rigs. 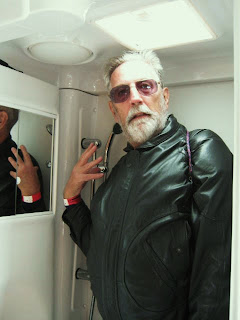 But the shower areas, bathrooms really, were much better than most Aussie vans. We spoke to a couple of dealers who suggested that we buy one to bring back to Aus. telling us that people do it all the time - must look into that, thought Customs had too many restrictions. 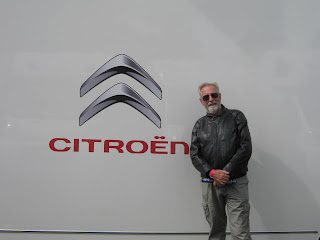 After the complete packages we wandered around the stalls, there were some items not seen in Aus and some of the 'usual' ones. The prices varied from 'you must be joking' to 'Are you sure?'. Some things were only a few dollars cheaper so not worth the excess baggage to bring home but we did get a few little items.
This show was the 'Motor home and camping show' so there were no caravans or tents on show but it was still a big affair, probably about half the size of the Perth Caravan and camping show which does include caravans and tents. 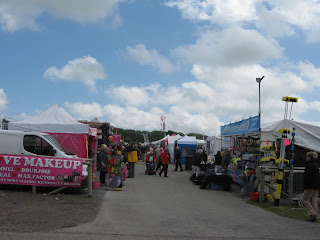 We had lunch at the show and then went back to Sidmouth. After a cuppa on our balcony at the B & B, Michael had a rest after a full morning's walking (and shopping) so I walked into Sidmouth and spent a little money on a few souvenirs. 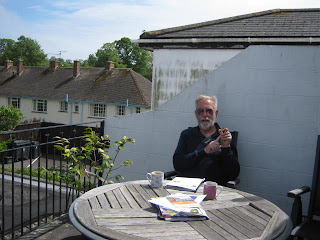 For dinner we had rolls and yoghurt from the supermarket and I washed it down with a nice Californian Sauvignon Blanc.
Then we packed up ready to leave straight after breakfast the next morning.
As we went down to breakfast I had a feeling that I'd forgotten something and as we left the room to go to the car Michael asked me if I was sure that I had everything - well 2 days later I discovered what it was that I had indeed left behind - the adaptor for the power plug on the computer - I'd unplugged the plug on its own, so now long computer sessions, just email checks until we source another.

Posted by Big trip almost around AUS at 06:35