Our second day in Berlin and we decided to forego breakfast at the hotel (not included in the room price and charged at 13 Euro each), and we walked around the corner to 'our' cafe from last night, the 'Cafe and more' on Gr Hamburger Strasse. We had some of that great coffee and a couple of savoury pastries. The total cost was less than 8 Euro. The coffee is really good so I think this is going to be our breakfast venue.
After the awful weather in UK the sunshine and forecast 29 degrees in Berlin was really welcome, tomorrow the forecast is for 35 degrees! That may be a little too hot in the city.
We started our walking exploration of Berlin, we crossed the River Spree onto Museum Island, walking between the awesome buildings. There are still reminders of the past here, with the pillars and walls showing bullet damage. 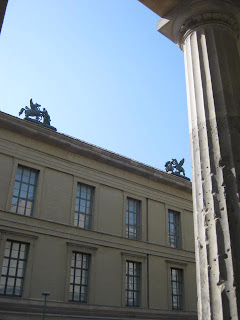 We left the Museum Island crossing a little bridge with lots of padlocks attached to the wrought iron work - each padlock has the names of couples written on, some are engraved. Symbolising that they are locked together in love? 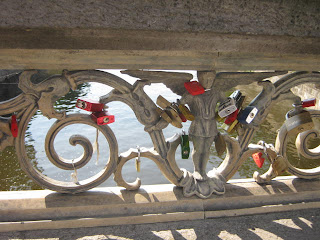 There is always new building work going on in Berlin and the Unter den Linden is currently having work done. We walked along through the central strip of the street for a short distance, near the statue of Frederick the Great, until the construction work forced us onto the pavement. 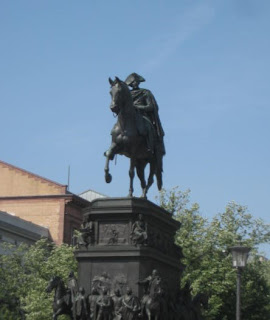 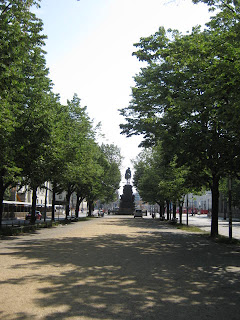 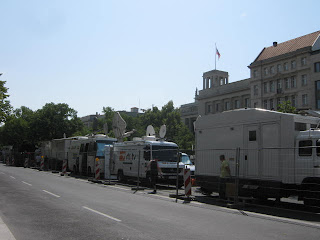 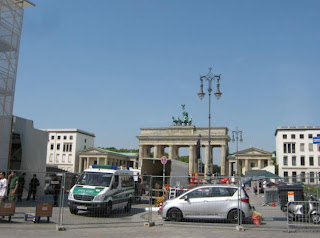 There were lots (and lots) of television and media vans, satellite dishes and media personnel around and as we neared the Brandenburg Gate the security forces grew in number. I thought that perhaps Michael had overdone the preparations for my birthday but it seems that The President of the United States, Barack Obama is joining us here in Berlin. We hope he enjoys it here as much as we do.

We walked under the Brandenburg Gate, with that glorious statue on top, and stood looking down that lovely boulevard towards the Triumphal Column. 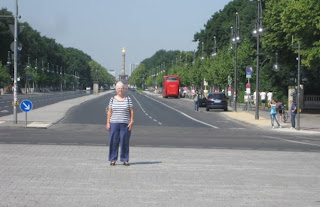 This is Strasse de 17 de Juin (17th June Street).
(Named after an industrial protest on that day in 1953 resulted in the deaths of 25 protestors.) 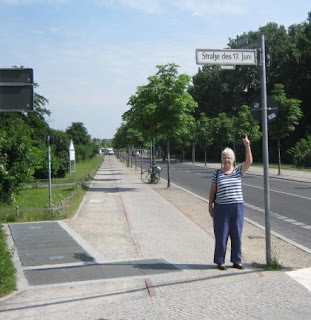 This is my street - named for the day I was born.

Then we strolled along the edge of the Tiergarten , the largest park in Berlin, before turning off to sit in the shade for a while before continuing on to the Reichstag.
This is a really amazing building - a potent symbol to the German people.  It dominates the air. It has, like most of Berlin, a troubled and varied history. It was intended as a symbol of national unity and to showcase the aspirations of the new German Empire in 1871. It was partially destroyed by the Nazis in 1933 to advance their cause and rise to power. Rebuilding took place between 1957 and 1972 when it was often used as a spectacular backdrop for festivals and concerts. (to the annoyance of the East German authorities). On 2 December 1990 the Reichstag was the first meeting place of the newly elected Bundestag following reunification.  Now I think it is back to that original intended symbolism. 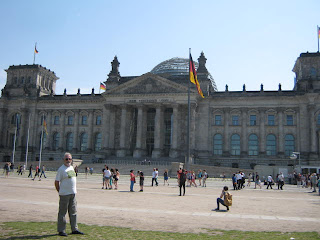 We grabbed some snacks and cold drinks and went back to the hotel for a siesta. Later in the afternoon we were off walking again, a little bit of retail therapy. Michael got a couple of T shirts and I got a couple of bags. One of the travel bags we'd arrived with had fallen apart so that needed to be replaced and I spoilt myself with a really cool new handbag.
We walked past an hotel which had the Aussie flag flying and by their front door was this great Australian Aboriginal art work 'Berlin Bear' (the city's symbol). 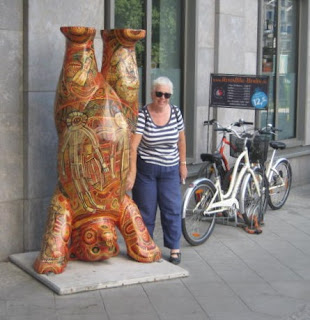 Then we spotted another bear - there are a lot around. 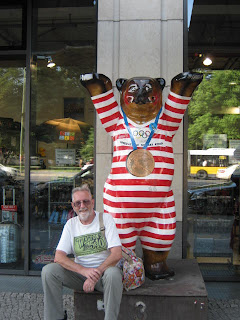 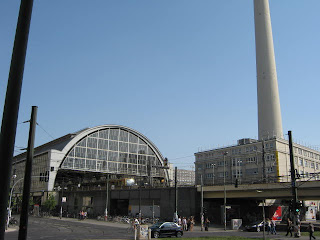 We walked around Alexander Platz and well very pleased that we were in the hotel we are in, a couple of options had been hotels around Alexander Platz - ours in better, and that coffee shop does do really good coffee!
We walked on and did a loop around the streets near the hotel, coming back past the old Postfuhraut which was originally used as stables for the horses that delivered the post. It's more like a palace than a post office. 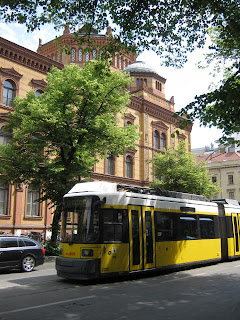 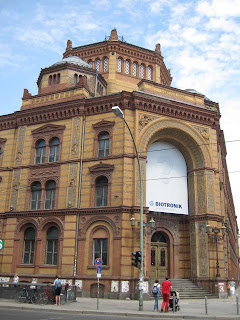 Then being back in the old Jewish district we walked past the recently restored Neue Synagogue.The original was partially destroyed during 'Kristallnacht' and further damaged by bombing, it was finally demolished in 1958. Reconstruction commenced in 1988 and was completed in 1995. 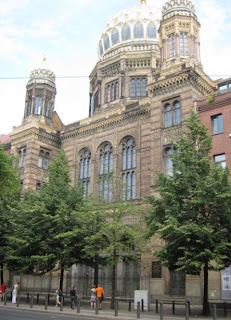 Then we walked alongside Monbijou park, a very popular spot for families. It is almost directly opposite our hotel, and runs down to the river with the museums on the island on the other side. These girls were decorating a tree in the park, obviously having a party later on - the dome in the background is the Bodemuseum. 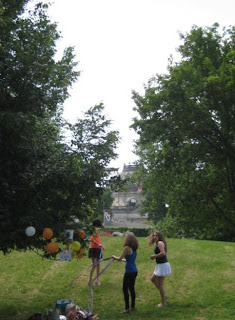 Hot and weary we had pizza for dinner.

Next morning we headed the calls of our feet and knees and decided to travel by transport not 'Shanks' pony'.We took a tram from the closest stop to the end of the line - Falkenburg - where ever that is. We travelled through some of the old Eastern suburbs with lots and lots of huge high rise apartment blocks. At the terminus we caught another tram to somewhere else - Schoneweid- here we got the train back around to the Western side of the city where we changed trains to get back to Hackescher Mkt and the hotel.
After lunch we both had a nice long siesta before heading out into the still hot evening and got pizza again.
We  finished off the evening with an extra large coffee at our favourite little cafe.

Posted by Big trip almost around AUS at 12:49