First of all apologies for the couple of spelling mistakes in the last blog - we are now in Berlin and only half of the instructions have been translated and instead of saving the blog I actually posted it - hope I've got the hang of it now.

Just a little back track to our journey from Devon to St Albans. We travelled through some lovely towns and villages including the seaside town of Lyme Regis and saw some really amazing thatched cottages. We were surprised to see them right on the coast.  We skirted Dorchester and stopped in Blandford Forum to make enquiries about the Great Dorset Steam Fair later in the year. The ladies were unable to do anything more than give me a few leaflets. Michael had to spend a penny but ended up spending twenty pence, the public toilets next to the information office were council owned and cost 20p a go - IF you could go that is, the door wouldn't open. Poor Michael drove the next few miles in discomfort as we'd had enough of Blandford Forum and drove away.
In the village of Nether Wallop (one of several Wallops) we stopped for fuel (and toilet). The lady there suggested that I buy a lottery ticket as the fuel we got from pump 4 came to 44 pounds, 44 pence. Maybe I should have, maybe it was my lucky day because on the way back to the car I found a 5 pence coin!
We decided to use motorways for the last half of the trip rather than cross country through Reading, Windsor and other Thames Valley towns on a Saturday at lunch time. The M3 was fast and free flowing until near the junction with M25 when it all ground to a standstill. Once we'd turned onto M25 northbound we found that the problem was in fact with the south bound traffic - why we'd had the hold up we don't know, maybe people changing lanes? We have never had any real hold ups on M25 and really like the 'variable speed' signs slowing cars down if there is congestion. It keeps everyone moving rather than a few trying to drive at full speed and then braking and causing stop start traffic. 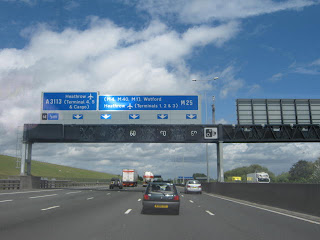 You will have gathered that we managed to buy another adaptor in St Albans, in fact we got two universal ones for visitors to the UK, and we realised that we'd need one in Germany so got one to convert the converted UK plug to a European one. Having lost one I'm hoping that I won't do it again.

Jim drove us to Luton airport and we thought parking costs were high in Perth - at Luton Airport it costs you 2 pounds to drop someone off in the 15 minute zone, and there's a tow truck parked there waiting for anyone who takes a chance!
As we'd booked online we had our boarding passes and only had carry on bags so we didn't encounter any of those people you've seen on the tv programme "Airline" - the ones who argue over luggage costs and weight, who didn't realise that you need a passport to fly, or have lost their tickets. There was the now standard long queue for security clearance but it cheered us up to see on the table of rejected items, among the large water and juice bottles there was a toy gun.What sort of person...........
It was a real nostalgia trip to walk out onto the tarmac and climb the steps into the plane. A smooth, short flight later and we were approaching Berlin. We don't know what our flight path was but we flew over some flooded villages and farms. We thought that it was only the south of the country that had been affected.

As we'd flown on my birthday we went mad and got a taxi to the hotel in central Berlin. The trip took about an hour and hotel check-in took about 5 minutes so we were soon up in our room looking out at the sights. 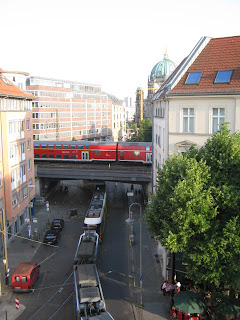 Our hotel is the monbijou hotel, near Museum Island, walking distance to many attractions.
We'd chosen it online and we are really pleased. It was only opened last year and although the room is quite small it's really clean, quiet and the beds are great.(I've never known such soft pillows). I thought that we had a basic standard 'comfort economy' room with a shower over a bath but maybe we got an upgrade because we had a large full shower (we did have a choice of rooms at check-in, and chose one on 4th floor at the front).
Dinner the first night was in a side street behind the hotel, in what turned out to be the old Jewish district of Eastern Berlin. We each had a beef noodle salad and then at a tiny cafe had a really great coffee and huge danish pastry (between us).To walk off the pastry we strolled around the district finding the Old Jewish Cemetery which was established in 1672 and was declared full in 1827, the cemetery was destroyed by the Nazis with all the graves being systematically removed. Nearby is the Memorial to the thousands of Berlin Jews condemned to death in the camps at Auschwitz and Theresienstadt. 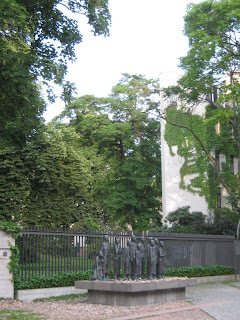 Nearby is a Jewish school which was founded in 1778,
and we paused outside the Sophienkirche (founded in 1712). 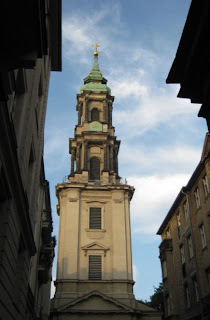 So much history surrounds these streets and walking along one cobbled street we noticed small plaques replacing some of the cobble stones outside some houses. These remembered those who lived there and were "deported and murdered:" in Auschwitz and Theresienstadt. All of them a sobering reminder of Berlin's past, but one which they have recognised and not forgotten.

Posted by Big trip almost around AUS at 12:15