Messing about in a boat on the Thames

Day two, the first day of summer and the sun is shining!
We all went to Windsor and decided to take a 40 minute cruise along the River Thames. We sat upstairs on the open deck and cruised down river passed luxury cruisers, narrow boats, paddle boats and lots of birdlife. 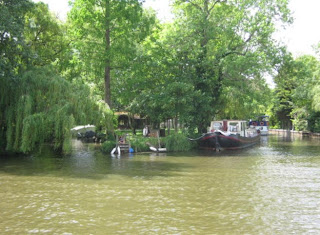 We could see the spires of Eton college and passed the place on the river where the boys used to swim before the  school got a swimming pool.The view from the boat is probably the very best view of the castle. The Royal Standard flying indicating that Her Majesty is at home. 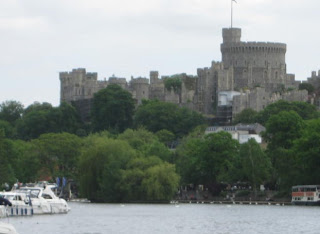 After docking we headed up into the town of Windsor grabbing a sandwich at a cafe in the bustling Windsor Royal Shopping centre. We then walked further up the town around the castle walls - a very large crowd was blocking the footpath and there was congestion on the roadway. The reason - some nob had parked his Bugatti Veyron in the street (in a loading bay!). This gave Michael the opportunity to channel Jeremy Clarkson and several other people were heard to comment on the fact that there was a bigger crowd photographing a car than photographing the castle. If you can zoom the photo you will see that the number plate is from Saudi Arabia so parking fines are obviously non applicable. 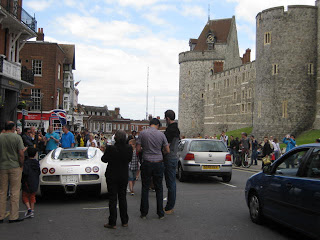 None of us were interested in doing a tour of the castle (just as well when we saw the queue) so we just walked around enjoying the beautiful old buildings and ambience. 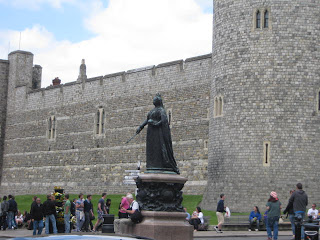 We then left Windsor, walking across the bridge over the Thames and entered Eton. A stunning little town, with a very different vibe to Windsor. Eton is very much quieter and has more antique shops as well as the marvellous school (college). 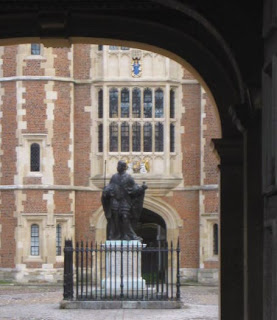 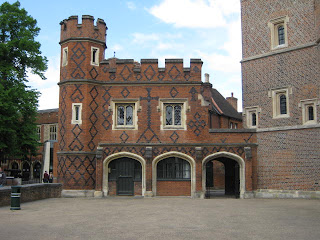 Tomorrow June 2nd marks the 60th Annniversary of the Queen's  reign and the main street in Eton was preparing it's celebrations, Union Jack bunting in full splendour. 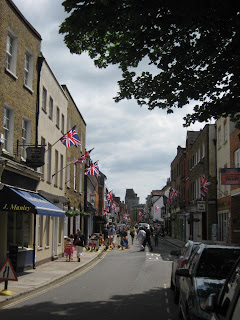 We were all feeling a little tired by now so we headed back to the car (Pauline was with us and she knew exactly where the car was). We had another great tour on the way home, following the Thames along through some gorgeous villages with really beautiful, really old  houses. We went through Marlow and Henley, names that conjure up memories from childhood books and adventures of 'Messing about on the river' as well, of course, the racing regattas.
We had a nice relaxing evening  watching telly and tomorrow we're heading North, to Shrewsbury, where John and I grew up. We'll stay overnight and see how much the town has changed in 50 years!!