The English countryside is so pretty, especially at the beginning of summer - the Hawthorn / May flower is in full blossom and the hedgerows are a mass of colour, but travelling any great distance through the country using anything other than the motorway system involves a long, slow, tiring, hard drive. So we used the motorways to travel from Reading up to the Midlands and onto Shrewsbury (pronounced 'Shrozebury').
Shrewsbury is where my mother was born, where John and I grew up and where I went to school. Charles Darwin was also born there.
This modern sculpture that Pauline is standing under is supposed to represent Darwin's work and the ecology of evolution.  Can't see all that but it is nice anyway. 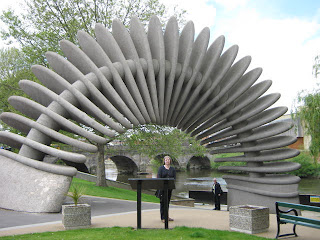 As the traffic has increased the road system has changed but the town itself is still pretty much the same, with its' wonderful medieval history, Tudor black and white buildings, and fantastic streets and 'shuts' (narrow lanes) with names like: Dogpole, Mardol, Gullet passage, Pig Trough, Pride Hill and Wyle Cop.

The town park is the Quarry, down by the river, and in the middle of this large splendid green parkland is a sunken garden, The Dingle. 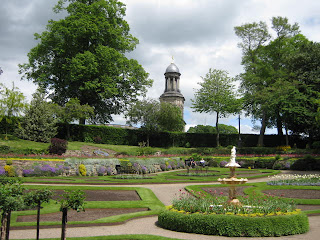 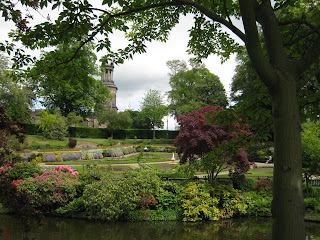 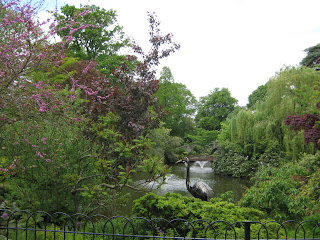 The Dingle was a popular spot for my parents to sit and contemplate their future when they were 'courting'. The paths through the gardens still have lots of couples, young and old, enjoying the flowers and the sunshine. We remembered Mum and Dad as we wandered along the paths and enjoyed the sights and smells of the shrubs and flowers.
As we left the Dingle to wander further around the Quarry a Brass Band started up in the bandstand - glorious. The music could be heard all around the park and out onto the nearby streets. 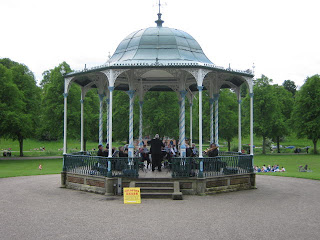 We walked up the main pathway past the War Memorial and out of the main gate to St Chad's church. (Memories of Founders Day services at school.) St Chads, built in 1790 is famous for being circular rather than built in the shape of a cross. (It seemed smaller than I remember, when we schoolgirls were all packed in to the pews, but it is still a glorious church.)

Later in the afternoon I surprised myself by taking Michael, John and Pauline on a little tour around some of the town, including the house my mother was born in. I have obviously taken in more information than I thought  from when Mum used to take me to places and tell me some of the history of the place and some personal anecdotes. 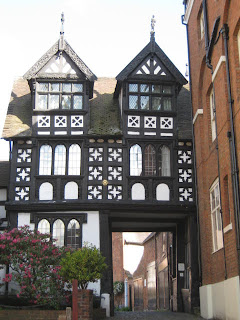 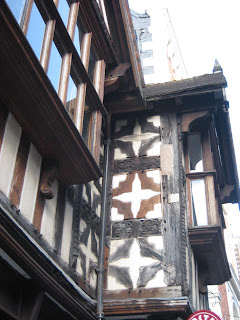 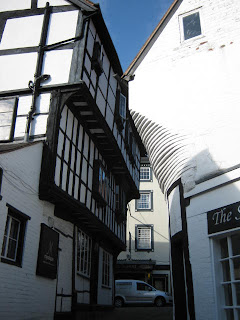 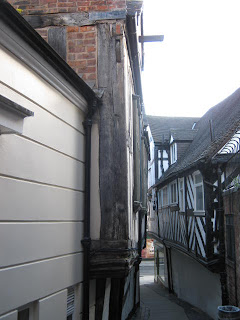 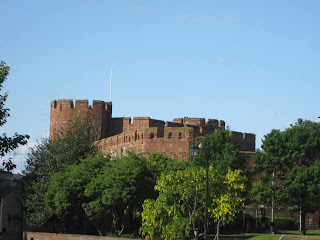 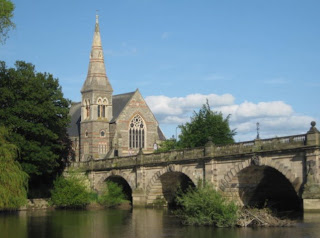 We had a good meal at the hotel in the evening, as we were all pretty much walked out (and probably wouldn't have been able to decide on a curry, pizza, pub or steak house.)
We arranged to meet John and Pauline at breakfast around 8.30 the next morning but we slept so well that we didn't wake up until 9.00am. (Can recommend the beds in Premier Inns).

After a nice "Full English" (breakfast) we drove about 10miles out of Shrewsbury to the Roman ruins of Viriconium, near Wroxeter.
Viriconium was built in AD58 and was once a large Roman base of around 4000 people. It gradually fell into disrepair and over the next few hundred years it ceased to be a settlement of any description. The town of Wroxeter is a few miles down the road.
What is left though is spectacular - the tallest surviving Roman wall. It rises 20 feet above the site and is awesome. 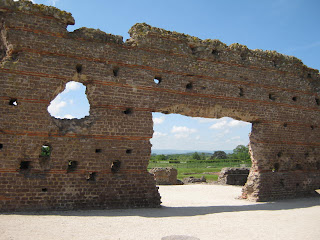 There is a reconstruction of a Roman villa too. (Apparently this was built as a project for modern day builders to construct it exactly as the Romans would have and the whole thing was serialised on tv.) 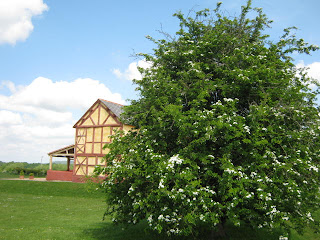 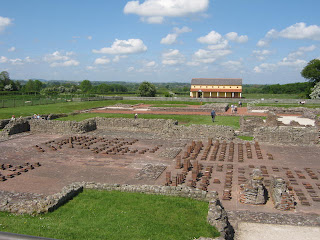 The audio tour of the site is very good, one of those that allows you to tour at your own pace.(just press a button when ready for the next bit of information). 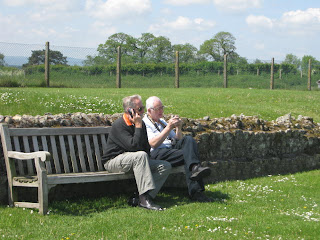 I'm ashamed to admit that this was my first visit to Viriconium, although I have seen lots of artefacts from the site in the museum in Shrewsbury. We all really enjoyed our morning there.
Leaving the site we went back to the motorway, heading south through Telford, Birmingham and onto St Albans. Where we will be spending time with Michael's brother Jim and his wife Joy.
We made great time, arriving at their house mid afternoon to find an empty house! They drove into their driveway 5 minutes later.
After afternoon tea John and Pauline headed back across country to Reading and we set up camp in Jim's spare room.

First job here in St Albans is to buy a car! The local trade papers have all been replaced by online searches so we scrolled through thousands of ads - then narrowed it down considerably and checked out Citroens (of course!).

You can't be in England without being obsessed with the weather - and the gods are smiling on us. Summer officially began on June 1st - the sun came out on June 1st.
Everyday since then has been glorious, the jumpers are still in the suitcase. The forecast for the weekend is a max of 23! I'm going to have to put sunscreen on the shopping list tomorrow.
(The forecasters no long give 'long range forecasts' - they've got it so terribly wrong in the past. Long range now covers only the next 4 days.)