Well, as the saying goes - Mad dogs and Englishmen etc.... obviously applies to anyone because we traipsed off this morning to take a cruise on the Spree, the River Spree that is. We had thought of taking a cruise yesterday but they weren't running because of the city's security clamp down. So there we were sitting in the sun, (it's an unwritten law that you have to sit outside, on the top deck if there is one) ready to enjoy the 10.45am cruise. We sat inside until we were ready to leave dock, it really was very hot up there in the sun.
The hour long cruise took us past some of the city's great landmarks with the signs of building construction always visible and sometimes impossible to avoid in the photos - perhaps I should photoshop out the cranes? 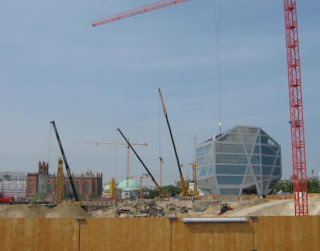 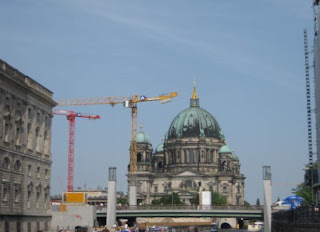 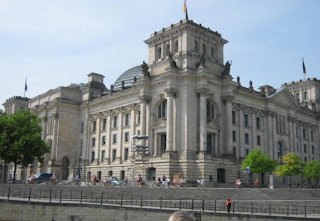 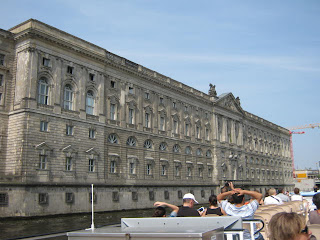 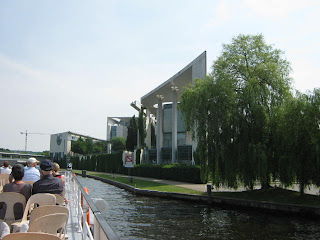 We went under plenty of bridges, one was so low that the cruise commentary included Achtung! Warning, low bridge. 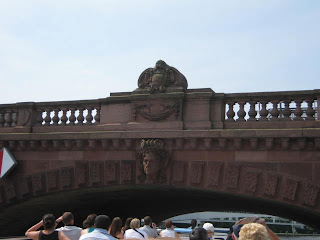 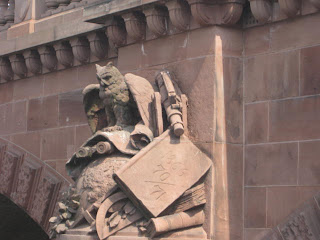 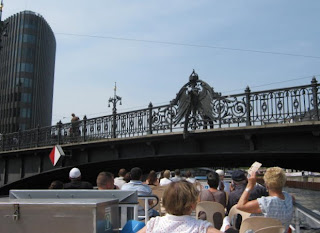 We went past Monbijou Park opposite our hotel, but couldn't quite see our room from the boat.
Even from the boat there were signs of Berlin's recent past,
with the line of pale bricks showing the site of the Berlin Wall. 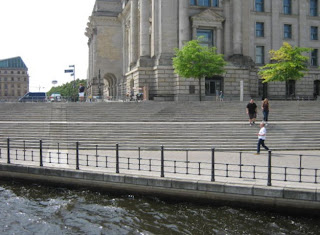 This wall at the back of the Bode Museum bears many scars. 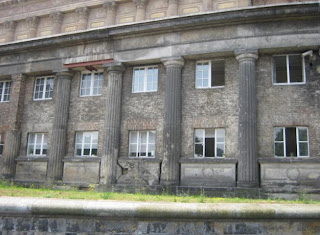 The cruise lasted an hour and we had had enough heat and sun so we walked just one street and got on a local bus. Route 100 runs from Alexander Platz to the Zoo Bahnof and follows the route of the tourist 'Around Berlin" bus running along Unter den Linden, past the Brandenburg Gate, along the Tiergarten and the river, giving us a different view of those classic sites. 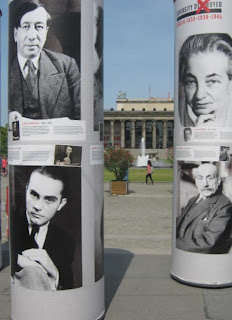 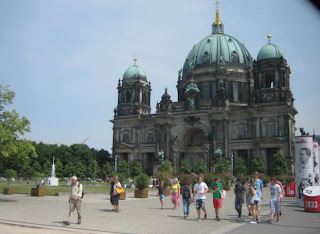 Including the not seen before front of the Bellevue Schloss. 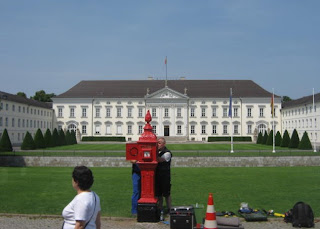 We go off the bus at the Zoo terminus and decided to have a real Berlin lunch - Curry Wurst. 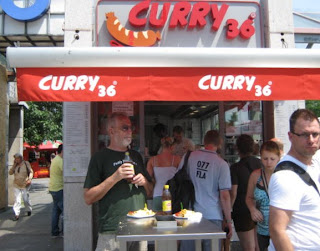 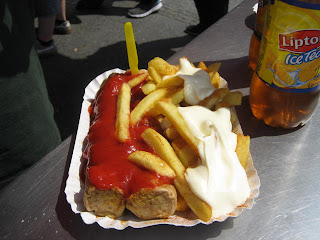 Then we got another bus back to Alexander Platz and went to the Berliner DDR Motorradmuseum.
This museum is under the arches at the station, a nice location. It 'showcases the history of the East German motorbike production'. There are more than 140 motorbikes, motor scooters and mopeds on display. All of them looked so old fashioned and Michael was picking out which ones were copies of what 'western' bikes.
They were in very, very good, well restored condition and were well displayed but the museum charged to take photos - hence I didn't take any! This van, a Barkas, was parked out the front.(In the public area). 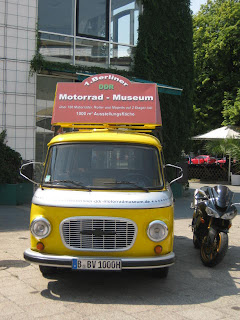 Then we headed back for a welcome siesta, time to 'blog' and then dinner and coffee at our cafe. Tomorrow we'll have a last breakfast there before getting the train down to Wannsee and meeting up with our friends Gary and Petra, staying with them near Potsdam for 4 days. Those days will be the next blog.

Posted by Big trip almost around AUS at 09:30