Friday night and we're out for dinner - unfortunately we were down on our numbers due to sickness and work commitments, but these things happen.
Imelda was feeling better and was able to join us although she did not eat any of the fabulous offerings.
The menu left each of us slightly bemused after first reading. It was full of weird and wonderful descriptions. For example the soup was not just Cauliflower Soup - it was 'Roasted Cauliflower with a touch of Cashel Blue cheese and soft ripe Wexford pear'. (Jim had it and said it was delicious).
After a second and third reading we were all happy to order and what followed delighted us all. The food was really, really good and although at first glance may have appeared not enough to fill an empty stomach we all came away satisfied. 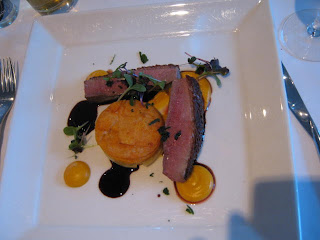 
A few days earlier I had been talking to someone saying that you just don't see Baked Alaska on menus any more, it has gone out of fashion. Well, it was on this menu and was lovely! It was baked as individual baked alaskas with chocolate ice cream in the meringue and served with strawberries. Yum!
The Stone House restaurant in Thomas Street, Clonmel gets our thumbs up.

The next day we checked out of the hotel in town and moved out to stay with Michael and Anne on the farm again. That evening we went down the road to Tina and Declan's for a bigger get together.
Tina and Declan had bought a big marquee earlier in the year and this was its first 'outing'. What a great venue, it kept everyone out of the wind (we were lucky in that the rain held off). It was perfect for the 60 guests to sit and eat. Later in the evening the outdoor gas heater was lit and it was quite snug in there. 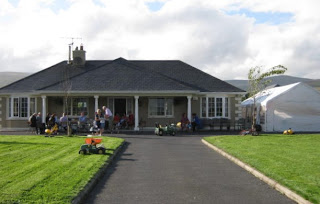 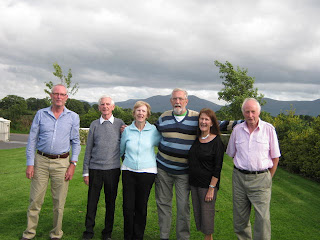 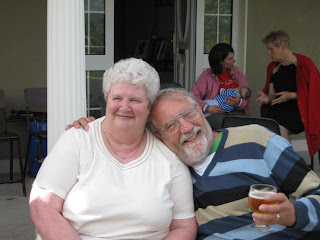 The family get together incorporated a belated 40th Wedding Anniversary party for Michael and Anne, so was a lovely mix of family and friends. There were more Coca Cola cans than beer cans drunk, although as Clonmel is home to Bulmers Cider there were a few cider cans around, but overall I think the most popular drink as the evening wore on was tea.
We headed off to our bed around 12.30 am but the last to leave wandered home around 3.00 am.

A couple of days later Michael and I collected his brother Jim from his B & B in Clonmel and we all went to Nenagh, in the north of Tipperary to find out more about the family Grandmother. She was born in Nenagh and we were off to the Genealogy centre to track down some details if we could. 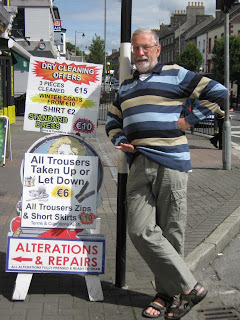 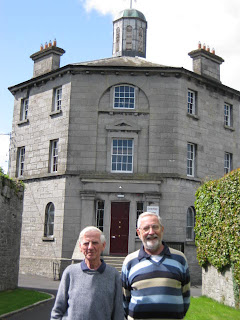 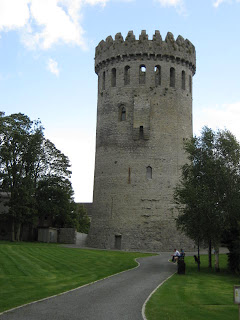 It was worth the trip, we got information including the address of the family home in Nenagh. Jim had already planned a trip to Kilkenny the next day and that proved handy as there is a Kilkenny connection to chase up there.
We drove out to the street where grandmother had lived and were surprised to find a parade of small terraced houses. Possibly little changed since she had lived there in 1875?!? 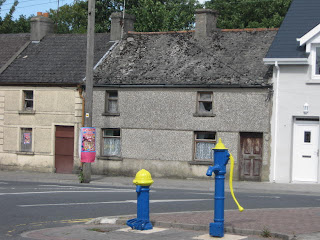 We, all three, arrived back at the farm for a welcome cuppa before we drove Jim back into Clonmel for the night.
The next morning was a sad day  -  time to leave.
The French say it much better when they say A Bientot - To the next time.
We had a quick round of photos, but trying to get all 3 boys in one place let alone all look the same way proved almost impossible. (might have to photoshop!) 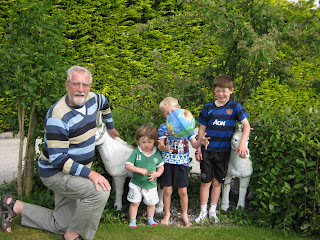 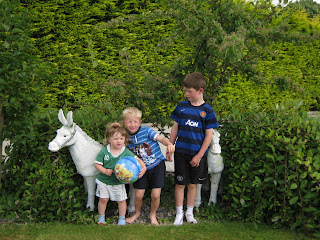 Then we drove away - across to Rosslare to await the ferry back to UK tomorrow morning. We were checked into a nice B & B by 2.30 pm .
So tomorrow we will Farewell Ireland. We know it will not be Goodbye, we cannot ever think that we will not return to this Magical Isle.

Posted by Big trip almost around AUS at 11:57