It's not such a long way - to Tipperary

Our Ferry trip was uneventful - but not so for one truck driver. For some reason he was staying in Fishguard with a few of Wales' finest. His truck was being 'gone through' and he was standing by looking very sheepish.  A little excitement for us all as we queued up to board. 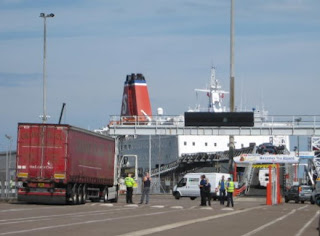 We arrived, after a smooth crossing, on time and drove straight out of the harbour, passing lots of B&B signs in nearly every garden. We stopped at a place that we had used a couple of times before but she was fully booked. She very kindly rang her friend down the road (who also ran a B&B), she had room so off we set. This B&B wasn't as nice as our 'usual', it was quite noisy in the evening as people - other guests and family members - came and went. One guest was travelling with a couple of dogs - they weren't too quiet either! We won't be spending our night there before getting the ferry back in 2 weeks time.
The next morning we did enjoy our first full Irish breakfast, it's like a full English breakfast but it includes Black and White pudding. Lovely.
On our first day in Ireland we had no real plans or destination so ambled around through coastal towns, south of  the Wicklow Mountains and through the towns of Carlow and Athy. 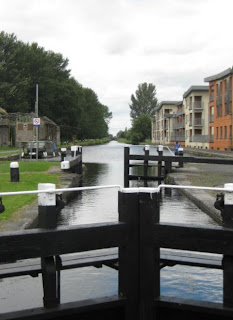 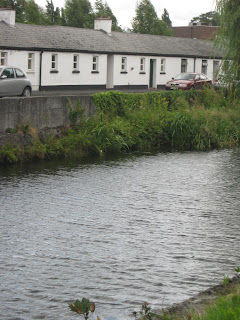 We visited a tiny Steam Engine Museum in Stradbally. It was quite a sorry little museum, but we had a nice chat with the little man there. We by-passed PortLaoise and headed up to Naas, where Michael went to school almost 60 years ago. His old school is now a plush hotel - we didn't enter the grounds but from the road way things are really very different.
It was getting late in the afternoon and we had not seen any B&Bs. A marked contrast between the area around Rosslare where nearly everyone has rooms. We spotted one sign and pulled in, but on further inspections we realised that it did not have an ensuite bathroom, and was no cheaper than others that did have ensuites. We changed our minds and drove on. We drove on for quite a while, through small towns and little villages crossing The Curragh to arrive in Kildare.
The Curragh is ancient grass land famous for being the training ground of famed Irish Thoroughbred horses, it is also an army training ground. 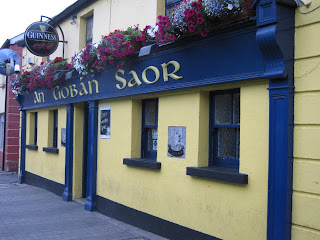 (Not where we stayed - just a quaint Kildare pub)


We parked in Kildare town and phoned a couple of B&Bs - both full but just across the road from us there was a pub offering accommodation. The Silken Thomas (Silken was his nickname because he had such a 'silken' voice, and a way with words.). The rooms were 'motel style' at the back of the pub, and they had one room left - we took it. The poor girl who was the housekeeper was still cleaning the rooms at 6.00pm so we went for a walk and a bite to eat (Indian), before getting back after 7.00pm.
(The reason for the late cleaning was probably that the check out time was 12 midday, and there were over 20 rooms!!
Our room was close to the stairs so was once again, quite busy as people arrived back from dinner, but it did settle down and we had a quiet night.
We enjoyed a lie in the next morning, getting up at 8.30 and wandered across to the pub dining room for another full Irish. I walked across to the Tourist Board and got lots of leaflets and info for the next couple of days. The nice chap there was very knowledgeable and I came away with lots of facts about Kildare. However, we didn't linger in Kildare and headed west. We stopped in a quaint village to buy some lunch to take away with us and we set off into the Slieve Bloom Mountains. A beautiful little road and as the misty rain started to fall we stopped for our lunch at a picnic area on top of the mountain. 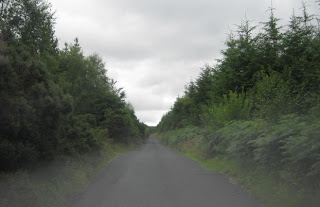 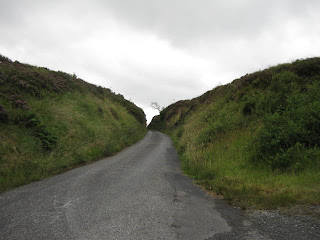 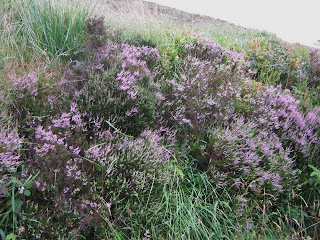 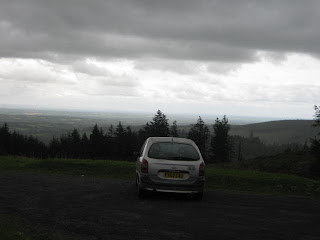 The rain didn't hang around long and we carried on into Birr where we had a stroll around and a cuppa.
Whilst in Birr we rang a couple of B&Bs in the area - one was a 'farmstay' but there was no reply. The second one was "The Old Harbour Master's House" on the canal side in the hamlet of Shannons Harbour. They had a room so we booked in.
As we were driving out of Birr my mobile rang - it was the lady from the farm stay, calling back as she'd missed my call. She actually didn't have a vacancy so it was just as well that we'd booked into the Harbour Master's House. I wonder how that lady will react when she realises that she'd made a call to Australia!
We drove out through Banagher (checking out to see if there was anywhere there suitable for dinner -  there wasn't) and onto Shannon Harbour. The B&B was one of 3 houses on the canal side.
It was exquisite. 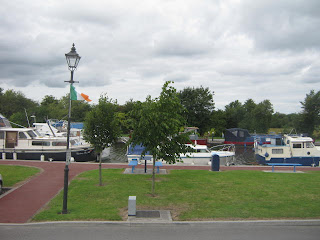 The view from our bedroom window in The Harbour Master's House. 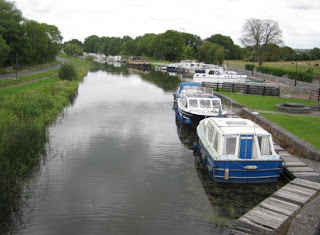 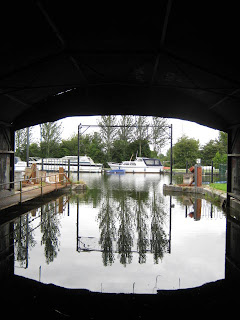 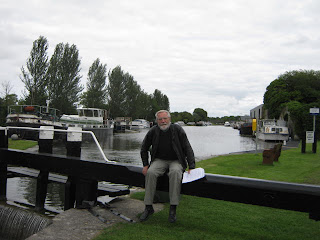 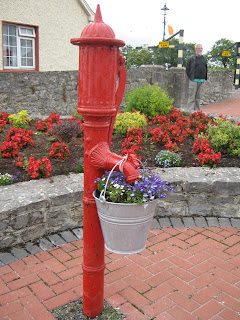 The other houses were both old schools, one was the original but this became too small and the second one had to be built - this was then closed as the community dwindled from over 1000 people to only 30. There were 2 other buildings, both derelict. One was the Grand Hotel, the other a huge Garda (police) station.
The village has an Inn which opens 'sometimes' and a store/pub which was where we would be having dinner.

The village falls under the control of the Irish Water Authority and the old buildings are heritage listed - that has resulted in them just being sealed off and allowed to crumble and decay.
This is such a quiet lovely spot - no traffic past the house. We wanted somewhere quiet and we'd found it. We walked around the canal side, and then down to the pub for dinner - choice of chicken, coleslaw and chips, burger and chips or pizza. We had a choice of 6 pizzas, so went with that - for a frozen pizza it was very good. Also having dinner were the other B&B guests, a group of 4 Americans and a young German couple. We got chatting to the German couple, who were from Hamburg. Would you believe that he was a Medical Engineer working for Phillips on Radiological Medical Equipment!!

The next morning we were off bright and early - well, early for Ireland. We were away by 10.00am.
We crossed the canal and headed along some great country roads, through Shannonbridge and on past the ancient monastic settlement of Clonmacnoise. We have been to Clonmacnoise a couple of times before. The first visit on our honeymoon, (1977) and then again in 1990s. Things had changed between visits with a fantastic 'interpretive centre' having been built by our second visit. The stunningly beautiful Celtic crosses are on display in a protective environment but are well lit and shown to perfection. This time though we drove on.
We drove into Michael's old childhood 'stomping ground' - Athlone. On the River Shannon. 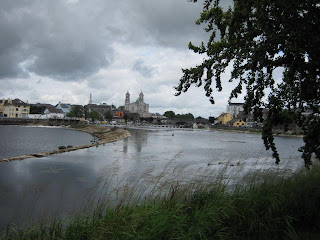 In the centre of town nothing much has changed, there is a different one way system but the town has spread out in size and is much bigger - there are a couple of big shopping centres. (If you're into shopping.)

After Athlone we drove to Ballinasloe, home to the famous annual Irish Horse Sales. 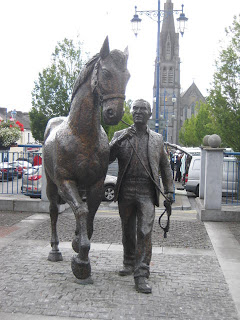 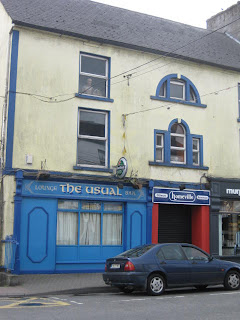 The Saturday market was on, but there were only about 8 stalls. We walked up and down the main streets but the town seems to have lost the vibrancy that it had in the '70s and '80s. 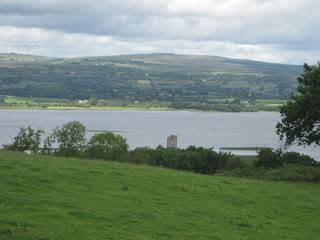 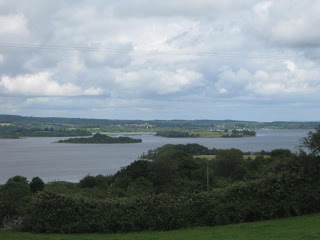 We drove on to Portumna, a little town on the shores of Lough Derg.
A very nice little town - made especially nice by the fact that there was no 'Pay and Park' parking.
Every other town has been obsessed with parking restrictions. It doesn't improve the flow of traffic in the city centre, or the quality of drivers' parking but it brings in a few Euro for councils.
Nowhere here in Ireland, have we seen any sign of a traffic warden enforcing these regulations.
We enjoyed a snack and a coffee at a little cafe before driving along the edge of Lough Derg to the towns of Killaloo and Ballina (one either side of the bridge).
Every B&B we tried was full - there was obviously something on in this area, this weekend.
It was early afternoon as we drove into the outskirts of Limerick City.
The second B&B/Guesthouse we tried was in a nice quiet side road but didn't have an ensuite bathroom. We were both keen to get off the road so we took the room. Unlike the previous non ensuite room, this one's price reflected it's status - it was about 20% less than one with an ensuite.
The landlady kindly made us a lovely cup of tea (and some mini muffins) and then we had a rest before heading out to a local Chinese restaurant for dinner. Unusually the Chinese offered 'Early Bird Specials' every day of the week - it had been a while since we last had Chinese and we really enjoyed it.
Then it was back to B&B, log on and blog!

2013 is Ireland's Year of the Gathering. They are heavily promoting family reunions and that's actually our reason for visiting too. We're poised here in Limerick ready for our 'gathering' - tomorrow we're off into Tipperary. We will spend a couple of days with Michael's cousins near Cahir then we join other cousins, and the 'cousins from Sydney', in Clonmel, where Michael's mother came from.

Posted by Big trip almost around AUS at 14:42