Irish country houses and farms do not have house numbers and the roads they live have until recently had no numbers. The large roads are N for National, the smaller roads are R for Rural and the much smaller, usually single track roads have now been designated L for Local (I thought it meant lane). This still doesn't go on the postal address but it does help if you have been given a road number.
The first time we visited our farming cousins (their farm is near Cahir),we got very, very lost. Stopping several times to ask different people directions. The next time, years later, we thought we had it right but after driving up and down the same country road we stopped and rang them, the reply we got was, "Is that you driving up and down outside our house, in that little white car?" It was! (They had landscaped the frontage, so it looked completely different.)
This time we were feeling very, very pleased with ourselves because we drove straight there and up the driveway. Quel disappointment - they weren't home, they were busy chatting after Mass and rolled up a few minutes later. There were hugs all round then. It was lovely to relax with family again. We just 'chilled out' around the place meeting up again with their daughter Tina, her husband Declan and their 3 boys. Meeting them you realise why the word is boisterous, not girlsterous they are aged 8, 5 and 2 and are full of energy.
Michael is 'semi-retired'.  The 'semi' part of the word being the most important, that means that he now only works a 40 hour week. He still runs the farm with some cattle and some sheep, although not as many as he once had. 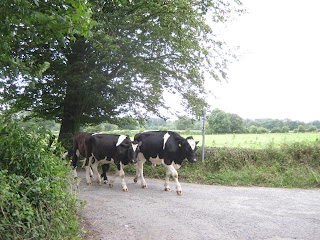 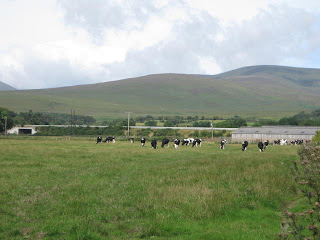 One day it was market day over in the nearby town of Fermoy, so we all (the 4 of us and 2 of the grandchildren - the littlest one was at creche) went over to the Mart. It was in an undercover, purpose built, huge building. It was very noisy and very smelly - a REAL stock market.

Michael C also has an interest in motorcars,his particular marque being NSU.
He has quite a collection, in varying stages of restoration. Those that he has restored are just beautiful, he has done a very fine job. 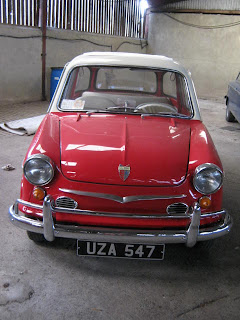 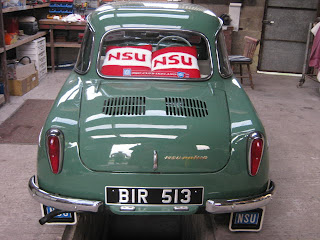 After a few days of being spoilt and allowed to sit and do nothing we took a short break from the farm and checked into the hotel in Clonmel for 4 days, where we were starting to assemble for the family get together. I can't call it a reunion because Imelda and her partner Ian, from Sydney have not met anyone before.
The Clonmel Park Hotel is actually 'in receivership' at the moment but is trading as usual.
Our room smelt really damp and stale with a very dark stain on the floor indicating the extent of the damage. Before we could do anything about it, Una's friend dropped by. She is an ex-mayor of Clonmel and still very well known and liked in the town. She spoke to the manager and the next morning our new room was ready!
The first room had a view over the delivery yards, kitchen and a little bit of a field. 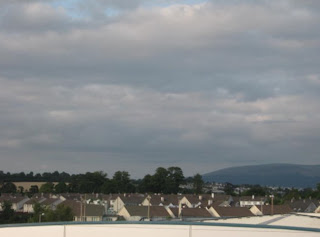 The new room looks out the front of the hotel, across the car park and a local suburb to a fine view of the Knockmealdown Mountains. Much nicer, oh, and it smells better too. 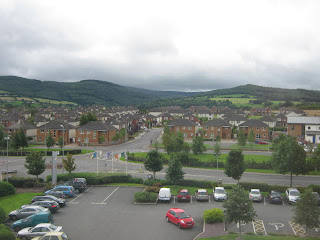 The hotel staff are very good, fast and efficient but we would all rather have some pre-emptive quality control rather than a fast complaint response. The one main drawback they can't help us with - the hotel gives a discount for children - 100% discount for children under 12 years. And it's school holidays!! There are children everywhere - at breakfast it's like dining in the middle of a kindergarten.
We have now discovered that if we get to breakfast before 8.15 there are very few children around, they all seem to be late risers and descend on the dining room after 8.30.
The price was right though and there are a few of us staying here, so we don't have to keep in touch by phone or driving around town.
Our accommodation deal included 2 evening meals, so we all dined together the first evening.
The food was good and we were all too full to consider dessert.
The next morning Una was the tour guide, as she had spent some time in Clonmel town as a child.
She took us around the town and to the street where Imelda's mother had lived before leaving for Australia in 1930s. 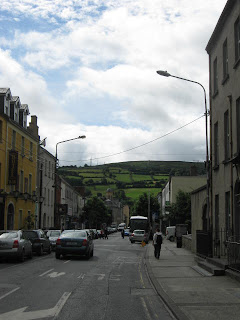 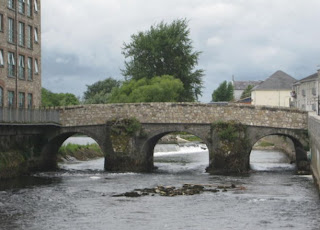 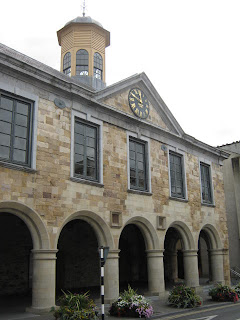 In the afternoon Michael drove us all (himself, me, Una, Imelda and Ian) out to the farm to meet Michael and Anne. We took a scenic route through small villages, down lanes (sorry, L roads), to the farm's local village and then surprised ourselves again by finding the farm first try.
The afternoon was spent with everyone sitting in the kitchen, chatting happily whilst Anne slaved over the stove. There was never a quiet moment - must be a Kelly family trait that - talking non-stop!!
After a great dinner we all drove out to a local GAA sports' ground to watch Cathal, Tina's eldest boy, play hurling. The under 10 team was playing but was short on numbers so although he's a bit young for the team (he plays in the under 8s) he made up the numbers. He certainly didn't look out of place, he 'held his own' very well.  (Hurling is a cross between hockey and lacrosse (?) I think, but I'll probably be roundly corrected by the cousins when they read this!) 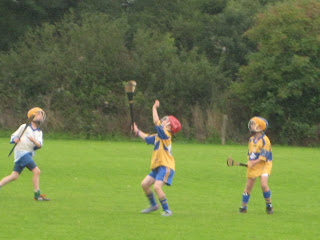 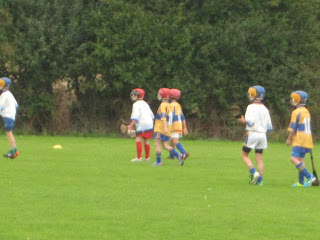 When a short break was called we left to drive back to Clonmel whilst there was still daylight.
We all just went straight to our rooms, all tired after a great day out.
The next morning we were surprised to see Ian at breakfast on his own, Imelda was sick.
It seems that the gastric bug that she got in Malta had flared up and she was quite sick. Ian called in a doctor, and with Ian in attendance Imelda spent a very quiet day in their hotel room drinking water and black tea whilst the three of us went across town to meet up with the 'town' cousins, Jim and Kathleen.
Michael's brother, Jim, had arrived from St Albans so it was a nice little gathering. With all the Michaels and the Jims in the family (neither of the Jims or Michaels are called anything else) we are going to start referring to Jim from St Albans as Jim M, and Jim in Clonmel as Jim C, and Michael M and Michael C. At one get together a few years ago, we had 3 Michaels and 2 Jims  around the dinner table - at least it meant you got a response from someone - only 2 names to remember!)
It was late afternoon, early evening when we dropped Jim M off at his lodgings (he's at a B & B in town as he doesn't have a car with him and is staying on after most of us travel on). We went back to the hotel for another evening meal - sans Imelda and Ian. The menu had changed slightly but the lovely Ocean Sea Bass was still there - it's really good. Tonight it was served on a bed of mashed potato mixed with spring onions. The accompanying vegetables were mashed potato, diced carrots and parsnip, and a slice of a herb and grated potato bake - this is Ireland after all  -you must eat your potatoes. We all had a light starter this time so were able to make room for a dessert - we really will have to do more sightseeing to walk off these calories. (No glass of wine with dinner tonight - for the price of one glass in the restaurant I bought a bottle at the supermarket and had a drink in our room before and after dinner - more calories!!!) Cheers!
The next day the sunshine was back, it had rained all day the day before. We had a nice early breakfast  relatively child free - and headed out into the Knockmealdown Mountains, along a 'tourist drive' through the mountains at 'The Vee'. The scenic drive continued to a monastery at Mount Mellory where we took another road to complete a circular drive through the Nire River Valley back into Clonmel. It was really beautiful, the heather was in bloom, the grass was a particularly lovely shade of green and there were only a few sheep, and even less motorists on the road. 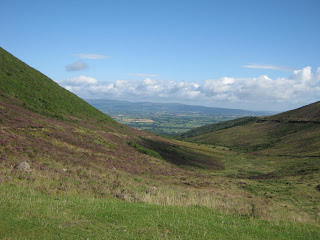 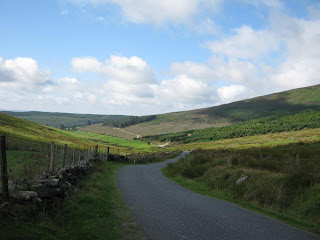 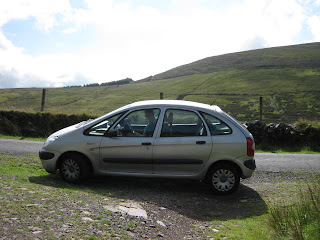 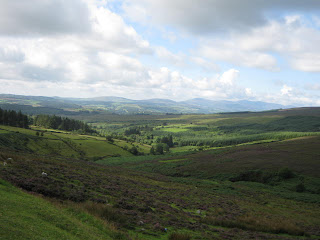 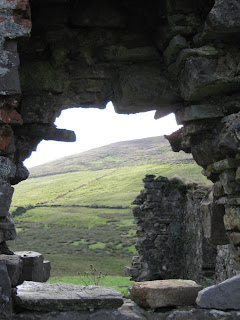 Back in Clonmel we visited the South Tipperary Museum, a rather small place. As we were leaving Jim M came through the doors - Clonmel IS a small town.
We headed back to the hotel for a light lunch and a rest before the Family Dinner tonight at a local restaurant.  This dinner is a chance for the 'first cousins' to meet and chat with Imelda. (she is recovering slowly and hopes to join us). Tomorrow there is a big family evening at Tina and Declan's house where the second cousins, children and family friends will all get together.
And that will be another blog.