Our first evening in Hereford was a mild balmy one and we walked down into and around the town, exploring the almost deserted, early evening streets of this lovely town (city - as it has a Cathedral.) 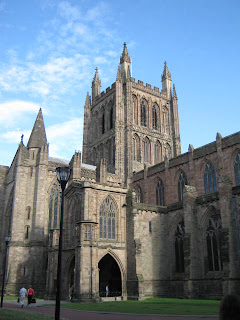 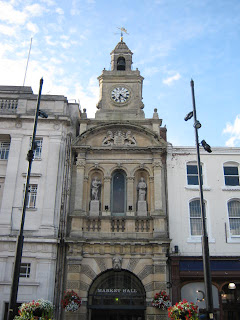 The sculptures of the Hereford Bull and Edward Edgar were particular favourites. 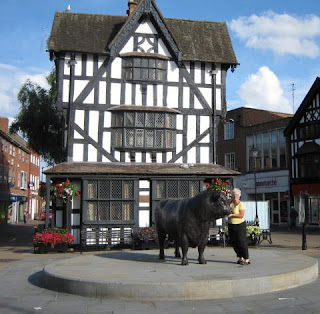 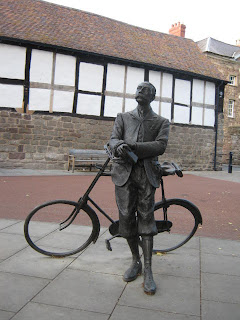 This pub sign was a delight too -  "We'll have 2 children please!" 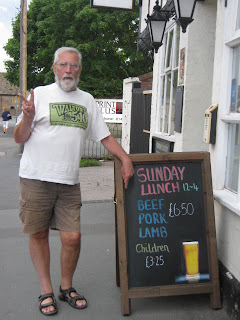 We found the Indian restaurant recommended by the Guest House and it was worth the walk - excellent.
During the night the rain started and then settled in, and it was in for the whole day on Sunday. We ventured out to buy a quick snack lunch and for dinner we got some fish and chips. The rest of the day we sprawled around and relaxed.
The next day, despite the rain, it was time to move on. We drove into town, parked near the Cathedral and started our cultural tour with a look around the Cathedral. What a really beautiful place. Hereford Cathedral is one of England's smaller cathedrals, but it dates back to the 8th Century. 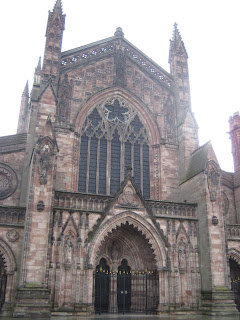 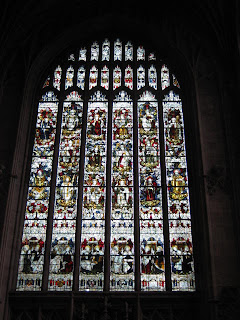 After looking around at the ancient tombs, carvings and amazing stained glass windows we adjourned to the cafe for a coffee before going to see The Magna Carta and the Mappa Mundi exhibition.

Hereford's 1217 Magna Carta may have lost its seal, and be only the size of an A3 piece of paper but what it symbolises is incredible. It is considered to be the foundation of English common law. Stating - No free man shall be arrested, imprisoned, dispossessed, outlawed, exiled or in any way victimised, or attacked except by the lawful judgement of his peers or by the law of the land.

As if that incredible document wasn't enough we then went through the doors, into the special room and saw The Mappa Mundi.

The Mappa Mundi is a late 14th century map of the world, the greatest surviving medieval world map. It is a map of the world, drawn on a calf's hide and has Jerusalem at it's centre - as it is a map of the world through a Christian perspective. The three known continents, Asia, Europe and Africa are shown and the whole map has amazing detail with drawings of varying complexity showing architecture, animals, plant and birds. It's an amazing item and doubly so when you consider that it has been locked away in Hereford for all this time. (The Dean proposed selling it when the Cathedral needed funds but the townspeople suddenly took an interest and raised funds, matched by UNESCO and Paul Getty, and it is now saved and on permanent display.) Michael proposed that when he dies he be buried at the local ASDA carpark, possibly the ugliest place in Hereford.

But the culture did not stop there, also in Hereford Cathedral is 'The Chained Library'.
This is a unique display. Ancient books in bookcases and on chains, as they would have been in the 17th century. There are also beautiful illustrated manuscripts on display. These illustrations still have such vibrant colours and the depth of the embossed, gold relief areas is stunning.

Obviously none of these 'icons' could be photographed - but the memory will never fade, the place was incredible. A highlight of the trip.

Then it was time to once more say goodbye to England and enter Wales. We drove through persistent rain to the coast and the seaside town of Aberystwyth.
(Memories of my childhood, day trips to the seaside. I don't actually remember anything about the town, just that we went there!) 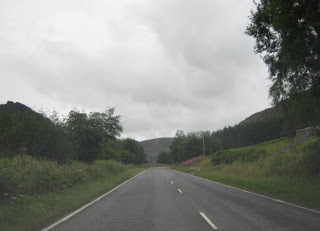 We had our usual 3 strikes at a B & B. 1st one - "Mum's not in", from 3 little girls aged about 7.
2nd one - one the seafront wanted 95 pounds! Outside the budget.
3rd one - right next door to number 2, and as it was listed as a 'guest house' not a hotel, was within the budget. I was given a choice of rooms, one on the 1st floor overlooking the garden or on the 2nd floor overlooking the sea. I chose to climb an extra flight of stairs and sit and watch the waves.
(And the people). 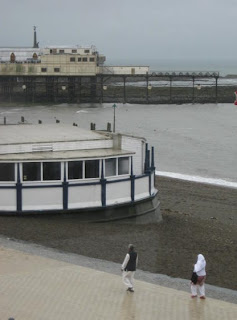 Our landlady optimistically told us that it was going to clear up and around 3pm it did. We set off to explore Aberystwyth.  Not a gaudy, brash seaside town and realistically without the University and the student accommodation the place would be really quiet. But it was a nice holiday town, and we enjoyed a stroll along the seafront and then though the streets. 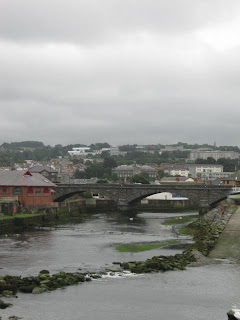 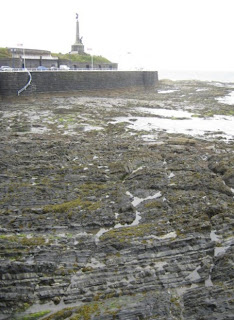 We had dinner at The All American Diner overlooking the sea, then back to our room to sit and watch the sunset. 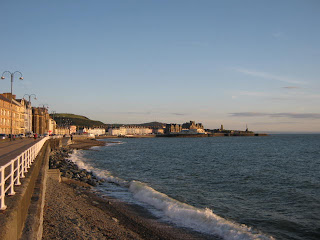 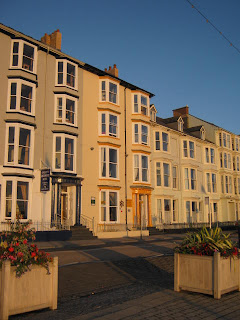 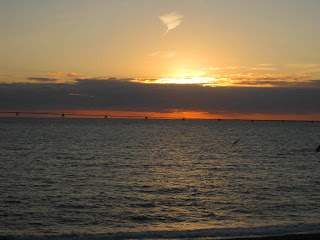 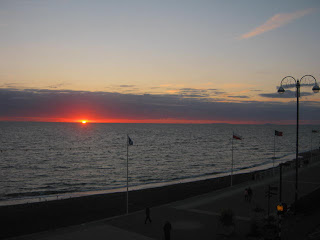 That night we kept the window and curtains open to get the most of our sea front location. 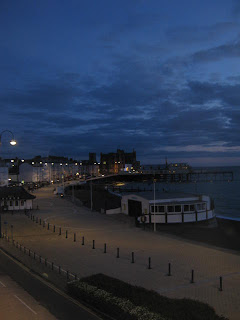 The next day we moved southwards, to Fishguard where we would be catching the Ferry to Ireland.
We stopped for lunch in the coastal town of Cardigan and then carried on. We didn't have any luck with a B & B in Fishguard. All were either, booked out or not replying to phone or personal enquiry.
Nowhere is very far away in Wales, so we took the road out towards Haverfordwest making enquiries at B & Bs spotted on the way - but this time they were either full, out or out of budget.
Time to try the tourist office in Haverfordwest - it took a while to find it (an embossed black letter i on a black sign does not stand out!) For a 2 pound fee they booked us in at a Farm stay B & B 2 miles out of town. We drove straight there and it was lovely. (OK it did smell of turkey s***, but what do you expect on a farm?)
We drove back into town for an Indian meal - not the best! (we didn't leave a tip).
That night we had one of the best sleeps we've had on this trip - it was so quiet!!

After a really, hearty breakfast we carried on west to the town of St Davids, on the Pembrokeshire coast. A small town but the ruined Bishop's Palace is enormous. The Cathedral is rather grand too. 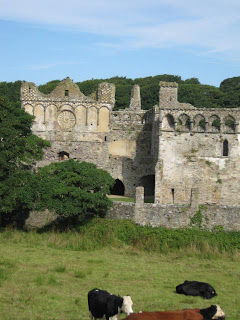 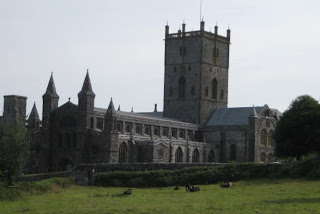 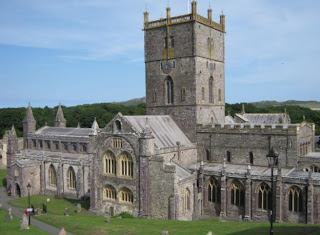 We strolled around, up and down the hilly streets and then returned to the car to head out to the coast at Whitesands. I expected a little settlement out there, maybe a cafe for a coffee, but all there was, was a car park and white, sandy beach. There was an attendant collecting fees at the road's end so we just turned around and left. Michael wanted to take the minor roads (tracks) back towards Fishguard but after a few minutes he'd had enough - all these tourists!!!
We rejoined the main road and parked near the Ferry Terminus, had lunch overlooking the harbour, 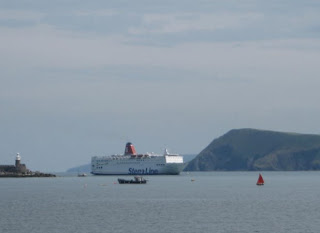 and then boarded the Stena Europe Ferry to Ireland...... 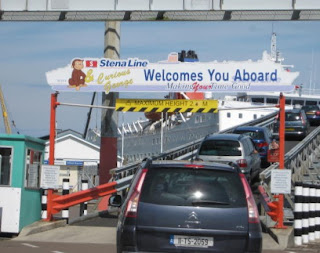 Posted by Big trip almost around AUS at 14:10