We've always maintained that if you want to shock an Irish landlady all you have to do is to request breakfast before 8.00am. That works all over Ireland but not in Rosslare where they are used to early starts to catch the ferry. We were back in Rosslare and just tried potluck and picked a different B & B. Our host didn't bat an eyelid and happily offered to cook our breakfast at 7.30am so we were ready and off on the 9.00am ferry back to Fishguard. The morning weather in Ireland had been improving with the promise of sunshine but Wales was cool, misty and wet! 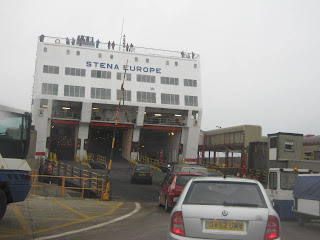 We headed south across Pembrokeshire to the famous Pendine Sands, home of the Land Speed Records in 1920s. 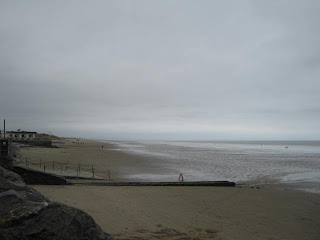 In 1926 'Babs' driven by Parry Thomas held the record but this was taken by Bluebird, driven by Donald Campbell in 1927. Babs effort to regain the title ended in tragedy when the car overturned Parry Thomas.
The car was towed up the beach and buried in the dunes. There it stayed until 1963 when permission was obtained and another Welshman, Owen Wyn Owen,  restored the car. This car is on display in pride of place in the Museum of Speed in Pendine village. It is also often seen at classic car race days. 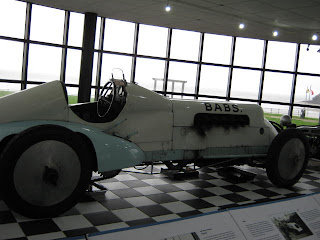 Also on display in this little, free, museum is a magnificent Brough Superior motorcycle. This one is not the actual motorbike ridden by Lawrence of Arabia, but it is the one seen in the opening credits of the movie of that name. Apparently though it was not ridden by Peter O'Toole, he was too nervous to ride it.
There was only one B & B in Pendine and they didn't have any rooms available. They weren't full but the other rooms were not ready!! There was no indication of them being prepared any time soon so we drove on out of Pendine into St Clears. We decided not to try our luck with a B & B here, we checked into a Travel lodge. Here we got a guaranteed large room, good bed and shower. No breakfast included though.
We anticipated paying near the high end of our budget. The receptionist did tell me that I could use the desk phone and phone 'central bookings' or go on line and I might get it a few pounds cheaper, I decided not to bother and accepted the 69 pound price. No sooner had we checked in when the receptionist knocked on the door - as she had gone to enter our details into the computer the price on the screen had changed - it was now 49 pounds!! She gave us 20 pounds back. If I had phoned 'central' I would have missed that price by 5 minutes! Bargain!!
We checked out the 'Little Chef' next door for dinner and were pleasantly surprised, the burgers were really good and the chips were real potatoes, nice and fat, not little strings. It will definitely do for breakfast.
Little Chef restaurants started in Reading in 1958, when the motorways started in UK. They were roadside cafes for people on the motorways, so that they could get a meal without going into towns. At one stage there were over 300 Little Chefs, now there are less than 30. The manageress told us that the new owners of the Little Chef chain do seem to be getting things done, some equipment that they have been requesting for years has now arrived.
The one down side to the whole day was the news that Michael's favourite author, Elmore Leonard has died.
We don't have all his books yet but sadly,now, there will be no more.

The next morning, after our Little Chef breakfast we set out to cross into England. 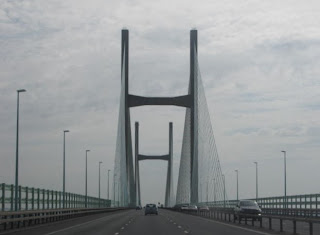 To cover the miles quickly and to get around the cities of Swansea, Newport and Cardiff we used the motorway, crossed the Severn Bridge and then headed East before exiting the motorway near Chippenham. It was exactly 2 hours since we had left St Clears and as we drove into Chippenham I spotted a little cafe tucked between a craft shop and a pub. It looked clean and tidy and there was a queue out the door - a good sign at lunchtime. We found a parking spot nearby and enjoyed a great lunch.
We stayed on the main A road almost directly south through Warminster, Shaftsbury and Blandford Forum then we took side roads and a narrow local back road to the village of Crossways and our friend Pam. 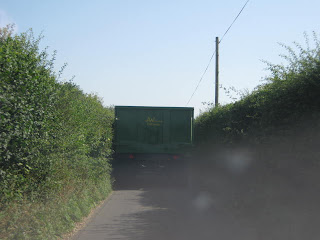 Following a large truck or tractor and trailer is great on these narrow lanes, all traffic coming the other way is well off the road!

Once again the memory served us well - we found her house first try. 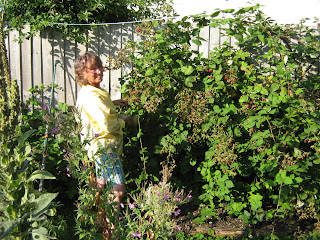 Pam is an old friend from Perth, who Michael first met at a Permaculture meeting. He was wearing a T shirt with a 2CV on it when she tapped him on the shoulder and said, "I want one of those". The rest is history, and she now has two 2CVs, one in Perth and one in Dorset. I've a feeling that the one in Dorset is going to be our sightseeing bus around Dorset the next couple of days.

Posted by Big trip almost around AUS at 12:42