The next morning we were delighted to watch the little kids arrive at the kindergarten play ground in the garden that we could see from our window. They were so delighted they were just running from one play thing to another. There was a great slide too, check out the feet on the slide, making it nice and stable. 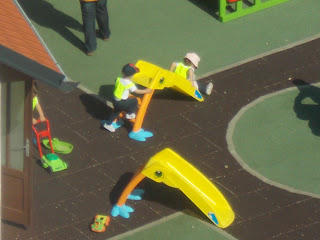 We were ready for our 9.00am departure but we gathered in the hotel lobby for a group photo – an hotel staff member kindly took the photo, then everyone handed him their camera to take the same photo for them. Strange really when we had all just exchanged email addresses.

Anyway we did all board the coach and head on to the Hungarian border. At the border a Croatian police man boarded the bus, collected the passports. We got the passports back and the coach edged on the the Hungarian customs post, here the passports were collected again, but this time we all had to get off the coach, line up and as our name was called we stepped forward, collected our passports and boarded the coach.
The coach luggage store was searched, apparently there is some people smuggling going on.
Once in Hungary we stopped for our pee stop, just a pee stop – no coffee break. Then we headed on to a marche where we did have a coffee and lunch break. Although Hungary's currency is the Forint the marche to took euro and even gave change in euro.

As we headed on towards Budapest Antonia changed what she could from convertible Mark and Kuna into euro for us. We only had 9 convertible mark which we gave to Antonia to put in her 'kitty' for the next group's pee and coffee stops. The Kuna only came to 5 euro and that was a nice easy conversion, some people had a couple of hundred Kuna and Antonia didn't have that much euro, they would have to go to an exchange centre in Budapest or Vienna.
We arrived in Budapest, we got a mini sightseeing tour on our way to the port, touring around the one way streets. 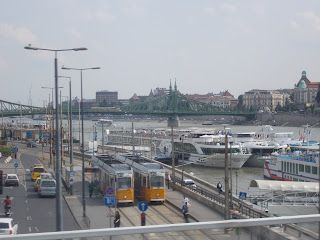 At the dock we said goodbye to the one couple not continuing the tour with the cruise, they had a few days in Budapest before returning to work! Work? Ah, yes we remember that. 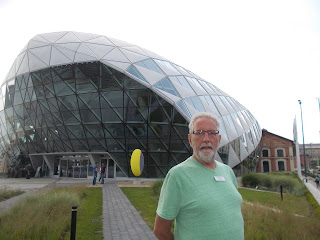 We checked in at reception and were given our cabin 'key', it was a different number to the one that we'd booked all those months ago, but as it began with a 3 not a 2 I knew it was on a higher deck so didn't complain.
It was also almost exactly above the cabin that we had booked, so I knew it would be just as quiet.
It turned out to be much better because although there is a sun deck above us, it doesn't extend the full length of the boat and our cabin is not under it, so we don't get any foot traffic noise.
We were enthralled with the cabin, bright, roomy and so clean. I couldn't wait to unpack – the delight of unpacking for more than a couple of nights. The cases were soon empty and stowed under the bed. Then I realised that we missing a pair of trousers and a shirt for Michael – oops! they're still hanging in the wardrobe of the Hilton in Zagreb. As Michael hadn't gone to the dinner, he hadn't worn them and I'd forgotten them. Luckily we never travel with expensive clothes (actually, we don't have that many expensive clothes), and they can easily be replaced, it just means that I might have to wash his shirts more often.

Things started at 6.00pm with a safety briefing and introduction in the lounge. This was followed by dinner. On a score out of 10 we had to give 10 – what a great start.

After dinner, exactly as scheduled, at 9.00pm we set off on our night cruise along the Danube through Budapest. What a beautiful city, simply stunning at night, everyone was up on deck, cameras and ipads everywhere. The ship returned to dock and by 10.30 were fast asleep in bed. 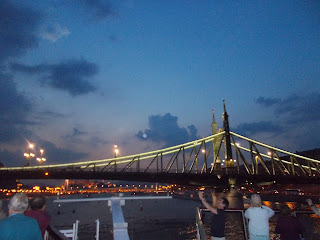 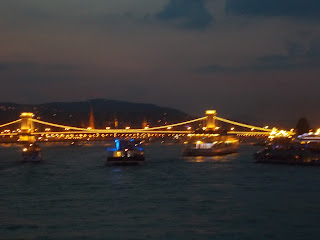 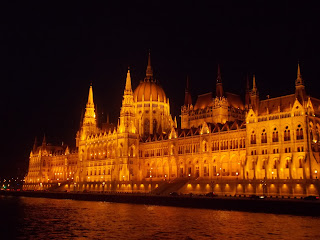 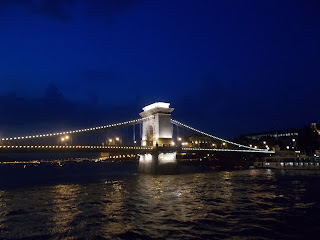 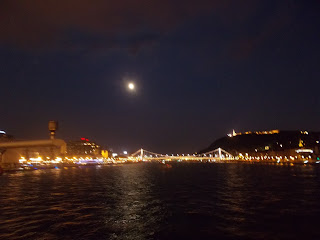 We slept well and enjoyed another magnificent breakfast, it really is going to be hard to go back to 3 Weetbix when we get home.
There was an organised tour of the city, Budapest, starting at 9.00. It was a mix of bus and walking but as it was for 4 hours both decided to relax on board the ship, saving our energy for Vienna.
The cruise started right on schedule sailing out of Budapest at 1.00pm. 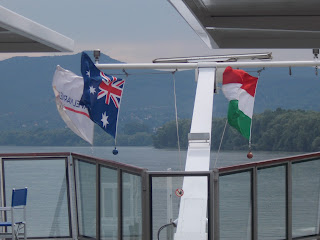 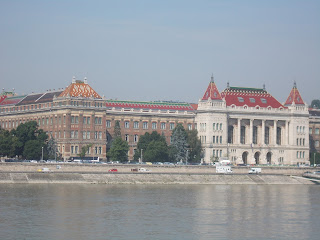 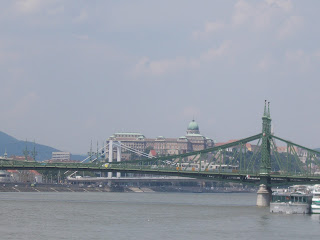 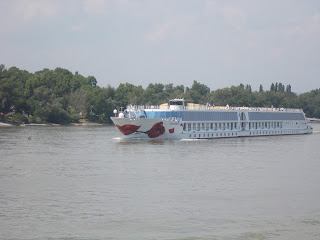 There were a few other cruise boats around, and other more active river craft. 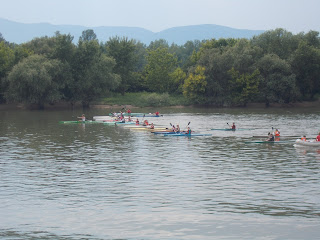 Michael actually slept for most of the afternoon and in the evening again declined to come to dinner –the Welcome Dinner. He has a stomach upset and feels hot and cold, hopefully by staying in the cabin we won't start a ship wide epidemic. There are plenty of hand disinfect stations around and we make sure that we use them everytime.

I went down to the Welcome drinks, got my glass of champagne and long stem rose. I sat with Ralph and Hanny and others from the coach trip. (One of the couples on the tour said that they deliberately went on a coach trip before the cruise so that they didn't come aboard not knowing anyone.)
Michael missed out on another feast, he had some crisps and biscuits in the cabin. We agreed that if he wasn't better at breakfast, we'd forego the sightseeing in Vienna and find a doctor. 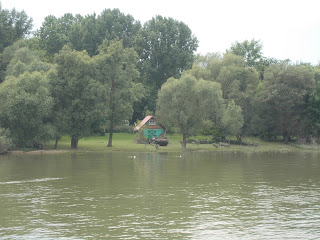 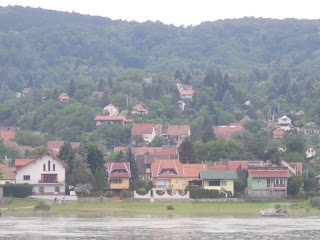 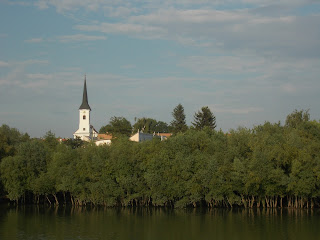 The next morning, having cruised through Slovakia in the early morning, we were now in Austria. Michael did make it down to breakfast, just a little toast and black tea. 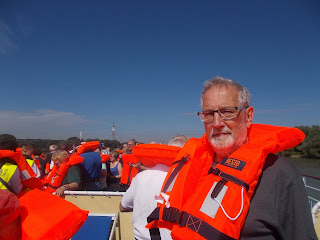 Later in the morning we had the emergency drill – which went smoothly. Later we had to all leave the sun deck as there were lots of locks and low bridges coming up and the deck shades had to be lowered, side rails removed etc.
We arrived in Vienna around lunch time. We opted for the 'light lunch' in the lounge rather than go into to the dining room. It was soup, salads and a choice of sandwich or hot meal too. Certainly plenty of food on board. There was an organised walking tour of the city but we relaxed on board, planning to 'do our own thing' in Vienna tomorrow.
We watched a bit of telly and then slept another very peaceful sleep.

The next morning  we got our boarding passes and tickets for the shuttle bus.  We decided not to go on any of the offered options but to do our own thing. We took the 10.00am shuttle into Vienna. The drop off point was at Schwedenplatz, right next to the start point for the 'Ring Tram'.
We decided to start slowly and got on the tram, it was very quiet with only 4 other people on board.     It cost 7 euro each, this included a commentary, in English.
What an amazing road, so many incredible buildings preserved on this circular road. So many, so much stunning architecture. This is a city to add to the list of European cities we could spend more time visiting.     We completed the 'ring' and arrived back at Swedenplatz.
We studied the tourist map that we had, finding the addresses of a friend's grandparents home and business in Vienna in the 1930s. It was a bit confusing at first as all the public transport routes were also shown on the street map. Eventually we got it sorted and realised that one Ubahn train route ran directly from Swedenplatz to the U station close to those addresses. We headed down into the station and managed to navigate our way through the ticket choices, after we'd found how to change to English language. We chose our tickets but the machine kept rejecting our 50 euro note, not disheartened I just paid by visa card and we proceeded to the right platform and out to the suburbs.
It was really very easy, and after a very short walk we were standing in front of the apartment block and then shop in question. Lots of photos later, we were back on board the train back into the citty.
We didn't go back to Swedenplatz, we got off at Karlsplatz. It was close to lunch time so when we spotted a Mcdonalds, it was burger time.
On our list of things to do in Vienna was a tour based around the movie The Third Man. One tour was not available today, and the other went from a park near the station. We walked 3 sides of the square and then spotted the 'van' ticket office. It was only 7 euro a ticket but was actually only a tour of the sewers under the park. The entrance was the one used in the movie but we wanted a few more locations above ground so moved on. 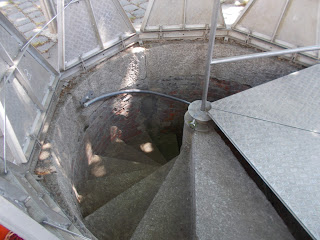 We walked along part of the ring, past the opera house and art galleries, enjoying strolling in this lovely citywhich had just hosted the eurovision song contest. 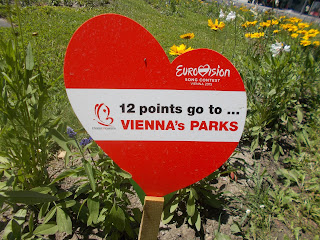 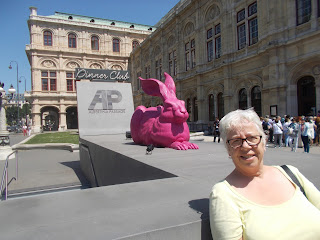 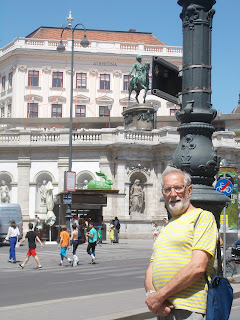 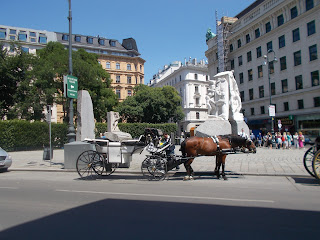 We walked down a couple of side streets and then along past the Albertina Museum. Michael then started 'to fade' in the 30+ heat, as it was over an hour and a half to wait for the shuttle bus back to the ship, we found a taxi rank and headed back to the ship.
It was a nice ride through the side streets of Vienna, almost a little too exciting though when a car coming the other way didn't seem to realise that it was a two way street and almost ran into the side of the taxi.
We did arrive safely back at the ship and settled back in. We had another amazing meal, it's going to  be difficult not to put on weight on this trip. 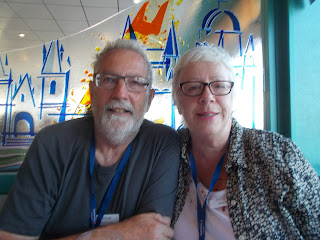 After dinner we watched the movie Gran Torino on tv– in Austrian, most strange. No one can reproduce that Clint Eastwood breathless menace in any language.
Tomorrow we cruise through the Wachau Valley and visit Durnstein and Melk Abbey.
Posted by Big trip almost around AUS at 13:31