Cruising through the Wachau Valley, visiting Durnstein and Melk Abbey 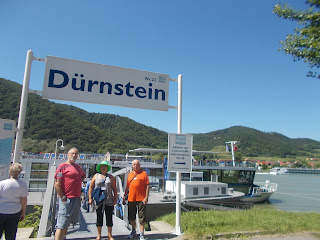 We docked in Durnstein around 7.30am and after breakfast left the ship (or is it a boat?) to board a little 'train' (now, this really wasn't a train, it was a tractor pulling a few carriages), driven by the epitome of an Austrian.
We paid our 7euro fare, and that covered us for a return trip if we wanted it or we could walk back. We were pretty sure we'd be having a return ride.
The 'train' took a lovely circuitous route through the vineyards and a couple of outer 'suburbs' of Durnstein. Very picturesque. 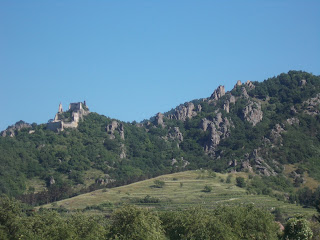 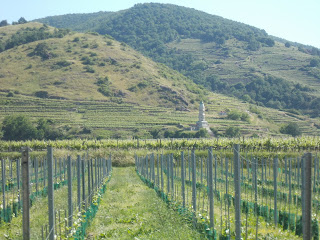 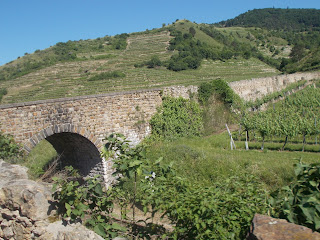 Then we drove into Durnstein along the narrow cobbled streets before arriving in the square and setting off on foot to explore. What a lovely town (yet again!) Lots of souvenir shops, cafes and plenty of photo ops. 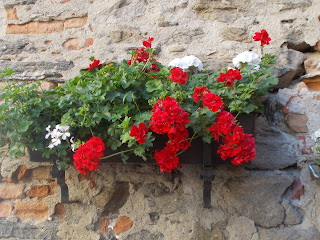 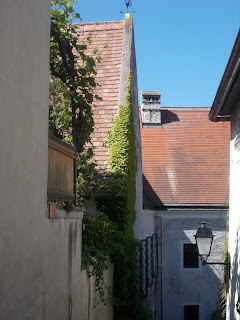 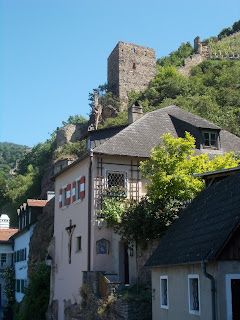 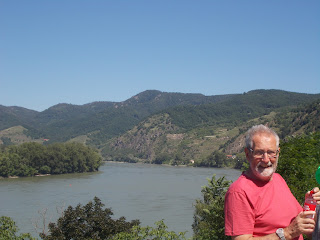 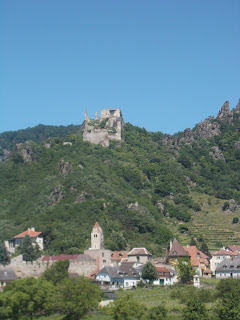 On top of the hill was the ruins of the castle said to have been the prison of Richard the Lionheart in 1193. The story goes that when Richard was trying to get back home his boat foundered on the rocks of the Adriatic and he tried to sneak through Austria disguised as a peasant. Somebody probably turned him in, he was arrested and imprisoned by Leopold V, the Babenberg duke ruling the country at that time. It seems there was a bit of spite involved as Leopold felt that he had been insulted by Richard in Palestine during the Crusades.
We looked up at the castle, but didn't feel inclined to make the climb up there.

We did the tourist trek around the shops and then found a nice little coffee shop. The one girl running the place was really busy but most efficient. We tried something different, Michael had a Coca Cola Limone (pure lemon juice in the bottom of a glass, topped up with Coca Cola) and I had a Kaffe Cool (A Short black with a scoop of ice cream in it). Both were fantastic, number one on a list of great drinks. 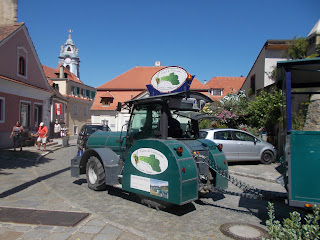 Then we got the 'train' back to the ship, it didn't do a scenic trip, just the most direct route.

All aboard and time for lunch, a few hardy folks took the opportunity to get on the bicycles and headed off to meet up with the ship in Melk later in the afternoon, only 43kms away. 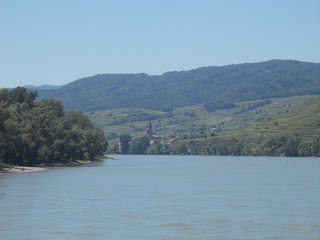 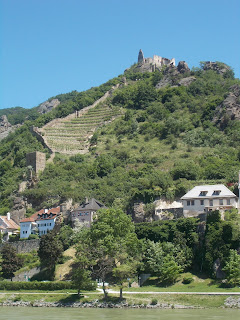 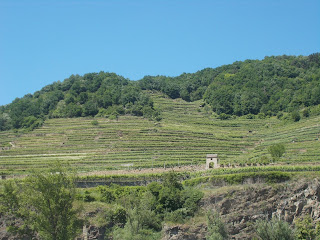 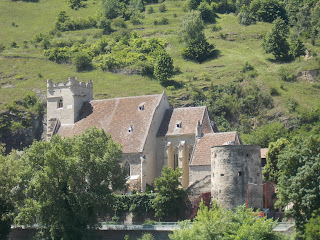 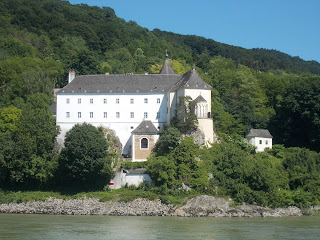 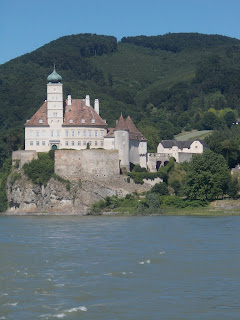 We kept seeing all the motorhomes parked on the banks of the river, could this be the way we travel through Europe next time? 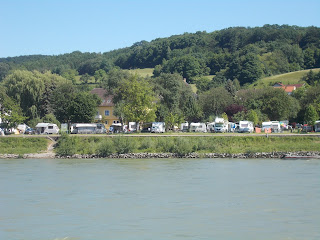 We enjoyed our lunch and relaxed all the way to Melk. 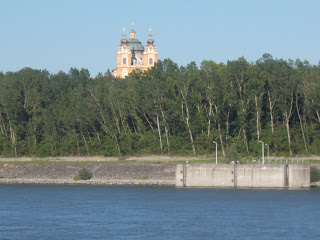 In Melk, Michael relaxed a bit more and I joined the group heading off to Melk Abbey 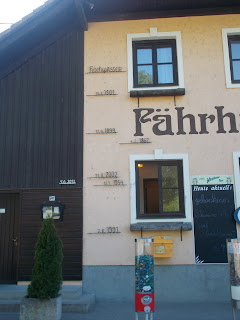 The lines marked on the side of this cafe, show the flood levels over the years. The top line is from 15.8.501 and the line on the dark wall on the left shows the 4.6.2013 flood level.

We drove through a wooded area on our way up to the Abbey and our guide told us that it was called 'The Wedding Forest'.
For every couple getting married in Melk the council plants a tree. If the couple subsequently divorces they are welcome to go and cut down their tree. But as the trees are not marked in any way, and it's now a large forest area, this doesn't happen and the town of Melk has a lovely area to enjoy.

Melk Abbey has been a Benedictine Monastery since 1089, it has changed with the centuries and is now still active in the community, with a school for both sexes and all ages. The gardens and buildings are stunning. It's extensive active library is still in use with the most modern books being 2014 publications.
It was an extremely busy place, with guided groups passing through one after the other very quickly. Our guide was told by one official that we were tour group number 107 that day and they had another 5 booked to go through. 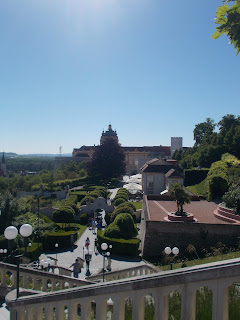 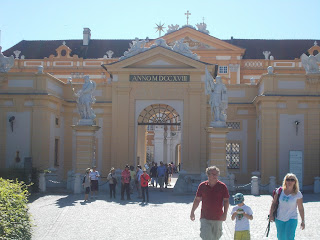 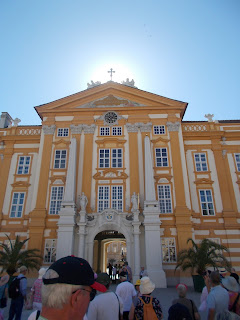 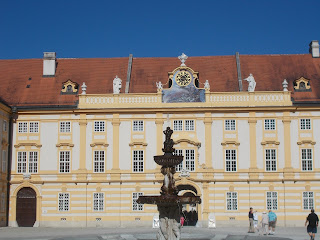 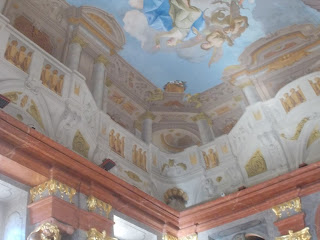 (This ceiling is flat - it's all a magnificent trompe d'oeil. There are no pillars or curves!)


The church was truly awesome (capable of inspiring awe – it certainly did that!) 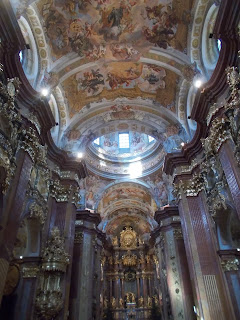 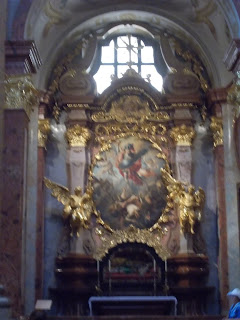 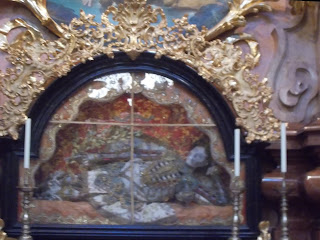 We were all back on board and sailing away by dinner time.
More great scenery and more locks to go through, and of course more delicious food. 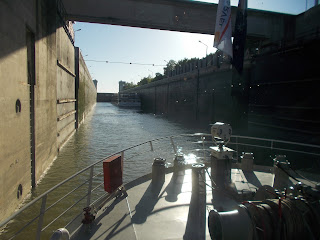 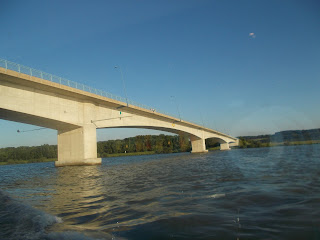 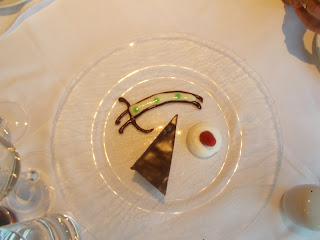 Posted by Big trip almost around AUS at 09:11