Back in Croatia – Plitvice Lakes and Zagreb

I must be getting used to these early mornings because I was awake at 5.25 am so I looked out of the window and took a photo of the dawn sky over Mostar. 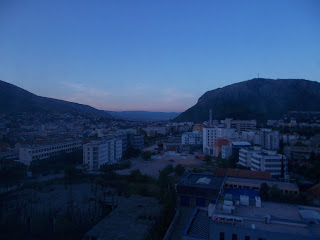 We were both awake, bags out, breakfasted and ready to go by 8.00am. We drove out of Mostar, with yet another reminder of the 90s war with building damage. 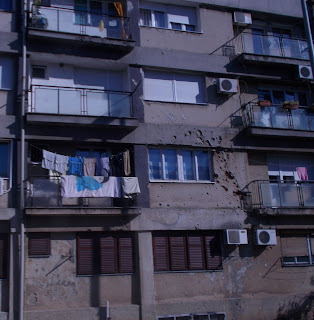 We had another drive back along the way we'd come and back through Customs into Croatia. Not such a long wait this time, only 20minutes. Then we were back on the motorway.
Our pee stop was one of the most picturesque of the whole tour, overlooking the river and a lovely old town which dated back to Roman times. 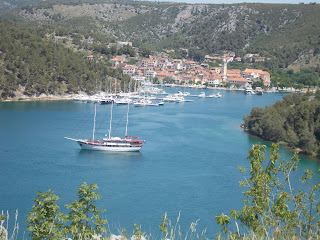 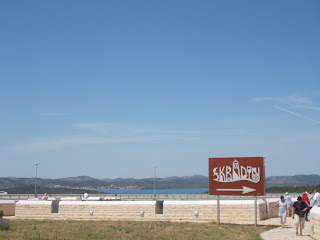 There were several food options and plenty of areas to sit and eat. Unfortunately one of our group walked around the back of the buildings, still in a public, grassed area, and got too close to the guard dog. The dog lunged at him and was literally at the end of its' tether, luckily just his trousers felt the bite, not his flesh, but he was badly shaken.

Then we left the motorway and headed into the countryside and the National Park of Plitvice Lakes. 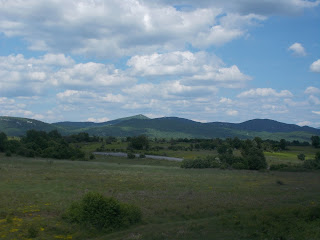 We were a little behind schedule and there was a bit of discussion between Antonia and our driver about when to drop the bags at the hotel and when to drop the tourists at the Lake. In the end the plan was to go to the hotel, drop off the hand luggage, take the tourists to the meeting place with the local guide and then the coach could return to the hotel and drop off the main bags.
Michael jumped ship (coach) with the hand baggage and headed off to our room. A walk around the lakes on steep inclines was not for him.
When we got to the Lakes and the meeting point, 8 of us decided on the easy option. 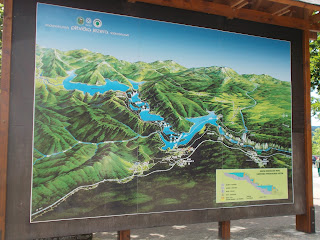 The full option involved a 6 kms walk which took you through a cave, over waterfalls, a couple of short boat trips, across more waterfalls, and then a climb us 240 steps before a steady uphill climb to the hotel.
It wasn't the 6 kms that put us off, it was the 240 steps at the end, and as it was a one way trail there would be no turning back.
Ralph and Hanny were with me and another 5 who joined Antonia on the easy option (both Ralph and Hanny have had ankle surgery in the last 18 months). 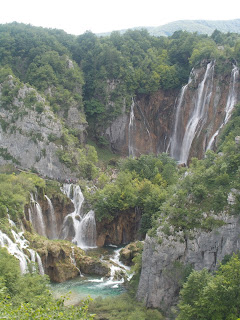 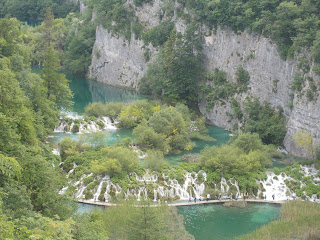 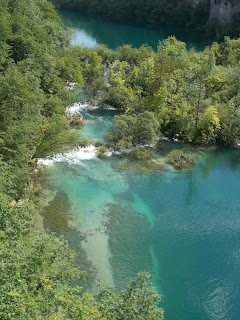 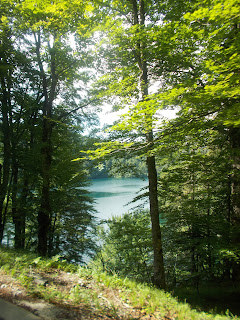 The easy option was definitely the right choice, we did a little walking and then got a ride on the local 'train' (a truck pulling a couple of carriages). We rode to the top of the trail and Antonia very kindly shouted us a coffee.
I had been expecting a very dramatic view, over the lake and waterfall but it did not have the WOW factor (that Lake Bled had).
Then we rode down again, to the hotel, arriving around 6.00pm.

I joined Michael in the room and started to get ready for dinner which was scheduled for 6.30pm. None of the main group were back so dinner was delayed until 7.00pm
Antonia had prepared us for a 'much lower standard' hotel (it was chosen for it's location, not it's furnishings).
It was something out of the 1970s (or earlier).
There was a lobby area which had nothing but a huge wardrobe in it, this lead to a sitting area. This had a large vinyl couch, a small table and two chairs, a cupboard with bench top and a tv. This lead to the bedroom, which had a large double bed and a large screen tv. Leading off the bedroom was a large bathroom with the most amazing shower unit. I was first to use the shower and was laughing so much that Michael came in to see exactly what I was doing.
Once in the shower unit one turned on the water tap – the first position caused water to flow out of the bottom tap, filling the bath. A further turn and the water came out of the hand held shower rose. Another turn and it flowed down through the high level spout , waterfall style. A final turn of the tap and the six jets along the side of the shower sprayed water along your body. An absolute, amazing delight, the sauce of my hilarity. Once I'd finished and climbed out of the bath, Michael was keen to have a go. 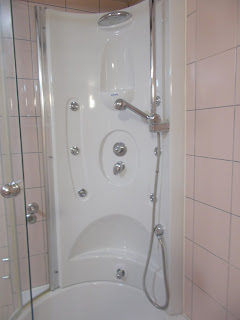 Freshly showered we got ready and joined the group to head off for dinner at a local restaurant.
We all realised how fortunate we are in Australia with our wide 'No Smoking' laws. We had had our starter when one local, solo diner, arrived and sat nearby; the first thing he did was light a cigarette. Michael asked Antonia to ask the waiter to do something, and he did. He asked the diner to please not smoke or move to the other side of the restaurant. The diner stayed where he was but didn't light up again until he'd paid his bill and was leaving. The restaurant had to balance between a major company, tour group and one solo, regular diner. The outcome was a happy medium.

The meal, sadly was not great and the service was very poor – probably the surliest, rudest waiters of the whole tour. Why it was that our group meals were less than average I don't know. The countries we visited can produce great meals, some of the meals that we had in local restaurants proved this. Do these restaurants resent group bookings or feel that as it's pre-booked and probably pre-paid that they don't have to make an effort?
My feeling is that you get a better meal, and better service by finding a small, local restaurant and not going along with the group outing.

The next day, the last day of our coach trip.
We were up, bags out by 8.15. We headed down to breakfast to discover that bags out time was actually 7.15!
This explained why there was no one else from our group in the dining room. I went upstairs from the dining room to explain to reception that we were an hour behind schedule. The girl immediately sent someone to collect our bags but Antonia was already on the ball, had realised that there were 2 bags missing, that they were ours and had personally gone to collect them.
The departure time was actually 8.30am. We had a hasty breakfast, back to the room at 8.25 and made the pre departure meeting in the lobby with a few seconds to spare.

We had to back track (again) through the National Park to the highway and head out to Zagreb.
We had a pee stop at a bar/ cafe. We were first off the coach and despite calling, knocking on the bar and shouting no one seemed to be serving coffee. We decided to just use the 'facilities' and then wander around the garden, eventually someone did appear to serve drinks to a few patient die-hards. 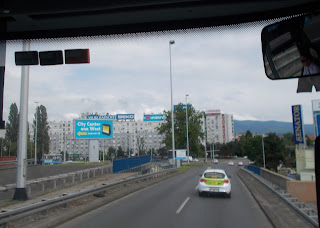 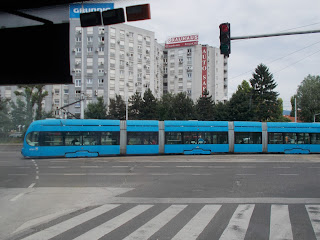 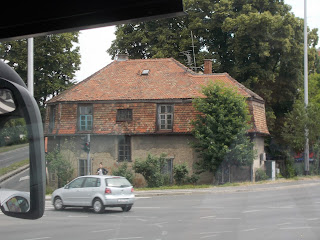 We arrived in Zagreb and after a lovely tour around the one way system, met our guide.
For the first time on this trip our guide was male!
We walked through the pedestrian area towards the main square but stopped to use the FREE toilets on the way.
Free toilets are courtesy of the town's mayor. 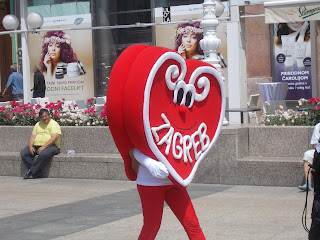 Our guide took us up a fleet of stairs to the old town.
Only about 140 stairs, but when we got to the top we stopped for a look over the town – standing next to the funicular railway station. We had climbed 140 steps, the funicular took 90 seconds! Everyone, apart from our guide, thought this ironic.

We then wandered along the old streets up to the square and St Marks Church Square. 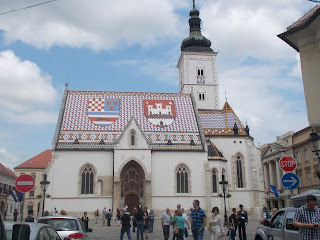 St Marks Church has an amazing patterned, ceramic roof. It was a public holiday in Zagreb and there were 2 ceremonial guards on the steps of the church. 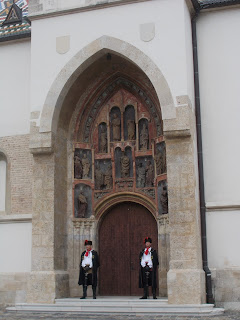 Everyone had taken their photos and we were about to move on and leave the square when we heard the clatter of horses' hooves. The tour was delayed a few minutes whilst we enjoyed the pomp of the 'changing of the guard'. 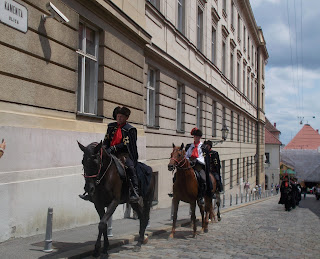 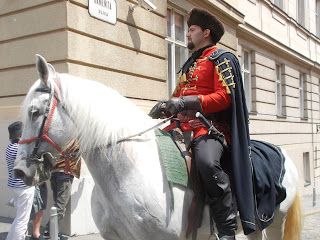 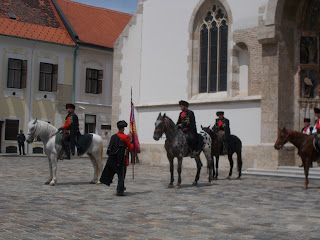 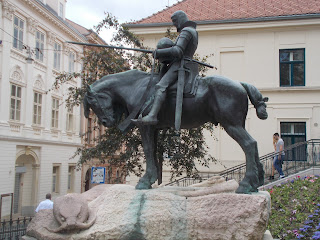 passing this statue of St George and the Dragon (which in this statue actually looks more like a catfish than a dragon), we had a glimpse of the market, and some lovely shopping streets before heading on to the Cathedral. 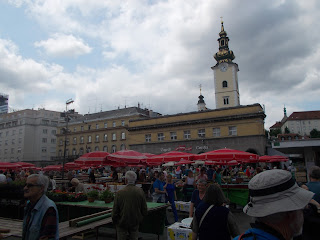 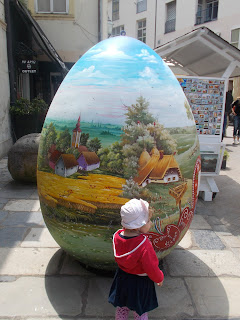 Here, our guide had to pause his tour as there was a national dance performance. An amazing, colourful sight. Our guide let us enjoy the spectacle before continuing his tour. 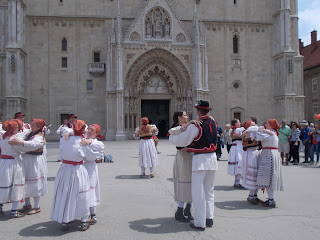 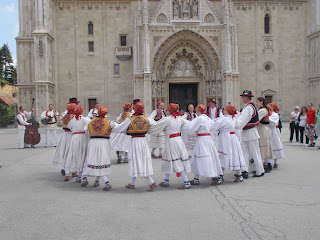 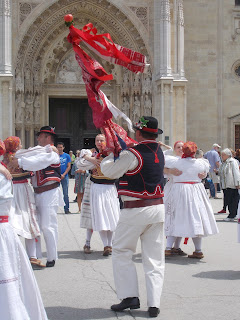 We went into the Cathedral and then the tour finished off back in the square.
We had got the hang of these tours now, so as soon as possible headed off to the nearest suitable restaurant that we'd passed on the tour.
The first only seemed to serve drinks so we carried on and found a 'pub' which served a selection of burgers and great beer. We had a beer each and decided to order a 'small' burger each and share a portion of chips. We ordered the beers, the waiter returned to take our food order and it was a few minutes later that we realised that we had forgotten to order 'small' burgers. When they arrived, they were indeed large meals but we gave it our best. 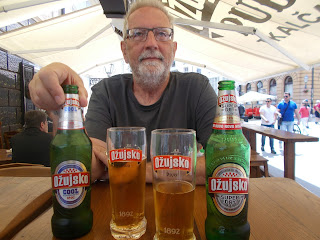 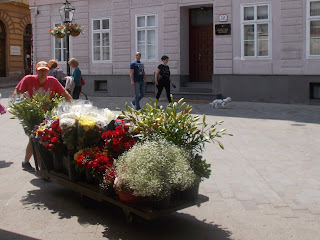 We sat on bar stools at the front of the bar, people watching and then we were approached by 2 young beggars. Girls aged around 7 or 8. I'd seen them coming so we were prepared, we told them to go away and their eyes got bigger, with more appeal. We said it again, more firmly and incredibly their eyes got even bigger. The third 'go away'd was not as polite and they did leave.
We had a very leisurely lunch and as we left the restaurant, we bumped into others from our tour, all of us joined up to head back to the meeting point. We boarded the coach and drove across town to our hotel – the Double Tree Hilton. We were delighted, a hotel that met all of our expectations, no bling, no pretentions, all that you need in a hotel room. We were all given a freshly baked, still warm cookie upon check in. Hilton has been in the hotel business for a long time, time to perfect it, but we are really pleased with this place. 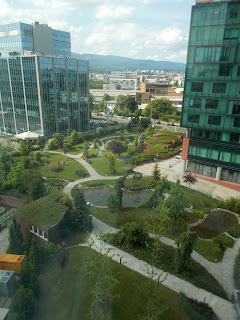 We unpacked and I hung Michael's shirt and trousers up in the wardrobe to reduce the creases. Michael took a couple of Panadol and went to sleep, as the time approached to get ready and head out to the Farewell Dinner, Michael decided to sleep on, missing the dinner. I got dressed and met the others in the lobby. We boarded the coach and drove over to the restaurant, passing through a lovely leafy suburb that could have been in any city of the worldl; it reminded me of some Adelaide suburbs.
Once again the food at our 'dinner' restaurants was only average and there was heated discussion over the drinks bill at the end of the evening. In the end, Antonia just paid the total and we would pay her back in the morning.
(Antonia then took one of our tour off to the emergency department as she had a bad cough which we all thought was turning into bronchitis. )
We returned to the hotel around 9pm, I packed the bags ready for the morning and our drive to Budapest where we were to board the boat for the next part of the tour – The River Cruise.
Posted by Big trip almost around AUS at 09:15