Back in the UK - St Albans

Back in the UK, in the lovely city of St Albans, a lovely old town, with a great street market held two days a week (Wednesdays and Saturdays).
Michael's brother lives within easy walking distance of the main street and I wandered down there after breakfast to get a few supplies – (UK power adapter, jelly beans, hair gel..).
We had a very, very lazy day – basically doing nothing.
The next day was Saturday and the start of the Alban celebrations.
The celebration of St Alban, patron of St Albans and Britain's first saint.

Alban lived over 1700 years ago as a Roman-Briton citizen. He was executed on 22nd June.
The celebrations began at 11.00am with a re-enactment of the arrest of Alban, the soldiers then marched Alban down the main street from St Peter's church to the Town Hall where he is put on trial. He is then marched to the Abbey and executed. 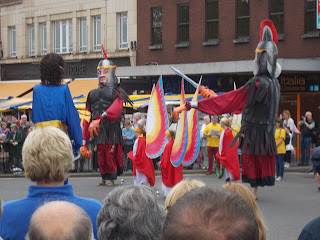 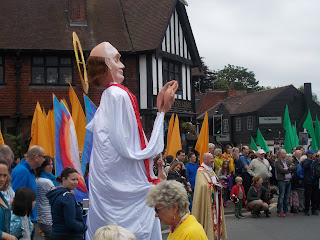 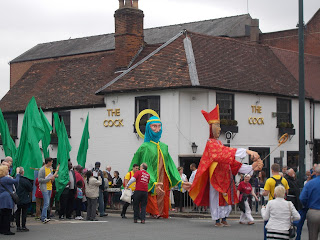 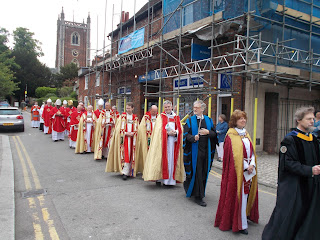 Great puppets, lots of clergy and lots of spectators. The Archbishop of Canterbury was in attendance but prior to the official proceedings was spotted checking out a hat stall in the market.
We didn't follow the parade down the street but were pleased that we had seen the arrrest of Alban and the start of the parade.

After lunch the weather changed, the sun disappeared and it started to rain. Bother! My washing was on the line.

The next day we had a nice slow Sunday morning, reading newspapers and then after a light, early lunch we borrowed the car (Michael had been put on the insurance, so could legally drive), and drove into West London to meet up with Michael's old mates. They were hosting a barbecue and the weather was looking promising.
When in UK we don't often use the M25 motorway but figured that it wouldn't be blocked on a Sunday lunchtime, it was quite a smooth drive and we were there within the hour.

The weather was kind to us, the food was amazing – beautiful salads, great meat and seeing old mates again was fantastic. Some of the friends had not been able to attend our previous meetups so Michael had not seen some of them for over 20 years! 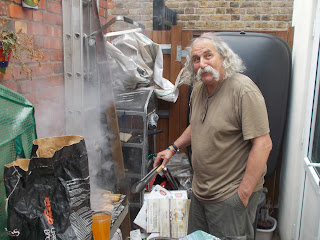 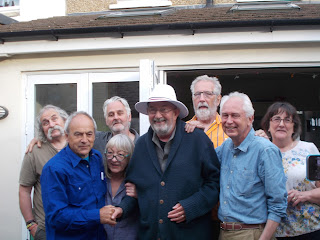 We didn't want to drive home too late so bid our farewells around 9.00pm and headed back to St Albans.
The next day we sorted out a bit more of our itinerary, booking a ferry over to Ireland and some accommodation over there.
The following day Michael's niece was heading off to a little country town to meet up with old friends and invited us along for the drive.
Olney was a delight. Whilst Clare went off to meet friends we walked up and down the main street, found a nice cafe for lunch then met up later for the drive home (St Albans). 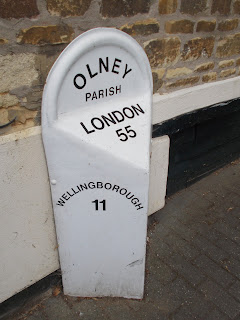 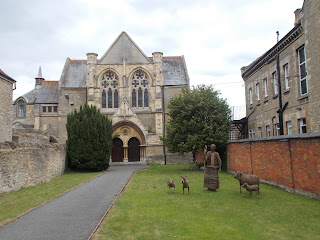 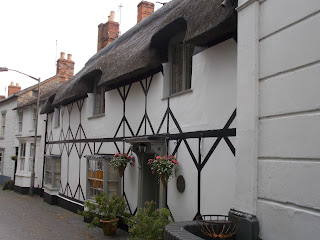 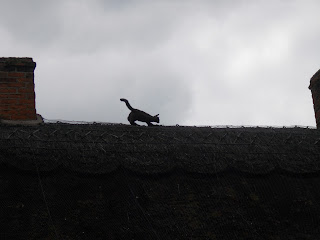 (A cat on a hot thatched roof? It's made of thatch too) 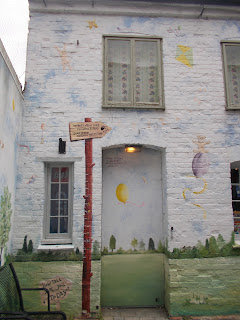 (Directions to the toy shop, in Olney) 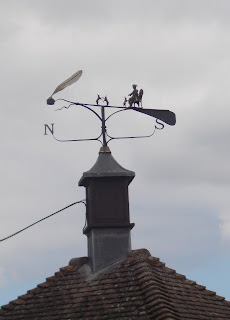 The next day was the day before Clare headed back to Australia and we headed across country to stay with my brother, in Reading, for a few days.
We all went out to a carvery restaurant for lunch and then spent the afternoon packing.

Clare had suggested that as we were heading west of London, we share her taxi to Heathrow airport and then carry on, on the M4 to Reading. The taxi driver quoted a price and it was just a little more than getting the airport bus to Reading and then public transport to the house, without dragging bags or walking – yep, good idea.
Our luck on the M25 deserted us, the traffic was very stop, start – with more stop than start most of the time.

We got to Heathrow, bade farewell to Clare and carried on to Reading.
Posted by Big trip almost around AUS at 03:38