A day out in London


Reading was to be our base for the next 10 days. My brother was turning 65 and we were going to spend time together, going out and about.
The next day was John's birthday, we just lounged around, just going to the shops briefly for a few things. We persuaded John to take us to an Aldi supermarket, we checked out the specials - the non food ones and I found a pair of trekking sandals - worth the visit. 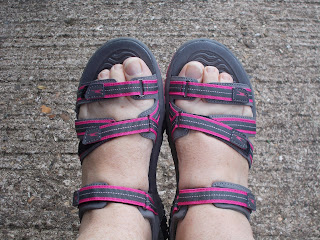 (We love Aldi, can't wait for them to finally open stores in Western Australia).
Then we sat in the back garden enjoying some very welcome English sunshine. For afternoon tea, we had cupcakes – white chocolate and raspberry for John, chocolate and sprinkles for Pauline and I had caramel chips and dark chocolate ice cream flavour. Michael tried to make me feel guilty by just having an iced bun (didn't work!). We put a few candles on the cup cakes, and sang Happy Birthday.
Then we drank our tea, had a few more minutes in the sun before the clouds appeared and we felt the first drops of rain.
The next morning our out and about trips started.
We all got the bus into town, the train 'up' to London, where we met Andy and Kate – my nephew and niece.When we arrived at Paddington station, Pauline asked me if I wanted to have my photos taken with Paddington Bear - did I ever!! 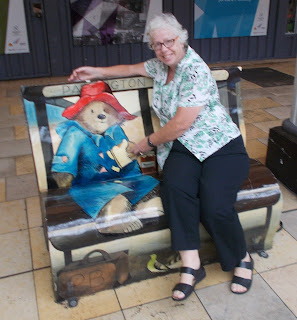 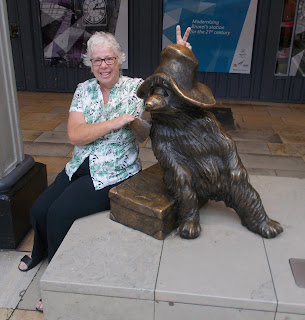 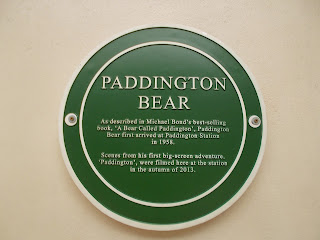 I' ve been a Paddington Bear fan for many years. I have a large Paddington and Great Aunt Lucy at home, they've been with me since 1973, one of the first presents that Michael bought for me.
I absolutely loved the Paddington movie that I watched on the flight to Frankfurt, back in May.
(The stuffed toy first appearing in 1972, although Michael Bond's books first appeared in 1958).

We left John waiting for Andy and Kate and walked around to the relevant platform. We were really lucky, Paddington was alone, no children cuddling him. I sat on the bench next to him with a huge grin on my face. Then I moved and sat next to his little statue. The day was shaping up very well, I was very happy.

We rejoined John and by this time Kate had arrived, Andy turned up shortly after. We were set to go. We walked out of the station, to the canal and walked along the canal a short distance to the boarding point of the canal water bus, to Camden Lock. 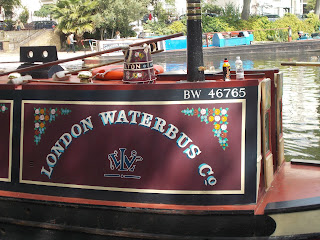 It was busy by the canal and the queue was quite long. The boats were scheduled to leave on the hour, every hour but as the tourist season had started they were running extra boats on the half hour. The first boat started to board, it filled up and as there were 6 of us we couldn't squeeze on. At least we were first in line for the next one. Only half an hour to wait.
Half an hour later, we were on board. The sign by the steps said to please go backwards down the steps, and the crew told us to. So we did. We were the only ones to do so, no one else read the sign, or if they did didn't comply, and the crew didn't mention it again. It apparently brings bad luck, but I'm not sure if that's to the boat or the person involved.

We cast off and cruised effortlessly down the canal through Little Venice. We passed lots of house-barges, lots of people out and about. We passed under Edgeware Road, through the 272 feet long tunnel. In the old days the boatmen would 'leg' the boat through (lying on their backs, legs in the air, walking along the tunnel's roof), today we had a motor on the boat. 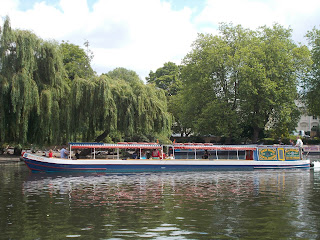 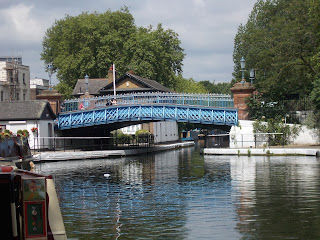 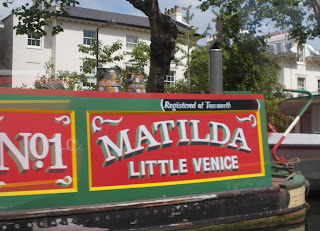 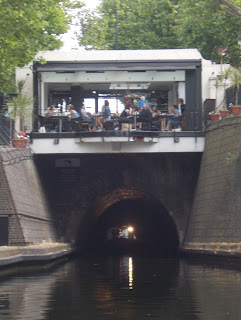 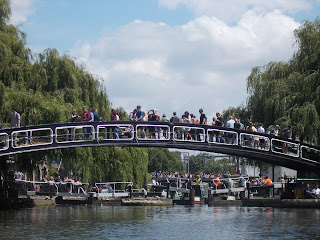 We made a stop at London Zoo to let off those passengers going to visit the zoo then carried on to Camden Lock. This was so busy, it was chock-a-block, we could only shuffle along, single file through the crowds. Once we got to the High Street we were able to form a huddle and discuss the next move – looking at the stalls, walking through the market or moving on. We voted to move on.
We stopped for lunch first though, pub grub. Sausage rolls, chips, sandwiches, coffees, cider, beer. (that was the total lunch, not just one person's lunch).
Then we got a bus towards Covent Garden, where we were going to visit the London Transport Museum. Towards Covent Garden, not to Covent Garden as we had to detour due to the London Gay Pride March.
We got off and walked the rest of the way. The boys and myself went into the Museum whilst Pauline and Kate went off to wander (they wandered down to Trafalgar Square and enjoyed watching some of the parade.) 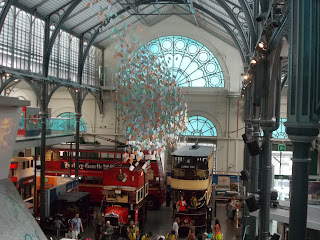 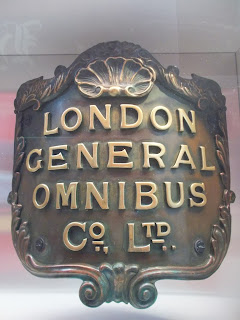 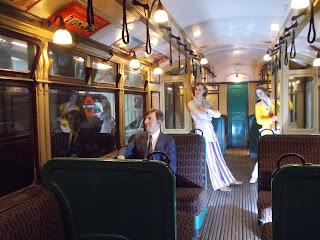 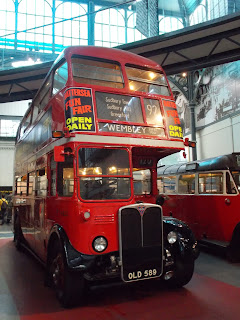 We met up afterwards and moved on through the colourful throng, had a tea and coffee at a nice little bar and then went on across the river to make our way over towards London Bridge. 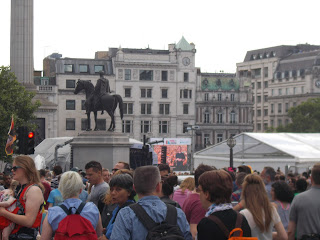 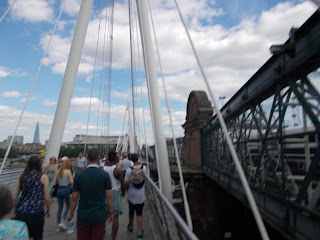 I used to live right next to London Bridge when I was a student, way back in the early 1970s. It was quiet and a little shabby. Not now. I didn't recognise the place, not only are the old warehouses and wharves now trendy apartments and cafes but the sky line across the river is totally different. The beautiful old buildings are barely visible, one or two spires protrude above the glass towers. The Monument to the Great Fire of London is just visible, still standing tall and proud.
I didn't recognise the place, it was so ugly and not how I remember London at all. 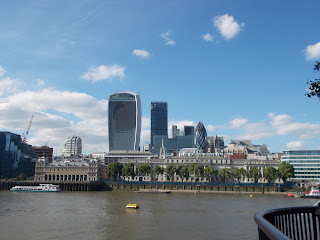 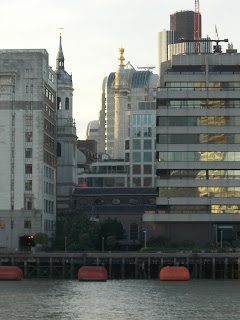 It may be progress,it most definitely is about money (it is the City of London), but try doing that in Paris around the Sacre Coeur, Montmartre or the Eiffel Tower. All high rise in Paris is over in La Defense.
It proved one of two things – that it's true that you should never go back, or I am getting old, (maybe it proved both).
We had a lovely meal at a very nice cafe in the courtyard of Hays Gallery, the converted Hays Wharf. It was nothing more than some old brick walls when I walked around the area on Sunday afternoons.

After dinner we had a short walk along the river bank back to London Bridge station, Andy headed off for his train home and the rest of us got the Underground tube train to Kings Cross/ St Pancras where Kate headed off for her train home. 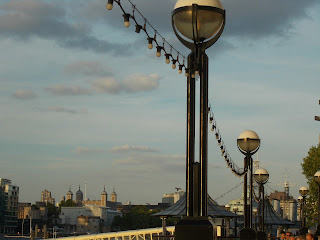 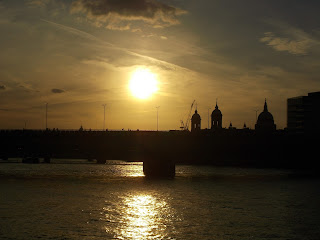 The four of us continued on the tube to Paddington (no more cuddles for Paddington Bear though) and then the train back to Reading. The buses up to John's house only run every hour at night, and we would have a 20 minute wait so we grabbed a taxi home.
After a long day, with the excitement of Paddington Bear, Transport Museum, Pride march and walking around London we were too tired for a cuppa tea. Straight to bed.
Posted by Big trip almost around AUS at 13:58