A new kind of adventure - an organised tour

Here we are again, back in Europe.
This time around we're on an organised tour, something of a first for us. We usually just book a flight and then do our own thing, but Michael fancied a river cruise and we decided to combine it with a land trip - touring around the Adriatic.
10 days touring from Venice to Budapest via Lake Bled, Dubrovnik, Mostar and Sarajevo, and Zagreb, then 14 nights cruising from Budapest to Amsterdam.
Our very good friends, Ralph and Hanny are joining us on the tour and at the end of the organised bit we'll have 3 days in Amsterdam together before they head off to do their own thing in Finland and Poland and we head over to see family in UK.

The adventure began at midday on Wednesday May 20th when our great friend and neighbour, Julia, arrived to take us to the airport. We arrived with so much time to spare that we had a few minutes hanging around before the check-in desks opened. Despite Michael's assertions that I was taking too many clothes and the size of our suitcases we were well within our 20 kg limit ( airlines may have a 30 kg limit but the cruise boat and coach are still on 20 kgs). For the record my bag was 18kg and Michael's was 12kg, giving us plenty of space for all those souvenirs!
Ralph and Hanny arrived, checked in and joined us upstairs for a coffee before boarding.
True to form I when we'd gone through security I was selected for an explosives test, swabs taken of my bags and the scanner passed over me. This has happened to me everytime I have flown recently. We all had a good laugh and the girl said that it wasn't anything more than the fact that she was free and I was walking ahead of the others, on my own. So from now on I'm going to walk with a crowd and see what happens. 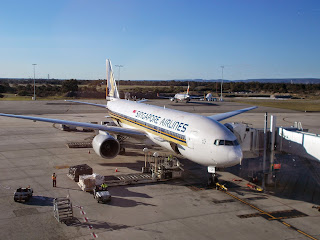 It was, of course - with Singapore Airlines, a good flight over to Singapore and we had less than an hour transit time. We found the right gate and went through security - I didn't get  swabbed but Michael's carry on bag was scrutinized and we had to open a box of insulin pens to show them what they actually were.
This flight was the long one, the really l-o-n-g one over 12 hours to Frankfurt.
I think we each managed to get a few hours sleep but it  really is getting harder to handle long hauls as we get older. The time was not wasted, we watched a couple of movies. I had Michael intrigued as I kept laughing so much that when he'd finished watching 'American Sniper' he found the one I'd been watching and was soon laughing too. The movie?
Paddington.
We are both great Paddington fans and really did enjoy the movie. lol +++
Maybe we should have watched the movie a second time because the time really went very slowly, but eventually we landed in Frankfurt. Despite it being a very busy airport there aren't that many Lufthansa flights to Venice and we had a 6 hour wait. Some great coffee and lovely bread rolls helped pass the time and soon we were ready to board. We had to go through security again, different rules for different airports, this time the ipads had to come out of the cases. My luck was holding and I passed through without incident, so did Michael, so did Hanny but Ralph was stopped and all his bags inspected.
We had a very short wait at the gate before being called to board - boarding was self service - scan your own boarding pass and proceed through the turnstile when you get a green light. This was explained in German and English but thoroughly confused a couple of Japanese tourists who really held up the line, the attendant had to move 2 steps and help, we couldn't help but think that if they'd done away with the self scanner, got the attendant to scan everyones' pass - you know, the old way, - we would have got through a lot quicker.
It was only a 1 hour flight and our tickets told us that we would be getting a snack.
This 'snack' was handed to us as we boarded - a chocolate bar.
Anyway, thoroughly jaded, jetlagged and grumpy we landed in Venice and quickly collected our bags ( we'd cleared EU customs in Frankfurt) and headed out to find our tour representative. Then we out into traffic and were soon at the hotel lobby where our tour manager met us.
Our trip has really started.
We were so glad to be in a room and absolutely delighted to see the roof tops of Venice in the distance. 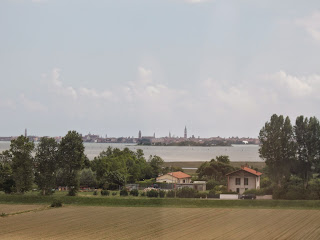 That night we joined the other 'tourists' and enjoyed a 'welcome dinner' at the hotel. (nothing out of the ordinary, 2 courses of pasta and some blancmange/ vanilla creme dessert.)
At 8.30 I made my apologies to the table and headed up to bed before I fell asleep and collapsed face first onto the dinner plate. Michael put the kettle on to make me a cup of tea but I was asleep before it boiled.
Tomorrow the touring starts - wake up calls, coach seating arrangements, ferries, local guides etc. hopefully there will be some free time to load photos and write some more blog.

Posted by Big trip almost around AUS at 07:45