All good things come to an end

We returned to St Albans, once again receiving a lovely warm welcome. We spent the weekend just relaxing and chatting. I paid one last visit to the market, and walked around this nice town. 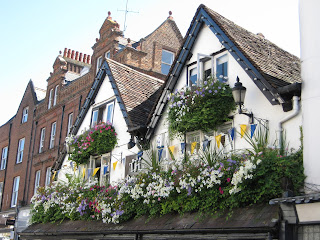 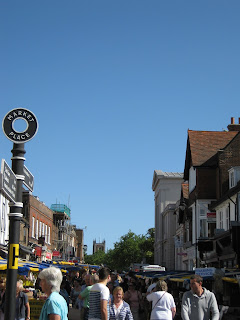 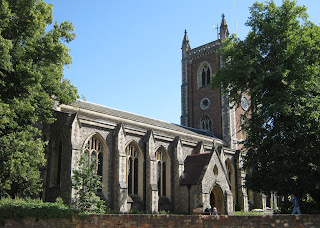 It was time to wind down and get organised to return home. The first job was to sell our trusty chariot, our little Citroen Picasso. We took it along to our favourite St Albans mechanics - Goldcrest Motors - and asked if anyone was interested in buying it. One of the mechanics said that he knew someone who might be and he'd be in touch. On the way back we spotted Rebecca, the previous owner of the Picasso. We stopped for a chat. She still missed the car although she has a new car now. We told her that we might have a buyer but that it would probably be sold for scrap after the tax ran out in November. The next day we had to return to Reading to deposit all of our belongings, to be sorted out and packed ready to fly out.
Cleaning out the car revealed a little treat. When we bought the car we were delighted to find the handbook, but since the first week we had been unable to find it again. We presumed that we had inadvertently thrown it out when we cleaned the car. There it was in the glove box - in a grey folder, in the grey lined glove box, under the MOT certificate. A bit late but at least we can return it with the car.
That evening in Reading we got a phone call from Rebecca wanting to know if  we still had the car - her boyfriend's car had blown the engine! She made an offer and as her offer beat the other by 50 quid we agreed to deliver it to her in the morning. (She didn't want it to be scrapped any more than we did).
So bright and early next morning - it had been a while since we'd been up with the commuters - we  drove back to St Albans and by 10.00 am we had the cash and were back at Jim's house.
We spent a few hours with Jim, Joy and Claire before bidding them a fond farewell and being driven back to Reading by my kind brother who had driven over just to collect us. We had intended to get the bus Heathrow, then bus out to Reading but John's offer saved us around 30 pounds each.
The next day I started packing - a daunting task. When Pauline came home from work we took time out and went out for a drive in rural Oxfordshire. We stopped for lunch at The Waterfront Cafe, by the Thames, in the village of Benson. A lovely setting and a nice cafe too. 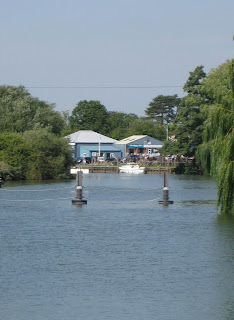 After lunch the five of us, John, Pauline, their daughter Kate and us two walked along the river and then crossed the Weir and sat gongoozling again at Benson Lock. This lock is operated by a lock keeper, probably because it's on the River Thames not a canal.  The sun was shining and it was really pleasant, Kate and Pauline were lucky enough to see a kingfisher on the river bank. 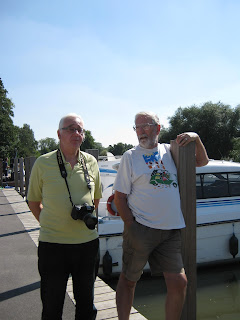 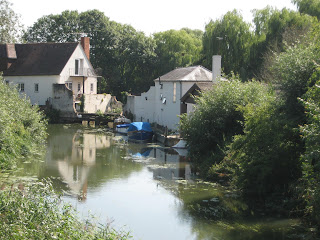 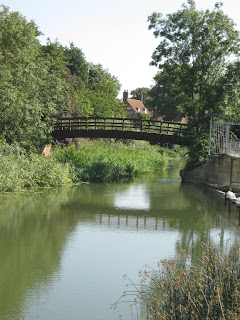 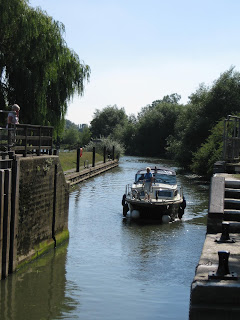 That evening we went out again, this time we found the Cunning Man pub in Burghfield. We arrived in the evening sunshine and had thought of eating al fresco but down by the canal the temperature had already started to fall so we had a quick change of mind and ate inside.
The next day - the day of departure - arrived. We persuaded John to drive us into Reading so that we could change our remaining Euro and Pounds into Aussie dollars - (the Post Office would give a much better rate of exchange than anywhere at the airport).  John took the opportunity to quickly show us a hidden side of Reading - Forbury Gardens. What a delightful place. A haven for workers at lunch time I'm sure. 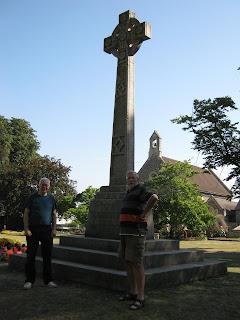 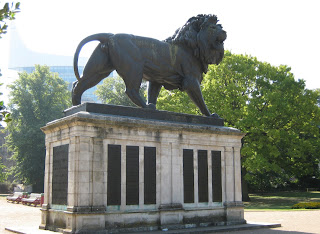 Then it was down to business - packing. I did discard some things, 3 pairs of shoes, a pair of shorts, 2 pairs of trousers and a toilet bag. I put out 3 shirts, 1 T shirt and assorted toiletries to donate to a charity shop but Pauline mentioned that they could use them at the nursing home where she works, so they were donated to there. Then when all was packed we weighed the bags!!!! At the last minute I took out one large (4kg) item and put it in my carry on bag, then it was done.

In the afternoon John drove us to the airport, we had a good straight run down M4. The day before a truck had overturned spilling its load over the lanes forcing all traffic down to the hard shoulder only - chaos. Today we were lucky.
We arrived nice and early and went straight to a check in desk - no queue. Then it was the moment of truth - weighing the bags......... 1st bag weighed 27kgs (Heavy tag attached).
2nd bag weighed 23kgs.
3rd bag weighed 9.3kgs.       Lucky we each had that 30kgs allowance!!!
Then it time to go through security - usually a long drawn out affair but the notice said that the current time to pass through security was 3 minutes. We went through, and it was true - no queue, we were through in no time at all. Then it was time to sit and wait. To use up our last pounds and pence we bought coffee and then had a sandwich (this might have been a mistake).
Finally it was time to board and then we were away.
It's a long haul from Heathrow to Changi, Singapore at the best of times but a few hours into the flight Michael felt unwell with stomach pains, then he got 'd and v'. It must have been that chicken sandwich at the airport - bloody European food!!
The stewards were very attentive and kind but basically all they could do was provide sick bags and fluids. They asked if we'd like them to arrange transport for us at Changi as it's a long walk between Terminals, 'yes please'. So when we landed we waited until all passengers were off then we were helped off and got a ride on an airport buggy to the Passenger's Special Services lounge. When it was time to board the flight to Perth they took Michael down to the gate, and down the air bridge to the plane, in a wheelchair - first on board. By now Michael was just getting nausea and was very tired so he managed to get some sleep. The hostess opened a can of lemonade and put it on one side with his seat number on it and every time she saw his glass was getting low she'd top it up with some 'flat' lemonade. When we were nearing Perth we asked if we could have a wheelchair at Perth to get through immigration as didn't feel able to walk there or indeed stand in a queue. Although it hadn't been arranged beforehand, and we had left it late to ask the staff contacted the ground staff and we had a chair and 'driver' waiting. There were 3 wheelchair passengers off the flight and we all were pushed through to the front of the queue at immigration and our lady waited with Michael whilst I collected the baggage, which was already riding around on the carousel. We didn't like to shock Graham, our neighbour who was meeting us, by having Michael pushed out in a chair so he stood up and leaning on the trolley we were escorted to the front of the customs queue and we walked out.

The journey home did seem like a long way, we have got used to it but we can see what visitors mean now.
When we got home we had a brief tussle with the keys but were soon back in residence. It was around 2am when we tumbled into bed. Gosh it was quiet and dark- we'd almost forgotten how quiet it is here. We can see how some European visitors find it strange. In Europe you never have total silence, there's always some noise - traffic, sirens, alarms, animals, people, and there's usually street lights. We fell into a lovely sleep but were jolted awake a few hours later by a massive thunder and lightning storm overhead. This passed over quite quickly and the silence returned, we slept on.
Late the next morning we checked out the car, found the keys and drove into Guilderton to dutifully vote in the General Election. Later on I drove into town to get food for a few days and then we settled back in.
We are gradually getting back to normal, and we'll make a start on all the weeds soon.
We have about 3 weeks before we're off in the motorhome - maybe that will be another blog!!
A Bientot!
A big thank you to everyone who has put up with us, helped us, nurtured us and supported us by reading this. Thank you all. 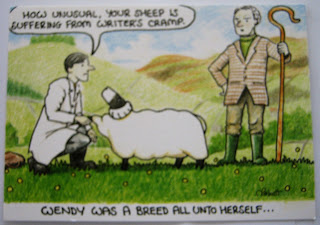 Posted by Big trip almost around AUS at 03:07